She said the Black community is outraged after the student posted a photo of himself with a girl, who is not a Trinity student, holding a sign that said:  “If I was black I’d be picking cotton. But I’m white so I’m picking you.”

Tshiela took a screenshot of the posting from the student’s social media account before it was deleted and reposted it on the BLM Manchester Instagram page.  The student is a member of the high school’s football team, she said.

“I was disappointed, but not surprised because I have friends that went to this school, and I’m also a graduate of a school in Manchester and we’ve seen things like this happen before, so it’s not the first time,” Tshiela said. “I was very disgusted but also very hurt for the Black students who go there because I know what it feels like to have things like this happen.  It feels like you don’t have a voice.”

Tshiela said the sister of her roommate, who is Black and a graduate of Trinity, currently attends Trinity and told her of the posting.  She said the school’s Black students are afraid to speak out publicly.  However, she said her roommate’s sister told her, “All the Black kids are mad.”

She said BLM Manchester wants to express “our support for the Black community that has been affected by the posting, especially the students at Trinity.  This is disgusting and appropriate action needs to be taken,” she said.

Manchester Ink Link reached out to the school for comment, but did not get a response.  Thursday night, Trinity President Nathan Stanton apologized to all affected by the social media post.

The statement he issued said, in part:

“We received a report this afternoon that one of our students made an extremely inappropriate post on social media. Student disciplinary action is confidential, but I can assure you that swift, appropriate action has been taken as this type of behavior does not reflect the teachings of the Catholic Church or the Mission of Trinity High School.”

Stanton also said, “This behavior was unexpected and unbecoming of a Trinity student. While I am disappointed this happened, I am grateful this has been brought to our attention so we can continue to form students in faith, virtue, and character in partnership with parents. On behalf of our entire administration team, I would like to apologize to all who are affected by this social media post. If any student or parent needs to speak about this event and need additional support, please reach out directly to Mr. Gadecki, Ms. Risdal, and/or myself.”

Tshiela noted that the statement does not mention racism.

She said people are saying Trinity acted immediately but, she said, it has to be understood that action was only taken because the posting became public.

Tshiela said when she first saw the “homecoming proposal” she thought it was a hoax because when she googled the phrase, she saw that other students across the country have done the same thing.  A Sarasota, Fla. student in 2018 used the same phrase in a prom proposal.

“What that says is this was a very intentional act because he found it and it raised questions in news articles and he still decided to use it,” she said.

“The Mayor’s Multicultural Advisory Council has been made aware of racist photos of high school students standing in front of a homecoming ‘proposal’ that has been circulating online.

Statements like this undermine the vision of the Multicultural Advisory Council, which is that Manchester is a city where full and equal participation exists across all aspects of life and diversity is valued as an integral part of our community. This deplorable action undermines our vision and our effort to make our city a more welcoming and vibrant community for all.

We call on the leadership of Trinity High School, the New Hampshire Archdiocese, and other community leaders to take swift actions to ensure Manchester students’ safety and well-being are protected. Further, we want to express our support for the Black students in our community affected by this. Finally, we will continue collaborating as a council to achieve our mission of becoming a safer, diverse, and more welcoming community.”

Also making a public statement on this matter was the YWCA of Manchester, which issued the following early Friday afternoon:

YWCA New Hampshire has been made aware of horribly racist photo of two Trinity High School students standing in front of a homecoming “proposal” sign that has been circulating on social media.

The statement and sentiment expressed in the photo are reprehensible and make light of the real struggle and challenge that Black Americans have navigated for centuries. These attitudes and ideals are not simply “kids being kids” they are harmful and trauma-inducing to the Black community, especially Black students.

YWCA New Hampshire is on a mission to continue to work towards eliminating racism in our community. Much of that work means demanding accountability when behaviors perpetuate troublesome ideologies that lead to miscommunication, oppressive policies and decision making, and violence.

For these reasons,  we are strongly encouraging the leadership of Trinity High School, the New Hampshire Archdiocese, and Mayor Joyce Craig to publicly condemn this racist and harmful action – not to ignore it.

Seeing imagery and language like this is offensive and should not be tolerated in a place of faith and learning — especially not in a city as rich in culture and diversity as Manchester.

While this is a call to action to Trinity High School, the New Hampshire Archdiocese, and the Mayor’s office, we want to extend an invitation to conversation about the public health crisis that is racism, and how we can work collectively to stunt its reach.

Our doors remain open to all who would like to work in collaboration as we continue to create a Manchester, and New Hampshire, that is safe and free for all.

On Friday afternoon Central High School’s principal Debora Roukey issued the following statement, which included the offer of access for students in need of support to “trained professionals”: 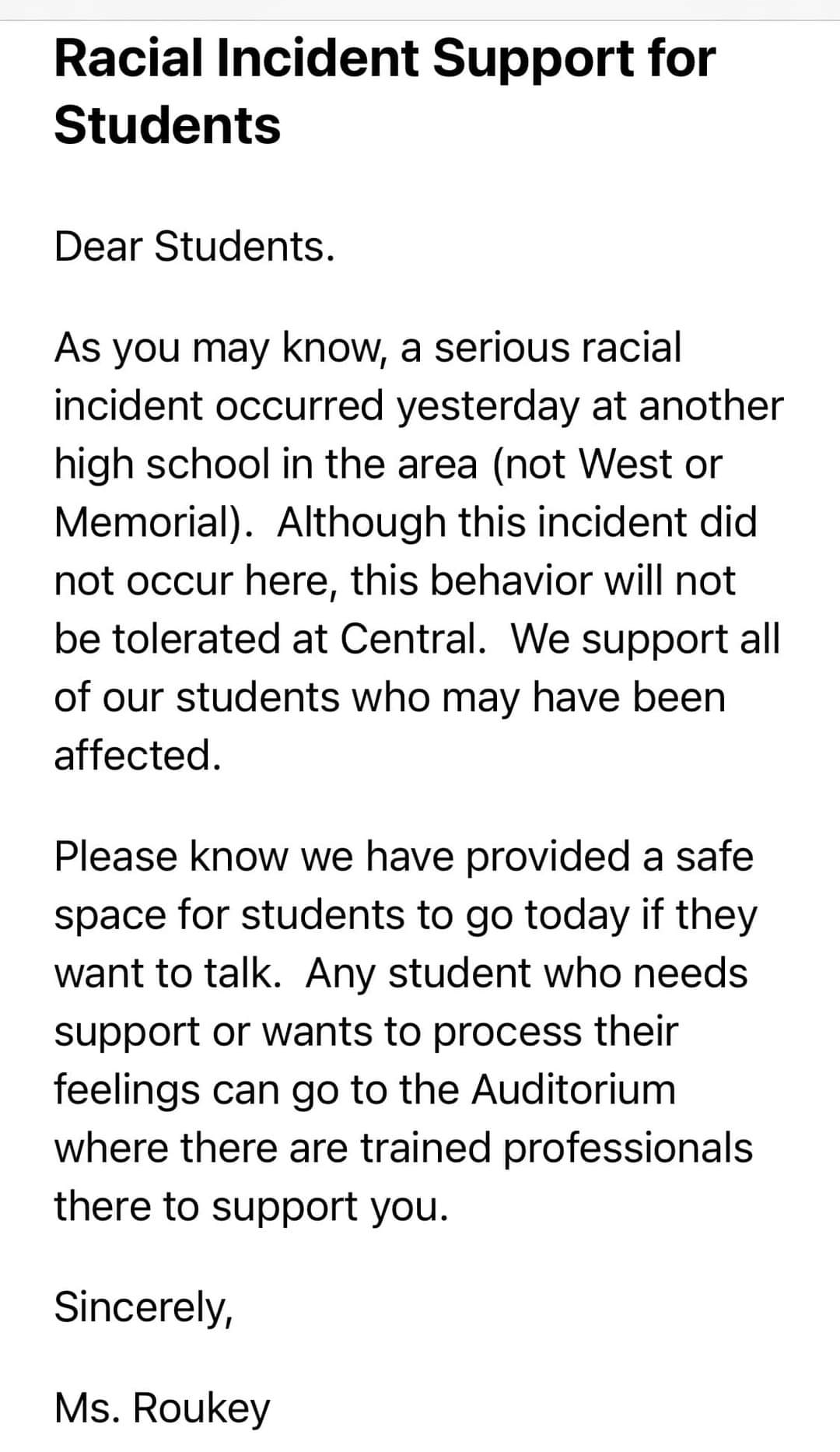 “On Thursday, a photo containing a troubling, racist message went viral on social media. The photo was posted by a Trinity High School student, and while the school is not part of Manchester School District, we know that this hurtful act negatively impacts our students, families and staff.”

“The diversity in Manchester makes our community stronger, more vibrant and welcoming. This kind of behavior has no place in our city, and we stand in support of our Black students and all students of color and their families.”

“We are fortunate to have Chief Equity Officer Tina Philibotte on our District leadership team, who pulled in community partners, including GEAR UP, to provide space and support to students as they process their emotions as a result of this incident.”

Tshiela said she has heard from other students and alumna of the Catholic high school that this isn’t the first time something like this has happened at the school.

One year, she said, a teacher called a Black student a monkey.  On BLM Manchester Instagram account, moss.dummy wrote that when they went to the adjacent Catholic middle school, where Stanton was the principal, a Black student in their class was “forced to chemically straighten her hair because her braids were not deemed acceptable per the dress code.  The diocese has been like this and turning blind eyes to racism.”

Tshiela said prior incidents of racism at the school were swept under the rug. This is the first one that has become public, according to Tshiela.

She said Trinity students tried to form a Black students union or multi-cultural social club late last year or early this school year but were denied because “the school claimed it wasn’t inclusive enough.  Anybody could join but the school denied it.”

Tshiela said that should be noted because “the Black students expressed the need for a safe place at that school and they’ve been denied. I think that’s something that needs to be talked about as well.”