MANCHESTER, N.H. – The Manchester Board of Mayor and Aldermen (BMA) held a series of special meetings on Tuesday, taking action on several topics that have cast a large shadow in recent weeks on the Aldermanic docket.

In the first special meeting, the BMA deliberated upon a pair of proposed zoning ordinance changes addressing outpatient substance abuse facilities in residential homes in a form of congregate living commonly referred to as “sober houses” or “sober homes.”

The first proposed change would alter the definition of a “family” under the zoning ordinance (see below), a distinction that managers of sober homes operating in areas zoned for single-family residential homes have claimed their clients meet in order to avoid requiring zoning variances.

The other change would re-classify off-street parking requirements for congregate living facilities of all kinds, including sober homes, to require at least one parking space per bedroom in the facility compared to one or two parking spaces for most types of private residences.

Manchester Department of Planning and Community Development Director Leon LeFreniere said the proposed changes were a way to provide clarification on the controversial topic, with numerous sober house facilities operating in areas where they are not allowed by right under the city zoning ordinance.

City Solicitor Emily Rice said that the wording in the “family” re-definition was crafted to survive legal challenges based on comparable case law. However, Rich Girard, an announced mayoral candidate and advocate against sober homes aiming to circumvent the city’s zoning ordinance by operating in single-family residential areas, believes that the rewording could backfire in the city’s quest to crack down on sober homes in single-family neighborhoods.

“I can only hope the city will revisit those changes before enacting them.  There are real liabilities in the language, huge loopholes that will make enforcement impossible.  Moreover, that the sober facilities that are illegally operating haven’t voiced any opposition to these changes underscores my concerns,” he said.

The BMA approved sending the proposed changes to the BMA Committee on Accounts, Enrollment and Revenue Administration for review and a final report for the BMA on the items at a later date.

In the second special meeting, a public hearing was held to see whether a proposed charter amendment (see below) will go to the voters this fall that would provide substantial autonomy for the Manchester School District.

Supporters of the charter change noted that the complexity of the school district and city government meant that the expertise of the elected officials of what would become known as the Manchester School Board would make the Manchester School District run more efficiently and improve educational quality in the city.

Opponents felt that the language in the amendment was vague and could lead to more irresponsible spending without the BMA serving as a check on the bottom line of the School District’s annual budget as well as authority to issue bonds.

However, Rice noted that if the proposal was split up and some parts of it passed and other parts did not, it could become legally incoherent. 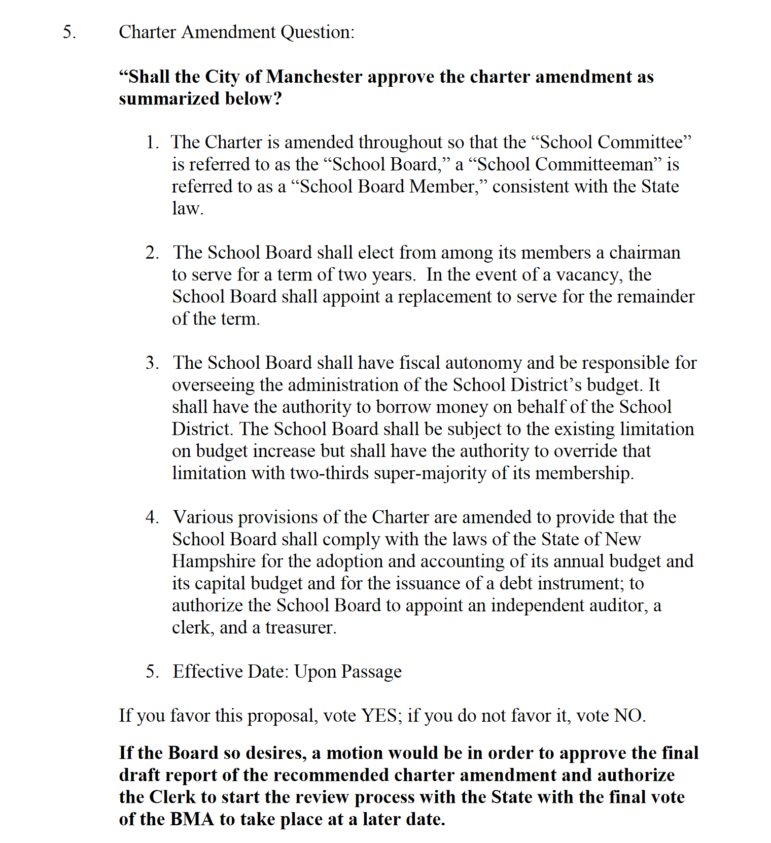 The third special meeting also saw the approval for Manchester Fire Department Chief Andre Parent to apply for a $1.25 million Emergency Operations Center grant as well as final approval of the initiatives proposed by Manchester Mayor Joyce Craig for the incoming $43.2 million in American Rescue Plan funding coming allocated to the city by the federal government.

Mayoral Challenger Victoria Sullivan held a press conference on Tuesday afternoon criticizing Craig and saying she should have gotten more input on how the city’s incoming American Rescue Plan funding should be spent before seeking initial approval from the Board of Mayor and Aldermen earlier this month.

Sullivan said she has filed a right-to-know request to obtain additional information on the methodology of the survey asking how the funds should be used, stating that a final vote on the funding should be delayed until four public hearings can be held.

Sullivan also criticized the small sample size of the survey as well as the fact that six percent of respondents in the survey did not hail from Manchester.

The survey took place from March to May 2021, the results can be seen here.

“I disagree with making any of these decisions without public input, that’s first and foremost,” said Sullivan. “The government works the people, they serve the people. They aren’t to make decisions on behalf of the people without obtaining input and seeing what the needs are, and we don’t truly know what the needs of the community are.”

On Tuesday night, she also reiterated her views that no vote on the funds should be taken until there is a replacement for Alderman Mike Porter in Ward 8 and there have been at least four public hearings.

Girard also voiced opposition to the mayor’s proposal, noting that the $3 million job resource coaching and higher education partnership with Southern New Hampshire University violated the city’s procurement codes, although Craig clarified that part of the plan would be opened up to Manchester Community College as well.

Sullivan and Girard were the only members of the public to provide statements against the proposal, with over a dozen people testifying in person and by correspondence in favor of the mayor’s plan, largely regarding the plan’s focus on housing.

The plan passed on a voice vote of the BMA.

“No matter who you are, if you live, work, or visit Manchester, the plan approved tonight delivers for you. Through these funds, we’ll be able to address the health and safety of our neighborhoods, support small businesses, increase affordable housing, add workforce development and college education initiatives, and much more,” said Craig.

“Tonight’s vote draws a clear line between Mayor Joyce Craig and her opponents ahead of this fall’s municipal election. Both of her challengers for mayor vocally opposed adding resources to prevent violent crime, providing $3 million to increase affordable housing options, $1 million in grants for small businesses, additional support for seniors, and infrastructure repairs throughout the city,” he said. “Mayor Craig has a clear vision to improve Manchester, while her opponents stand in the way of Manchester’s recovery.”

Following the vote, Sullivan released a statement calling the decision an attack on transparent governance, although she said she was not surprised that the vote took place, which she referred to as “rushed” and “rammed-through.”

“As cities across the country, both Democrat and Republican-led, are asking their citizens for input as how to spend these federal dollars in a lengthy, dedicated, and transparent fashion, our mayor has decided to barge ahead – no questions asked. In this election year, Joyce Craig wants to hoodwink Manchester residents on what she plans to do with millions of dollars of one-time federal revenue. She is giddy at the thought of paying for her far-Left pet projects,” said Sullivan. “When I am mayor, I will put the people of Manchester first, and I will reject this sort of dirty politics for the sake of the ordinary folks of our city. In addition, because this money is for one-time use, the city should come up with a plan to scale back this spending when the money is gone. I have not seen any indication that plans are in place to do that either. All in all, this a disappointing day for hard-working Manchester taxpayers.”