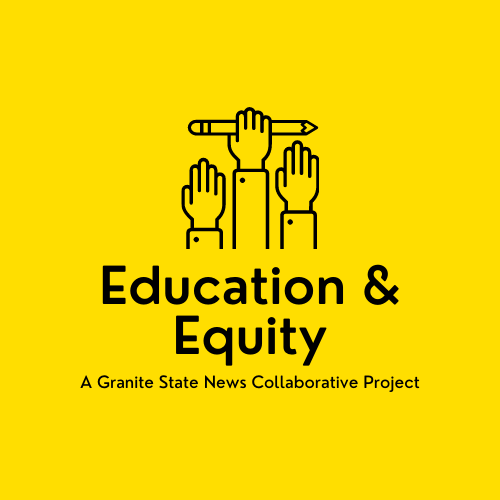 As a middle-schooler in Nashua, Joslyn Villavicencio wanted to challenge herself. But she was surprised to find it wasn’t as easy as just signing up for harder coursework.

“I had to push myself and had to contact teachers just to put me in the honor roll,” she said, “because I was noticing there was a disadvantage if I was in lower classes,” especially once she moved up to Nashua High School North.

It wasn’t just the rigor of the curriculum that seemed different, she explained — it was also the ways educators pushed and encouraged their students. Counselors gave her and her honors classmates information about applying to college. However, her friends in lower levels and the English language learning (ELL) program seemed to receive very little.

“Any of my friends that needed some help, I would make game plans for them,” said Villavicencio, now a junior at the University of New Hampshire and president of Latinx student group MOSAICO. “‘Here’s the process of how to get into college, and here are free ways to apply to college without paying for it.’”

Nashua high school’s practice of placing students in different academic levels based on  past performance is known as “leveling” or “tracking.” The idea is to better tailor instruction by grouping learners based on their ability, typically using test scores, teacher recommendations and other assessments. It’s a widely-used practice, around the state and the country.

But critics say the structure harms poor students, students of color, English language learners and other marginalized kids, often underrepresented in higher-level courses. And they argue it evaluates students on snapshot performance rather than potential, labeling some students as unlikely to succeed and even locking them out of future opportunities like college.

It’s spurring some districts — including a few in the Granite State — to reconsider the practice’s place in classrooms.

Tracking has long been a concern in the Manchester School District, which was cited by the U.S. Department of Education’s Office of Civil Rights in 2014 because of the small percentage of minority students enrolled in advanced classes there. In 2010-11, only nine of the district’s nearly 600 Hispanic or Latino students were enrolled in an AP course.

“It’s documented that this system of, I guess you’d call it educational potential or educational assessment, resulted in confining children in a way that denied them opportunities based on their being considered not having the potential to succeed,” said Manchester NAACP Vice President Woullard Lett. “And so we get into this vicious cycle of lowered expectations that are minimizing opportunities.”

From Lett’s perspective, Manchester has made “marginal” progress since the federal report was released six years ago. The Board of School Committee officially voted to de-level the schools in 2019, and that work is now underway, according to Assistant Superintendent Amy Allen.

As of fall 2021, the city’s middle schools no longer offer low-, medium- or high-level options for courses, she said, and there are no longer entry requirements for algebra classes and other optional higher learning opportunities. Some high schools have started to phase out their foundational classes — the lowest of the district’s four levels — and will fully implement de-leveling in the 2022-23 school year, she said.

The district will keep its AP options, she said, and is working on removing barriers to accessing them.

“What we’re trying to do actually is increase the number of advanced placement courses and dual enrollment courses, and supporting students to be able to encourage them that they can do these classes,” Allen said.

She acknowledged that efforts to increase enrollment of marginalized students are “slowly trickling.” In 2017-18, nearly 25 percent of AP students were nonwhite, compared to about 20 percent in 2013-14, according to federal data. In contrast, more than 40% of the student population was nonwhite in 2017-18, and about 35% of students were nonwhite in 2013-14. The district’s focus is now on building awareness of the opportunities. 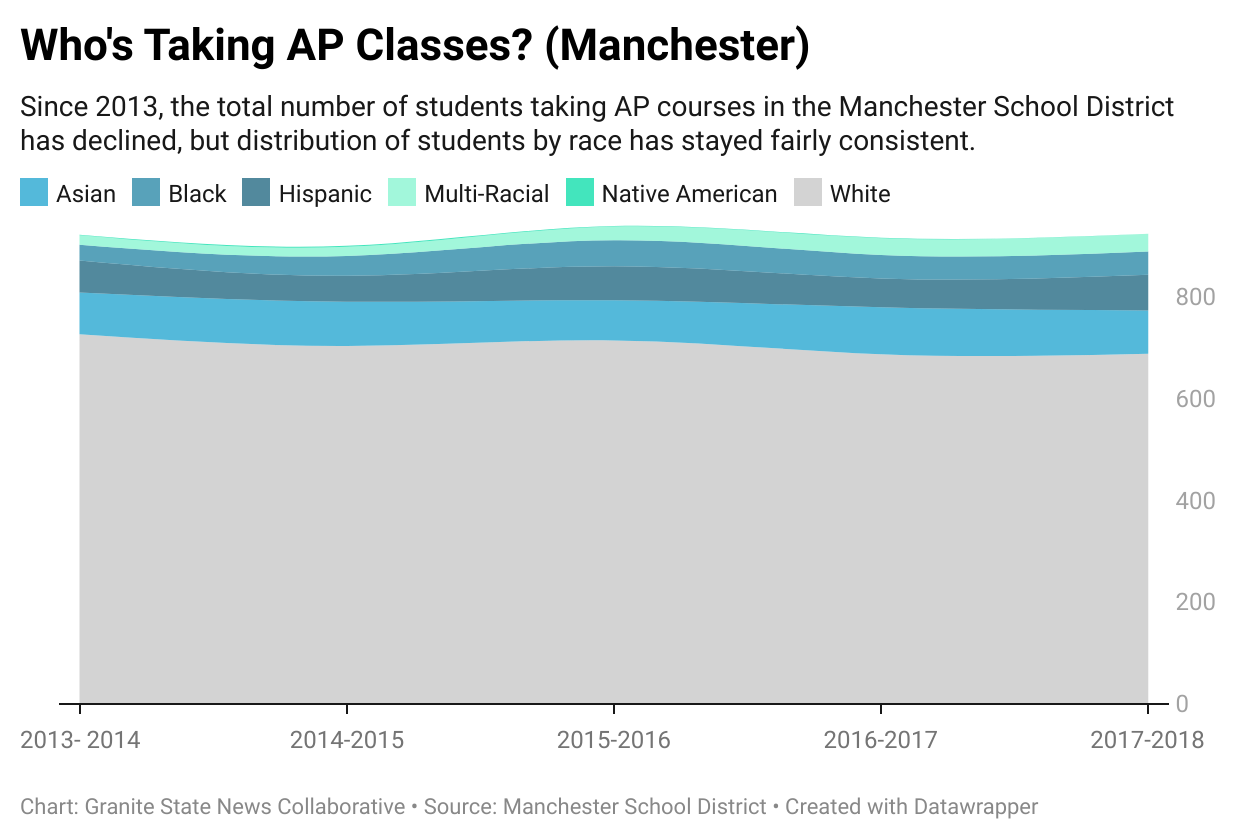 That starts with educating families. In a 2018 community survey conducted by the district, nearly half of Black parents, 41 percet of white parents and more than 40 percent of Hispanic and Latino parents said they weren’t aware of higher learning opportunities available to their children, according to Allen. More than 750 parents or caregivers responded to the survey.

The district also recently added student representatives to the school board and has worked closely with community group Manchester Proud to develop a plan for the district’s future.

“The pandemic really strengthened our relationships with our partners and opened our doors. It’s really become, we’re doing this work together,” Allen said. ” … We need their voice, we need their experience, their work.”

Federal data shows disparities in higher-level learning opportunities are not just present in Manchester. Of the 338 students who took at least one AP class at Nashua High School North in 2017-18, nearly 71 percent were white and about 14 percent were Asian, while almost 3 percent were Black and about 8 percent were Hispanic or Latino. 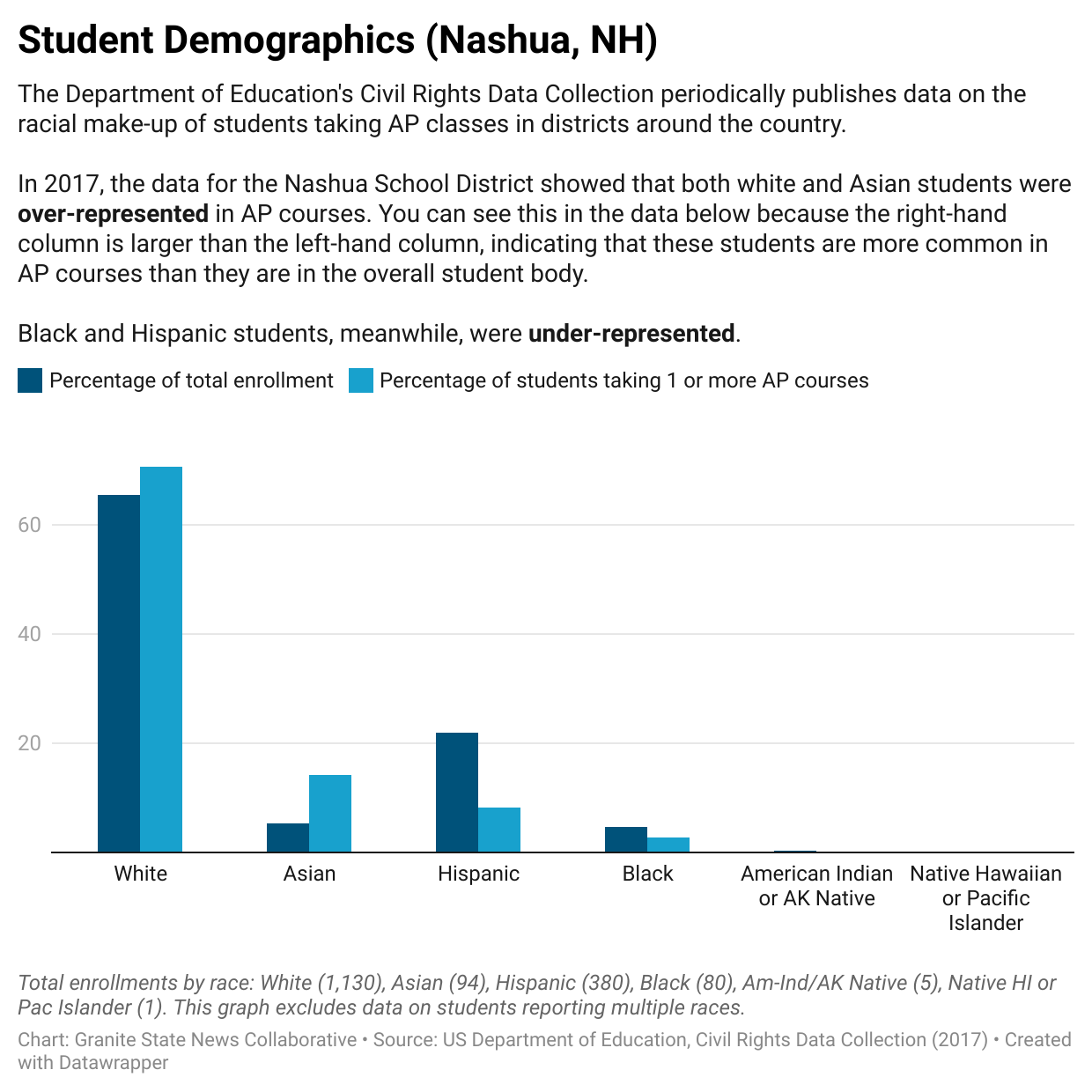 Administrators in the Nashua School District did not respond to requests for an interview.

According to Yasmiyn Irizarry, a sociologist and assistant professor at the University of Texas Austin, the way educators perceive students can play a significant role in creating disparities, especially if a recommendation is required to sign up for AP or honors courses. Her research shows that unconscious racial bias around student ability can appear as early as first grade. A 2016 study illustrated that Black students are referred to gifted programs at significantly lower rates when taught by teachers who are not Black.

“If teachers have unconscious bias, that bias is going to shape the extent to which they think a student is prepared for more advanced work,” she said.

At Woodbury Middle School in the Salem School District, these sorts of recommendations were once used to evaluate students for advanced math and foreign language classes, alongside previous grades and other school assessments.

But the school began shifting away from those requirements a couple of years ago, and now gives all students the option to take higher-level foreign language or math courses such as algebra, according to Tracy Collyer, assistant superintendent for academics and support.

And so far, learners seem to be rising to the challenge.

“The data has shown that students who may not have qualified under the old system do very well in the classes,” she said.

Salem High School still requires prerequisites for certain courses, however, and offers multiple levels, including foundational, intro, honors and AP. And data shows disparities still exist there, as well. In 2017-18, 88 percent of AP students in the district were white, while almost 7 percent were Asian and about 3 percent were Hispanic or Latino. Those groups made up 86 percent, 4 percent and 8 percent of the student body, respectively. 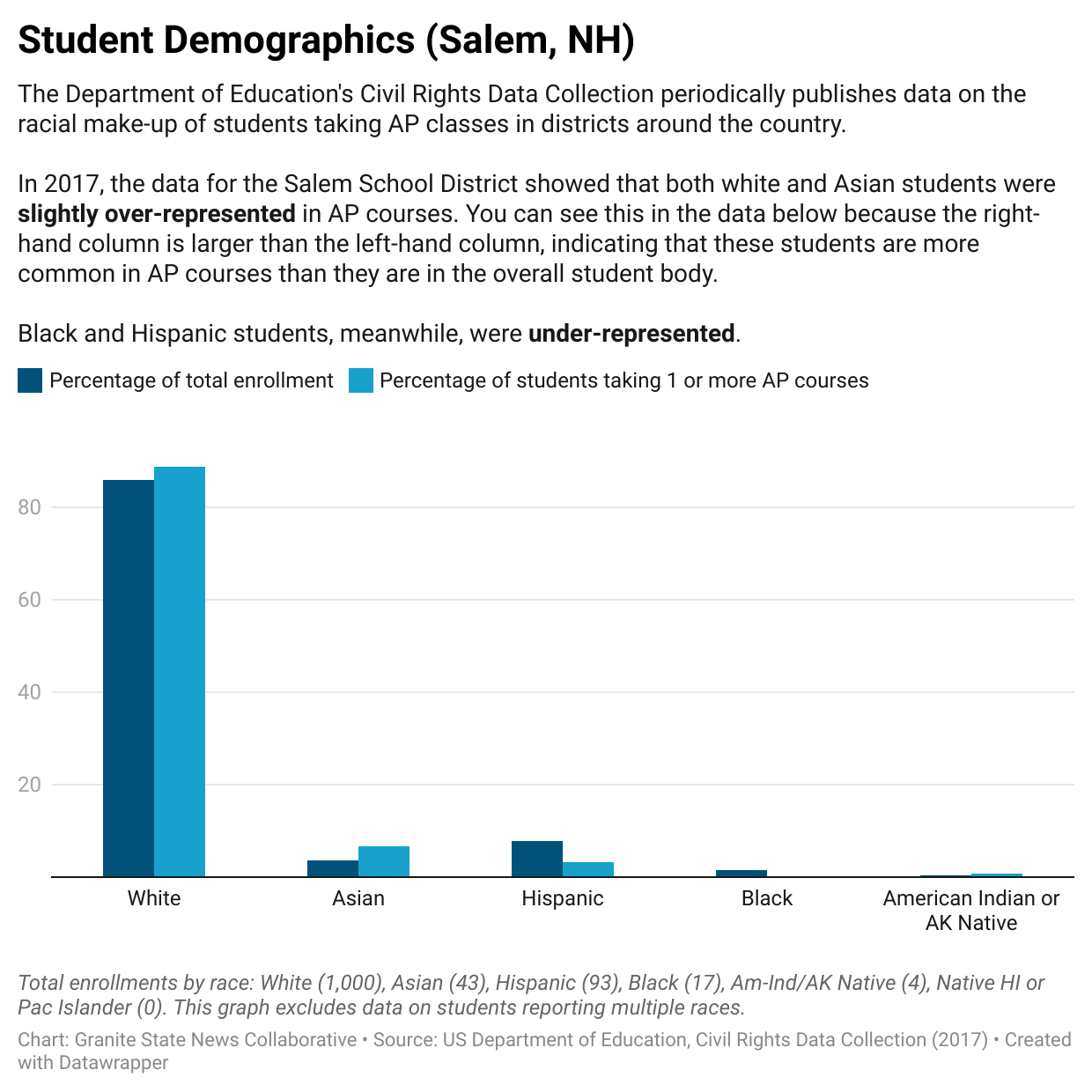 Collyer said the school rarely prohibits students who lack prerequisites from taking a higher level class if they express interest. Learners can take a foundational course in one subject and an honors course in another if they choose.

In practice, though, that’s often not the case for many students, according to Irizarry.

“Research suggests that even without having that structure, students still end up in classes that are connected. You don’t have a lot of students who are taking advanced math and remedial English,” Irizarry explained.

Ideally, she said, more rigorous education should be offered to all learners, which some studies have shown to reduce achievement gaps among different groups.

“We benefit more when we offer gifted education to students that are performing poorly than to those who are performing well,” she said. “But our system doesn’t work like that — our system sends all our resources to the high-performing students.”

Enrolling students of multiple levels in the same class is known as heterogeneous grouping, and it’s been in use at Oyster River High School in Durham for at least a decade, according to Superintendent James Morse.

Some courses, such as advanced writing and calculus, still require prerequisites at the high school. But for the most part, required classes aren’t sorted into levels or limited to students with certain averages.

For example, all freshmen take the same English class, and then choose between expository or journalistic writing as sophomores. In their final two years, students can choose from a wide range of writing and communication electives, such as linguistics, mythology, science fiction and college composition. And for AP classes, enrollment is open to anyone.

“I would rather have children be taking programming that maybe stretches them academically,” Morse said, “than sit back and be bored and twiddle their thumbs and kind of not push themselves.” 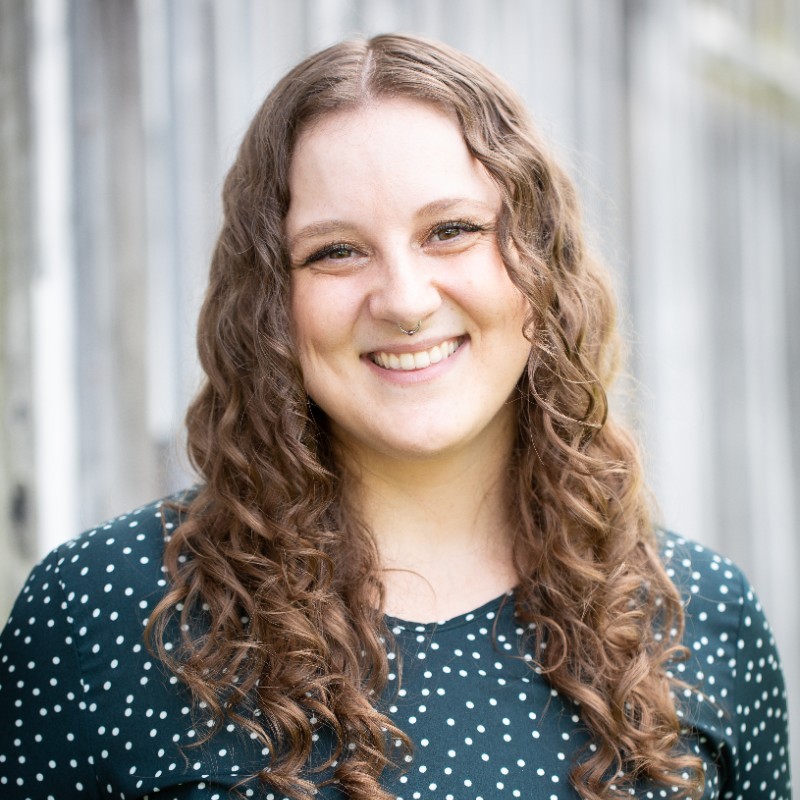