MANCHESTER, NH – Sunday’s 25th annual St. Patrick’s Parade was a long time coming. But after a two-year absence, organizers delivered one for the record books. With more than 150 listed participants in the line-up, the thousands who descended on the city for the parade and the preceding 2-mile Shamrock Shuffle race by Millennium Running were treated to a spectacle that included marching bands, pipes and drums, tumblers, dancers, twirlers, fire engines, clowns, pageant queens and tiny cars and trucks.

Mike Ciampa made the trek from Seabrook to be part of the celebration, a nod to his own Irish heritage. 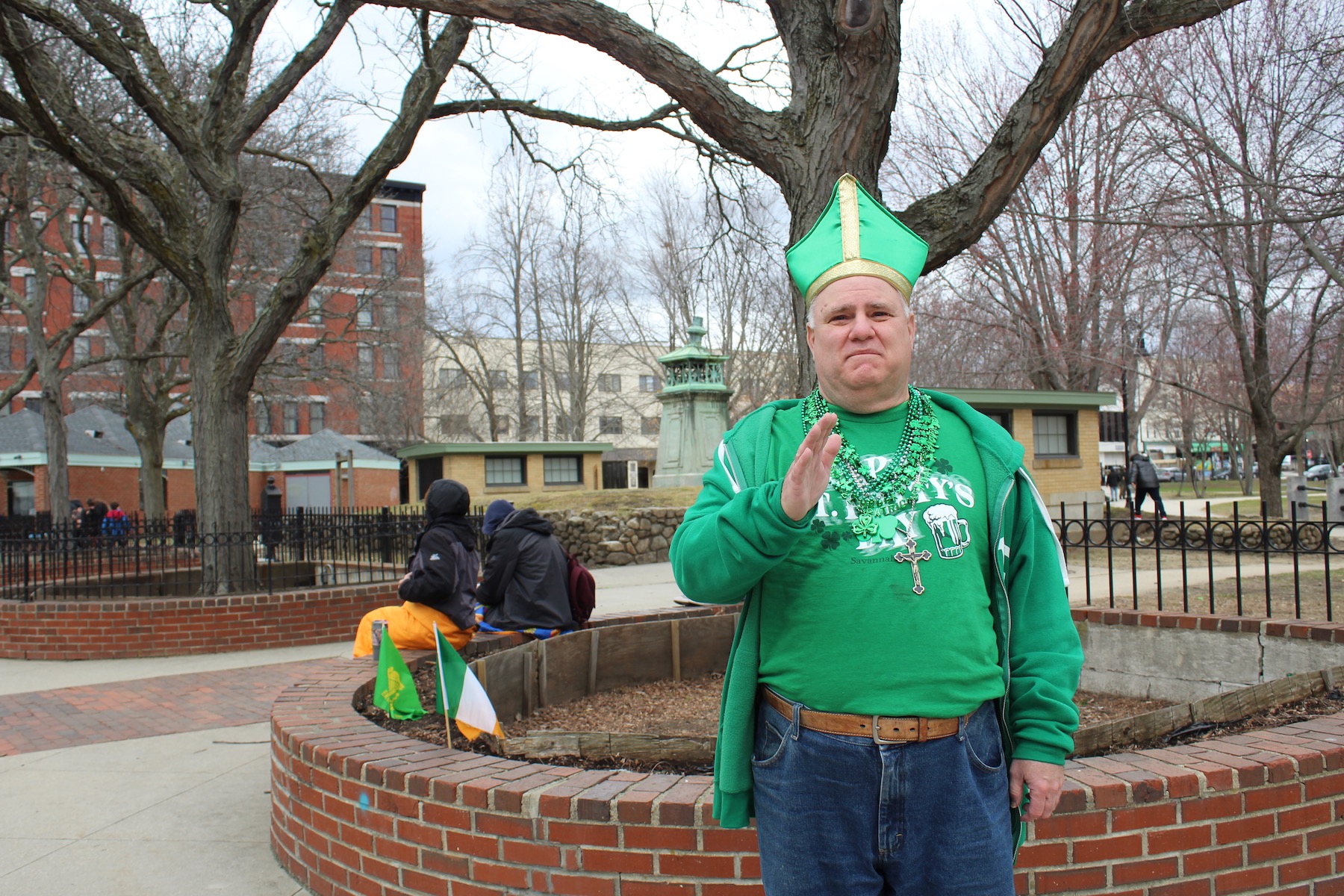 “I’m Irish, Scottish and Italian, actually,” he said, although his outfit was top-to-toe 100 percent parade ready. “The hat is because St. Patrick was a bishop,” he said, adjusting his green-and-gold cap and lifting his hand as if in blessing mode. “This is my first time in Manchester since COVID,” Ciampa said. He was going to stick around for some post-parade festivities at one of the many downtown pubs and eateries already overflowing with revelers.

Families arrived early to claim a prime viewing spot, including Penny Demos of Hampton, her daughters, Kathryn King of Bedford and Sarah Lescault of Manchester, and their families.

“It was fantastic. The parade was the best-ever. And the tribute to the Ukraine was important and beautiful,” said Brandon King, Demos’ son-in-law.

His wife agreed with that assessment, saying that the family knows its parades – they’ve been attending Manchester’s annual event for years, and arrive 30-45 minutes early to stake their claim.

“This is our spot. We meet here every year,” said Kathryn, standing in front of the Citizens Bank across from Pappy’s Pizza. Her grandson, Reilly King, was in animated over-drive recalling all his favorite moments from the parade.

“After the Veterans Day Parade he went home and had his own parade, walking up and down the street for hours with his pop-gun,” said Demos, flashing a grandmotherly smile full of pride. 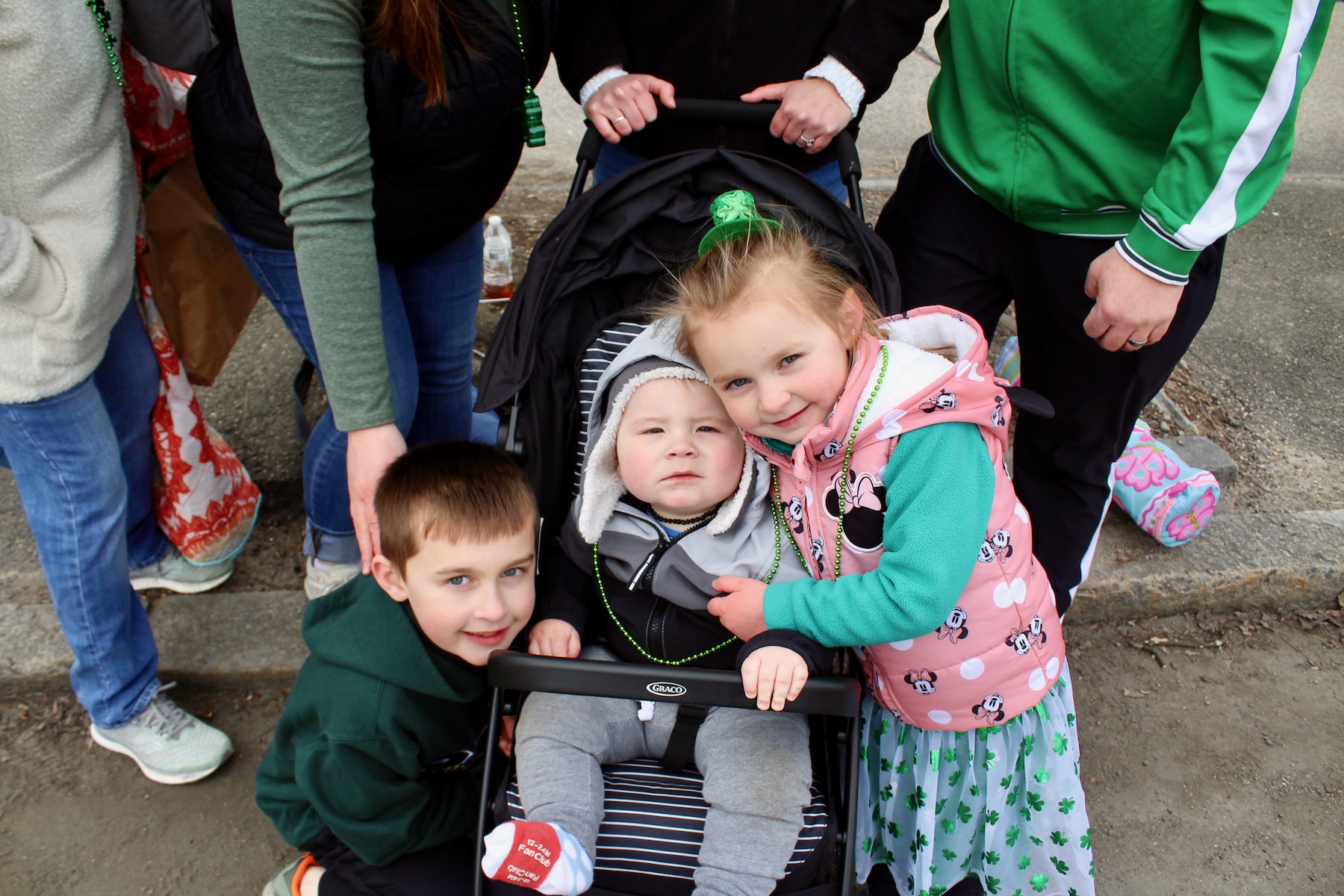 Among those who had come to perform in the parade were Alexandra Albano-Fontaine, 16, a member of Gym Dandies Children’s Circus of Scarborough, Maine. She was one of several unicycle riders who wowed the crowd. As they headed back to their car after the parade they were stopped by David Dye, who had a question.

“We were wondering how you got up on the unicycle,” he said. Alexandra, with an assist from her parents, demonstrated the multi-step process that allows riders to mount a five-foot unicycle, which involves some hand-holding, stomach balancing and moxie.

Dye and his family, of Stratham, said they particularly enjoyed the marching bands and Shriner’s small cars. They were handing out “good news” leaflets – including one about dog trivia and training to those who had dogs in tow (there were many) as a way of spreading God’s love.

Lou Daniels, who works for the city Highway Department, was parked at Bridge Street as the crowds cleared, waiting for the high sign to retrieve all the barrels he’d set in place to block access to Elm Street so that the parade could proceed safely.

The weather was on the chilly side and there were a few intermittent raindrops, but overall, parade day was a perfect celebration for a city that has been missing the sense of community that comes from such events.

Stephanie McLaughlin was the parade’s Grand Marshal – a gratifying role that was delayed due to COVID which preempted her scheduled reign. But the return to normalcy was a welcome one for attendees and participants alike.

There were marchers whose tribute to Ukraine was solemn and timely featuring a large contingency of supporters working together to display a large horizontal banner in the colors of the Ukrainian flag in honor of those who have been killed and displaced by the invasion of Ukraine by Russia. 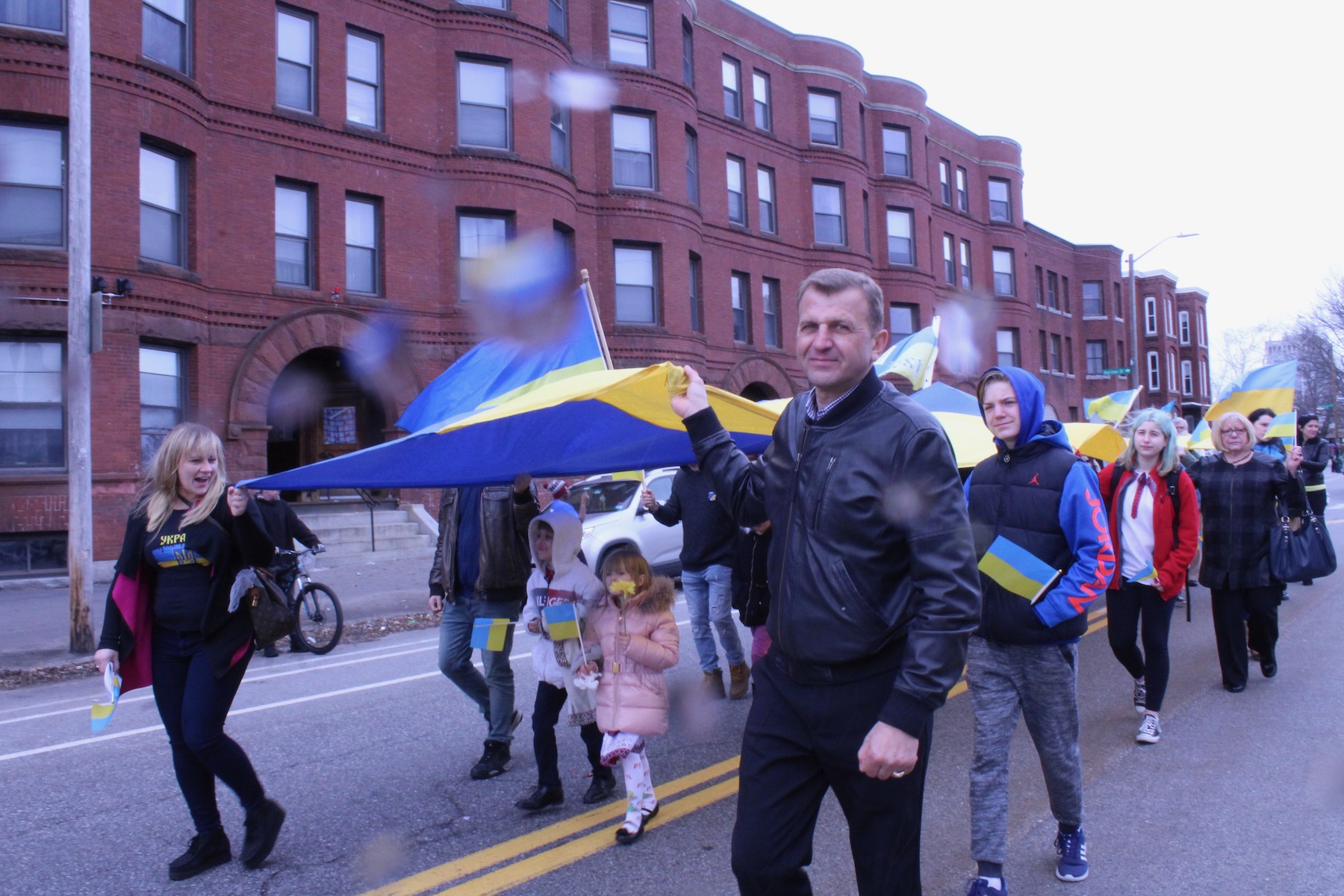 As the crowd dispersed Scott McQuillen, in his proper Ancient Order of Hibernians suit jacket and tie, and Santo Gae, in his laid-back American flag sweatsuit ensemble, had a moment on the sidewalk in front of Veterans Park. McQuillen ended up explaining the origin of Notre Dame’s Fighting Irish to Gae, who came to Manchester in 2003 from South Sudan.

“The KKK was coming into town for a rally and the football team said ‘bleep that.’ They were Catholic/Irish and the KKK hated them, too. The football team beat the crap out of them at the train station and ran them out of town. The next day they reported that the Notre Dame ‘fighting Irish’ beat the Klan,” McQuillen said.

Gae told McQuillen that his family came to the U.S. as immigrants and are proud to be Americans.

“My family, too,” McQuillen said.

“Love is love, once you feel it from your heart,” Gae said, as the men parted with a hug and a handshake.

Marty Quirk, who shared MC duties with Kathy Staub, was fully booked for a day of Irish pride – after the parade he was due at the Shaskeen for his regular Sunday 2-5 p.m. performance of traditional Irish music. As he dashed down Elm Street toward the pub, he took a moment to reflect on the day’s events.

“It’s great to have it back after this COVID coma,” Quirk said. “I like that it’s a family day. St. Patrick’s Day can be a little wild, but this reminds me of how it’s celebrated in Ireland. And financially, it’s a great boon to the city. It’s like we get a second St. Patrick’s Day out of it – it’s not over ’til we say it’s over.”

All of the city high schools were in fine form and represented with marching bands, and in addition, bands from Bedford, Bishop Guertin and Londonderry High School also marched. A full list of parade participants can be found here.

The 2022 parade was supported by the City of Manchester and a number of local sponsors, listed here.