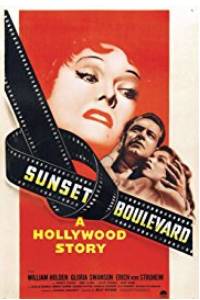 Billy Wilder’s “Sunset Boulevard” is a movie about old Hollywood and its notorious underbelly. This month we take our departure from sunny, splashy musicals into black-and-white film. After years of being attracted to the candy box packaging of technicolor, I finally decided to delve into the visually stunning world of black and white. Because of its unavoidable references in the classic film world, I chose my first movie, “Sunset Boulevard” from 1950, starring Gloria Swanson, William Holden and Eric Von Stroheim.

⇒BREAKING CLASSIC FILM NEWS! Just after this piece was published, I discovered that Turner Classic Movies is sponsoring a “Sunset Boulevard” revival event over two days, May 13 and 16 – AND there are several showings in the Greater Manchester area. Scroll down to the bottom for more on that!

Norma Desmond, (Gloria Swanson) plays a has-been silent movie star, unable to let go of her past, slowly spiraling into a  maddening  world of her own creation. Convinced she can make a triumphant come back, she coaxes the young handsome opportunistic Joe Gillis (William Holden)  to edit her self-written script with the aim of returning to film and of making him her kept lover.

Norma’s Butler, Max Von Mayerling (Eric Von Stroheim) perpetuates her world by mailing false fan letters feeding the illusion. Joe, desperate for money essentially agrees to Norma’s unspoken proposal but is restless from the start. Norma eventually becomes increasingly maddened with her obsessive ideas of a triumphant return to the screen as well as becoming jealous of Joe’s unavailability, leading to his demise.

Much like the “Wizard Of Oz,” each character in Sunset Boulevard is unreplaceable, performed by actors who somewhat paralleled their characters in everyday life. Gloria Swanson, a beautiful, true-life top box office, empowered, silent movie siren in her day, partly attributes her rise to fame through films directed by the great Cecil B. Demille, who also makes an appearance in this film, endearingly addressing her by his real-life nickname for her, “young fella.” In the 1919 film “Male and Female,” directed by DeMille, the 20-year-old Gloria Swanson is face down with a live lion on her back. By the time “Sunset Boulevard” is filmed, the silent movie industry had fallen out of favor for almost 20 years and Gloria was far from the public eye.

William Holden also was away from the big screen for almost 10 years upon making the film, and Eric Von Stroheim, an actual director during the silent movie era – and who worked with Gloria Swanson, directing her last movie, “Queen Kelly” (which is actually the silent film she and Joe watch together) – parallels Von Stroheim’s real-life past.

This is my first black-and-white film, and within 15 minutes of viewing, the need for color was slowly fading. Once the camera enters Norma Desmond’s room, color becomes unnecessary. We finally meet Norma Desmond in all her lavish opulence. Billy fills the screen with grandiose interiors, excessive in nature as a reflection of the main character. She communicates with an air of exaggeration as she pulls her repertoire from her silent era convinced of the need to overly act as a means of conveying emotion.

Noir in its portrayal, Billy Wilder is never without humor. Pay attention to Joe’s intelligent one-liners and amusing double takes.

Edith Head, per usual, executes perfection with the wardrobe in this film, styling Norma Desmond in a way that shows her exquisite warped fashion sense.

“Sunset Boulevard” is a movie for people who love the art of movie making. Paramount studios are used as a backdrop, as Billy takes us into the real-life soundstage of Cecil B. Demille’s “Samson and Delilah.”

Billy Wilder chose a significant amount of real location sites in Hollywood during filming. Joe’s apartment is real. Paramount is Paramount. Schwabs is Schwabs. One of my favorite scenes is when Betty Schafer (Nancy Olson) – the one beam of honest sunlight in the film – and Joe take a walk in the evening through the backlot streets of Paramount, where you can see painters preparing a backdrop for the following day’s filming. (At least that’s my story.) The exterior of the mansion used in Sunset Boulevard is real, however the interior of the mansions are sets, once again, confirming classic film production detailed craftsmanship.

Nine of the most infamous words in cinema, spoken by one of the most infamous characters. In the end, Norma receives in a strangely demented and convoluted way, exactly what she wants. Had it not been for the reveal at the beginning of the movie … the ending could have come off as a slight shock. Norma descends into complete madness and Max, her ever faithful servant, indulges her illusion one last time in a sense of duty. As she creepily walks toward the camera, we feel pity for her, too, because we understand she is reaching for something that seems unattainable.

The irony of the film is Gloria Swanson, age 51 at the time, playing a forgotten, older actress gives an unforgettable, iconic performance, still riveting to this day, proving the foundation of the story essentially false, and if you look past the oddity of her character, you can still see that beguiling, glamorous, young silent film star, yearning for one last chance.

“Sunset Boulevard” is an indispensable classic film full of drama, opulent sets, and quotable dialogue. Nearly 70 years after its release, it remains a “Paramount” film.

As promised: Here’s the scoop on where you can get the big screen experience of the amazing classic movie, “Sunset Boulevard”