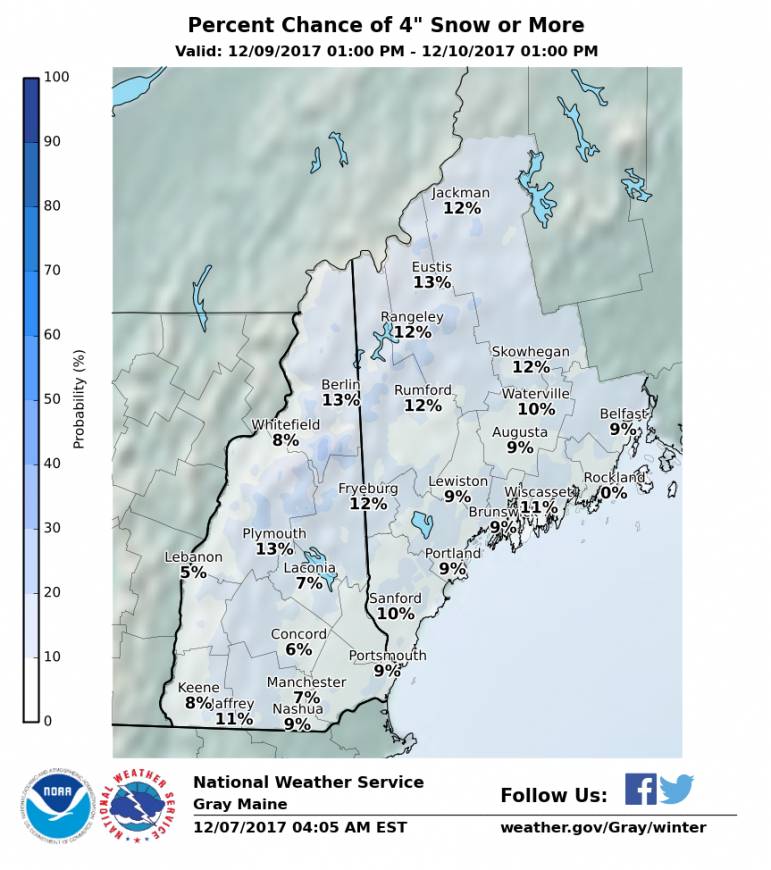 MANCHESTER, NH – Looks like snow is in the Saturday forecast. National Weather Service meteorologist Tom Hawley says the estimate for Manchester is between 2 and 4 inches, with even more on the radar for Tuesday, with the probability of up to 8 inches.

And thanks to a new feature on the NWS site, you can follow along and play the game of odds – yes, it’s still a bit of a guessing game, but who doesn’t love a good data chart?

For this snow season, the Weather Service has added an interactive Snow Amount Potential  chart. You can see what the probability is of snow in your area – or anywhere else – by how much snow will probably fall.

If nothing else, it’s an entertaining way to guesstimate what’s in store, says Hawley.

“We normally say something like ‘expect 1 to 3 inches’ for an event like Saturday’s. The chart gives you what our probability of snow is within a certain range, and it’s updated regularly,” Hawley says.

Saturday’s snow will likely start in southern New Hanpshire early- to mid-afternoon, and be over with by sunrise Sunday morning, Hawley says.

“It will be a light snow, nothing crippling,” he says. Just a lovely taste of winter as the holiday season sinks in.

As of now, Tuesday’s precipitation forecast looks like an all-day snow event that could bring another half-foot of snow, or more.

You can click here to play around with the National Weather Service’s new feature.