MANCHESTER, NH — Saturday was a big day for Jose and Angela Mojica, a day they have dreamed about — twice: the launch of Dulces Bakery.

The second time around for the bakery has all the ingredients for success — a location on Chestnut Street in the middle of the city’s arts renaissance district, just around the block from Elm Street, with landlords who are rooting for them.

And they’ve cornered the market on authentic cakes, cookies and sweet treats featuring the flavors of Jose and Angela’s respective cultures — Puerto Rico and Colombia, adding to the growing list of places where foodies in the MHT can tickle their international taste buds.

Dulces is Spanish for “sweets.”

They are known for their tres leches cakes, a rich and flavorful dessert which Angela layers into to-go cups. She makes 27 flavors, including her award-winning triple chocolate, which clinched the 2016 annual Caregivers Chocolate Lovers Fantasy prize.

After successfully opening Dulces Bakery on the city’s West Side  in 2015, the Mojica’s faced a few challenges, most notably their landlord decided on a new use for his building, forcing them to vacate.

Although the Mojicas had pretty much put everything on the line for their first bakery, the experience confirmed what they knew all along: a family-run bakery featuring Spanish specialties is a good fit for Manchester, and they had the passion to do it.

So they took everything they learned from their first bakery experience, and then they focused on finding a new location. They put the word out to friends and family that they were going to make a come back. They posted regular updates on their Facebook page. They prayed hard, worked hard, saved every available penny.

And they never gave up dreaming.

Saturday’s grand re-opening was the intersection of persistence and faith. The event was attended by Mayor Joyce Craig, who worked up an appetite cutting the ribbon and appeared to be having trouble deciding which cookies to purchase — nothing beats a sugar high on Christmas parade day, so you could say that it was her duty to fuel up on sweets.

After a tour of the kitchen, and a long pause in front of the cookie case, the mayor was spotted leaving Dulces with a weighty bag.

Rod Jackson was one of the first customers, there with his granddaughters, Emily, 5, and Lydia, 7.

“We didn’t know anything about this bakery until Lydia told us last week. She’s our little informant,” Jackson said. He explained that Lydia is a classmate of Jose Mojica Jr. at McDonough Elementary.

“It’s a great addition to the neighborhood,” Jackson said.

Angela Mojica’s mom, Florencia Torres, was there for the occasion as well. She said she was proud of her daughter’s accomplishments as a baker.

“She’s been baking her whole life – and she doesn’t get it from me,” Torres said, adjusting the special occasion chef hat secured on the head of her Pomeranian pooch, Benji. “I don’t like cooking.”

Helping out inside the bakery on Saturday were Tahera and Alister Daniel of Derry, longtime friends of the Mojicas.

Tahera Daniel met Jose Mojica when they were co-workers at Jet Blue, and the couples have remained friends over the years.

“We’ve watched them for the past year-and-a-half working for this. We wanted to be here to support them,” Alister Daniel said. 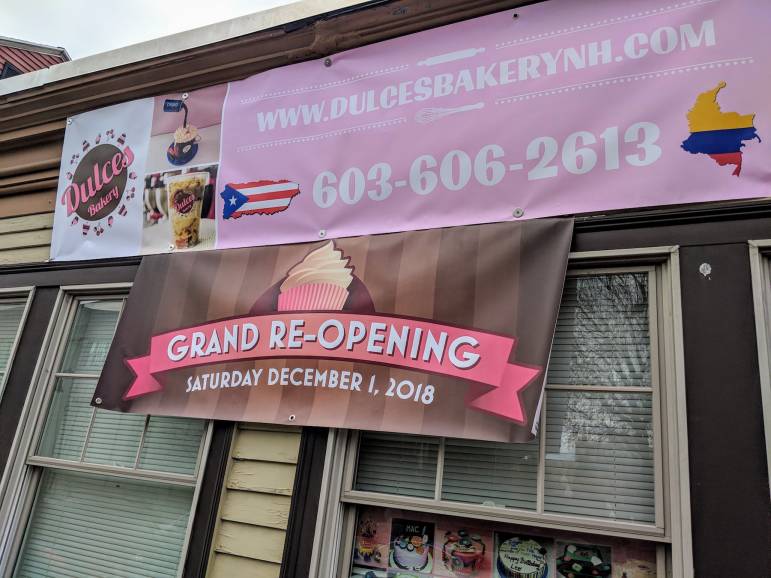 Along with grab-and-go confections, Angela Mojica specializes in custom cakes, made to order. They also feature some savory selections as well, including empanadas. Jose Mojica says although the new location is small,  God willing there’s room to grow — the former Post Office Fruit Luncheonette is the adjacent building, which happens to be for sale.

“We’d love to take it on and expand our menu to include Spanish food as well as cakes and desserts,” Mojica said. “We’ll see what happens.”

For right now, they say they feel blessed to be back where they belong.