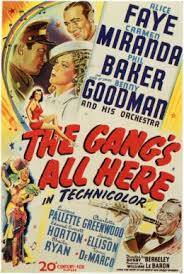 This month we depart from black-and-white films, back to the explosive Technicolor genre entering with a picture produced by Busby Berkeley best known for his black-and-white kaleidoscopic overhead shots, elaborate formations, and over-the-top fantasy sets using beautiful women as his instrument. Berkeley’s innovative camera work is still reflected today in resurgence, in films and TV shows, such as the live action version of Beauty and the Beast and Dancing With the Stars. Known as a camp classic, the 1943 production of 20th Century Fox motion picture The Gang’s All Here, was mainly a vehicle to showcase the hottest starlet of the day, Carmen Miranda.

The evening prior to his World War II departure, Andy Mason (James Ellison) falls in love with Eadie (Alice Faye) an all-American blue-eyed showgirl. However, Andy conveniently omits to inform Eadie that he is already engaged to a long-time friend of the family. Upon returning from the war, a decorated hero, Andy’s father decides to  throw the ultimate bash in welcoming his son home, inviting Eadie and her dance troupe to perform, where Andy’s fiancee is also attending, placing him in a difficult predicament.

Within the first few minutes of the opening scene, we are introduced to the beguiling Brazilian bombshell, Carmen Miranda, who plays Dorita in the film and, although we have yet to meet the other female cast members, already it is evident that Miranda is the “one” to watch.  Regardless of others’ presence it is clear, Miranda’s free-spirited exoticism, expressive eyes, dazzling smile, impeccably fluid samba hips and elaborate “fruit filled” head pieces, makes one want to control the camera and keep it directly on her.  Even without her delightfully exaggerated  costuming, Miranda’s exuberant spirit would have no choice but to explode through the screen. No other individual exists when Miranda is performing. She captures the camera and you simply cannot take your eyes off of her. Although she appeared in black-and-white film towards the end of her career, Technicolor may have been created in the wake of her imminent  arrival.

Maria do Carmo Miranda da Cunha aka Carmen Miranda, born in Portugal, Miranda moved to Brazil at a very young age.  After establishing herself in Rio De Janerio, becoming the highest-paid entertainer at the age of 27, Miranda went on to skyrocketing stardom in America during the 1940s in a plethora of  propaganda films, full of romanticized exotic locals were released, during its Good Neighbor Policy, attempting to sway South America into alignment. Propaganda films, generally used to promote political causes, were vehicles where messages were interwoven into the script, subtlety dictating the manor in which Americans should view their fighting soldiers and declare their allegiance to their country.

Miranda’s colorful costumes were a tribute to the Afro-Brazilian women called Bahia of Biana where the Samba was born.  Although sets were fictionalized, they were also dripping with tropical-inspired imagination and fantasy. Average Americans unfamiliar with South American culture were captivated by her exoticism and subsequently she became  the highest paid female entertainer in America during 1945. Upon signing the contract to perform in America, Miranda was insistent that her original ensemble accompany her to Hollywood as she was rightfully convinced no American musician could properly capture the true rhythm of the Samba

Approximately 20 minutes into the film, the scene of which Miranda is most famous for, Busby Berkeley’s production of the colorful, “The Lady with the Tutti Frutti Hat,” is rumored to be the inspiration in using Miranda’s likeness for the Chiquita Banana model.  Berkley’s imaginative sets and his signature sexual innuendo accented by gigantic bananas caused controversy with censors and was subsequently banned in Brazil. Miranda’s captivating performances, comedic timing and method in which she adorably  butchered American slang phrases won her audience over with ease.

A bevy of beauties lay on an island and awaken to greet Miranda, approaching in an oxen-drawn carriage full to the brim with bananas, as she performs with her characteristic wild-eyed smile. Giant bananas are used as props in Berkley’s signature patterned formations.

Faye performs the song “No Love, No Nothing,”  promising her undying devotion to her male counterpart, yet in an earlier scene she excuses soldiers for their infidelity, solidifying the Hollywood “double standard” expected to be readily accepted by girlfriends and wives alike, a theme that subtly plays throughout many films.

Alice Faye’s smooth vocals and  deep dreamy blue eyes, allowed her to become the No. 1 box office drawer in 1941. Faye began as a lead singer with the Rudy Vallee orchestra at the tender age of 15. When the female lead walked out of a Hollywood production Alice replaced her and garnered a seven-year contract with Fox studios.

After the end of WW II, Miranda’s character fell out of favor as Americans were ready to leave the memories of troubled times behind and look forward to new horizons.  Miranda continued to work in roles with lesser production values and guest appearances on television.  Her indelible personality was silenced at the young age of 46 when, after appearing on the Jimmy Durante show, she fell to one knee from exhaustion.

She spent the evening entertaining friends and family in her home, until the wee hours of the morning. When she retired to her bedroom she collapsed of a heart attack, the result of prescription medications supplied by the studio, alcoholism, and above all, a broken heart unable to attain the love or family she truly desired. Although her life was cut short, she still remains an icon, parodied, respected and loved the world over.