Coronavirus disease (COVID-19) has impacted nearly every facet of life in New Hampshire, and the September 8 state primary and November 3 general election are no exception. Due to the pandemic, temporary changes to state law have been made to allow New Hampshire residents to complete one form to request an absentee ballot for the upcoming elections. This allows voters to cast their ballots without COVID-19 concerns standing in their way.

Now, city and town clerks are experiencing a steady increase in the number of absentee ballot requests coming in. Manchester City Clerk Matthew Normand said as of the last week of July that his office was at around 1,100 requests to date for the upcoming primary, which he notes is significantly higher than what was seen from the 2016 September primary when there were about 892 total requests that came in.

“It’s a tremendous amount of absentees coming into the office,” Normand said.

During the 2016 primary, Normand said the city saw 834 total absentee ballots cast. The primary is over a month away and that number has already been surpassed.

“We’re going to pass all of those benchmarks that we’ve done in the past just because of the pandemic,” Normand said.

The clerk’s office has now brought aboard two local election officials who are volunteering to help with the increased number of absentees. These individuals work on election day but started assisting this week to give the office a hand processing the absentees.

Additionally, Normand said the city will definitely need help on election day at the polls in November. Training and a stipend is provided to work on election day and Normand added that if people want to try it out in September when there is a slightly lower turnout, that it is a good opportunity to work an election and volunteer in the community. Those interested in doing so can call or email the office at (603) 624-6455 and cityclerk@manchesternh.gov.

Manchester is not alone in surpassing previous benchmarks for the amount of absentees as Bedford is also experiencing an influx. Town Clerk Sally Kellar said that right now the town is receiving 40-50 requests a day with most people requesting both ballots. She said that these requests are coming in hourly.

“For a September primary this is the most we’ve ever received,” Kellar said.

“So far my deputy town clerk and I are trying to stay one step ahead,” Kellar said. “We may need to get some extra help.”

Make no mistake: the election will happen in New Hampshire on November 3rd. End of story. Our voting system in NH is secure, safe, and reliable. We have done it right 100% of the time for 100 years – this year will be no different.

“Today we have received close to 1,000 requests for the state primary, approximately 1,500 for the general election, and are receiving close to 100 requests daily,” Lovering stated via email last week.

Lovering said the city is encouraging all residents to vote absentee during the pandemic. The city also asks residents to request their absentee ballot at their earliest convenience and to return their completed ballot as quickly as possible.

“We have already surpassed the number of requests received for the 2016 State Primary, and anticipate an abundance of our voters will vote  absentee during the COVID-19 pandemic,” Lovering stated.

Moreover, voting in the upcoming presidential election made the national news cycle recently when President Donald Trump took to Twitter to float the idea of delaying the November 3 election. Trump’s tweet caught the attention of Gov. Chris Sununu who on July 30 tweeted, “Make no mistake: the election will happen in New Hampshire on November 3rd.  End of story. Our voting system in NH is secure, safe, and reliable. We have done it right 100% of the time for 100 years – this year will be no different.” 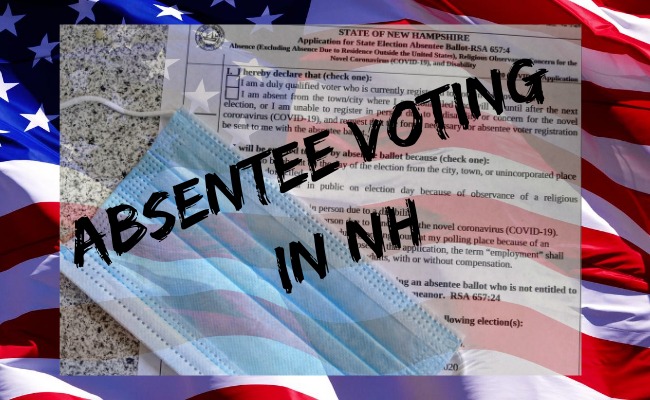 7 Steps to vote absentee in NH