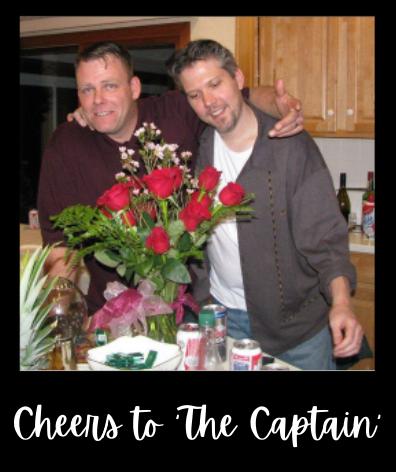 You probably don’t know The Captain—not The Captain I know. But you have your own Captain; there’s a Captain in everyone’s life.

The Captain I know passed away on Sunday morning at age 48 after battling pancreatic cancer. He fought valiantly, but let’s be real: cancer is a motherfucker, and pancreatic is one of the worst. The Captain was my first cousin Jaime’s husband and my good friend, and I already miss him.

So instead of some plaintive piece where I try to canonize a man who—much like me—was strapped to his own vices, I’m going to propose something that I hope will stick and maybe this could be part of The Captain’s legacy.

You see, I’m going to propose a toast, a toast to family and friends and conviviality, a toast to The Captain.

But first, perhaps, some backstory is in order.

The Captain’s name was Bill. He was Bill long before he was The Captain. The moniker was born at my cousin Kerri’s wedding reception while Bill was still dating Jaime[1].

Bill imbibed in a few too many—as he was wont to do[2]—and he needed a little siesta before dinner in their hotel room a few floors up from the banquet hall in Portsmouth, N.H., where the reception was held. After dinner and dancing, the obligatory “Electric Slide” and “Cotton-Eyed Joe” and slow songs by Journey, my family gathered for a group photo.

Oddly, inexplicably, mysteriously, beautifully—Bill rose like Lazarus from the deep sleep of the inebriated to appear for the photo. Someone in my family—I can’t be sure whom, seeing I had consumed a few Shirley Temple’s myself—asked Bill how he made it back after being passed out.

Bill’s answer was succinct. “You can’t have a team picture without The Captain,” he said.

Thus, the nickname was born.

But the toast I’m about to propose—which I hope some of you might consider using in his memory[3]—occurred years later at a bar in my hometown of West Warwick, R.I., where a bunch of my family were out having drinks and sharing a table.

Normally a garrulous group, a lull in the conversation occurred. Never one to navigate silence, The Captain stood and raised his beer. Impetuously, drunkenly, boisterously, beautifully—The Captain screamed, “Cheers to me.”

Those of us at the table were caught off-guard, slightly disoriented, by his toast, unsure if we actually heard The Captain toast The Captain. And The Captain stood there grinning, his glass heaved to the heavens. Then I raised my glass. “Cheers to The Captain,” I said.

Instead I’m going to raise my glass and say, “Cheers to The Captain.” And I propose that everyone use this toast as well—to my Captain, to your own Captain, to Captains everywhere.

And maybe the next time you’re snagged in an awkward pause in conversation while out with people you love and appreciate, you’ll remember to raise your glass and say, in randomness that defines each of our days here on earth: “Cheers to The Captain!”

Everyone might be looking at you strangely, but keep that glass heaved to the heavens.

And maybe somewhere The Captain is toasting us, too.

[1] I fully acknowledge that our memories are unreliable, and I was intoxicated. The story I’m about to relay has evolved into family myth, and it’s quite possible that other members of my family remember something quite different.

[2] Each year, my family would have a contest on Thanksgiving Day where the drunkest person had the dubious distinction of being named The Thanksgiving Asshole. The Captain was the Willie Mays of this contest, one of the all-time greats. The other is currently typing.

[3] Alcohol is not necessary for a toast, just a full heart.