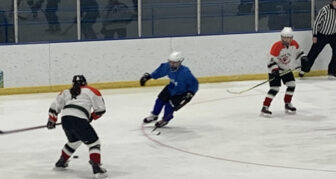 MANCHESTER, NH — Two games into its first season as a varsity program, the Salem High girls hockey team has been experiencing quite a few “firsts”.

The Blue Devils notched their first win in their first game, last week against Souhegan (5-0). Wednesday at the JFK Coliseum, Salem played its first road game, as well as its first overtime game and when sophomore Gracie Hoover completed her hat trick, the Blue Devils had their first OT win, 3-2, over Central-Memorial.

Hoover scooped up a loose puck in her own zone, raced down the left side, cut across the attack zone and snapped off a wrist shot that beat C-M goalie Chloe Gilroy, 5:30 into the extra session.

Hoover and her sister, senior Faith Hoover, were the driving forces behind Salem High starting a girls’ hockey program. Last year, it operated as a club program and this year it will play an abbreviated 10-game schedule and won’t be eligible for the tournament. Still, the Blue Devils have shown, at least through two games, they are ready to compete on the varsity level.

Central-Memorial (2-6-0) was playing without two of its top offensive threats. Senior Coriann Hoag was unavailable and freshman Ryleigh McNelly is sidelined due to a concussion. Despite being shorthanded, C-M battled hard and came from behind twice to force the overtime.

Central-Memorial Coach Cassidy Lavigne declined to comment after the game.

Gracie Hoover put Salem on top with an unassisted goal late in the first period with a bit of luck. The defenseman swooped around the back of C-M net and looked to center the puck. Instead, it deflected off a C-M player and into the net.

Central-Memorial knotted the score at 4:10 of the second period. Junior Neveah Marineau made a strong rush down the left boards, cut across into the right circle an ripped a shot past Salem’s Ronnie Keays. Sage Nicolay and Emily Bisson got the assists. 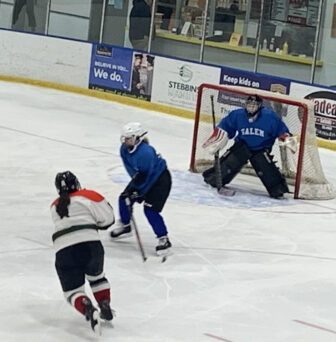 Salem had chances to retake the lead ,later in the period, only to be stymied by Gilroy. The junior netminder finished with 27 saves, including back-to-back stops on Grace Driscoll and Meg O’Callaghan with just over three minutes to play in the period.

Salem retook the lead just 21 seconds into the third period, as Hoover netted her second of the game.

Central-Memorial would answer quickly, courtesy of the lightning quick hands of center Jamie Webster. The junior has faceoff skills that would make Patrice Bergeron envious. When in the left faceoff circle of the attack zone, the lefty looks to snap off a shot on net just as the puck hits the ice. Three times previously in the game, Webster timed the faceoff perfectly to put shots on net, each time turned aside by Keays (16 saves). The fourth try, at 3:22 of the third period, proved to be the charm. Webster’s shot slipped past Keays to the glove side to tie the game, 2-2.

Both teams had chances over the final 10 minutes of regulation but Keays and Gilroy took turns making clutch saves. 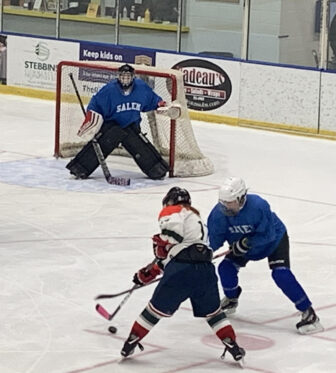