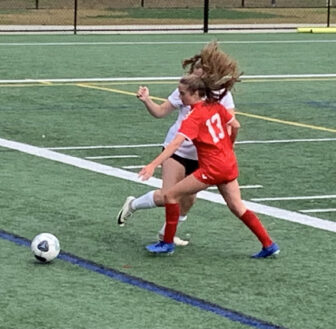 MANCHESTER, NH — It’s called an “Olimpico” and it is, perhaps, the rarest of soccer goals.

Megan Rapinioe did it at the 2012 London Olympic Games and again at the 2021 Tokyo Olympics. French legend Thierry Henry did it once, in 2012, while playing for the New York Red Bulls of MLS. David Beckham did it for the Los Angeles Galaxy in 2011.

On Tuesday, Trinity High junior Dakoda Correira pulled off the feat in overtime, lifting the Pioneers over archrival Derryfield, 1-0, at Derryfield Park.

In simplest terms, an “Olimpico” (so named in 1924) is when a player scores directly off a corner kick, without the ball touching any of their teammates. Because a corner kick is taken from the end line, the zero degree angle makes such a goal nearly impossible. It requires the player to strike the ball in such a way as to start it out in front of the net and then have it hook back toward the net. 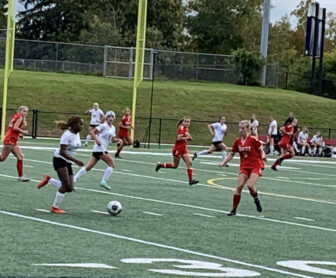 In this instance, that was exactly what Carreira was trying to do.

“I (normally) try to aim for the center of the field so that somebody can kick it in. But on that kick, I tried to make it curve a little bit because we were in overtime and we just needed a goal to win,” she explained.

Carreira’s game-winner came less than a minute into overtime, after Trinity and Derryfield and battled through 80 scoreless minutes. Set up in the left corner, Carreira stepped into a right-footed kick that started toward the front of the net, just as several had earlier in the game. Anticipating the trajectory, Derryfield keeper Ashley Hardner stepped out about six feet in front of her goal to intercept it. Just as she did, Carreira’s ball bent to the left. Hardner reached back but the ball went through her arms and into the net.

“Usually what we’re looking for is a defender is one-on-one against our striker in front of the net and we can just try to tap it in. Today, luck was on our side and it curled right in,” said Trinity Coach Mike Martinez. 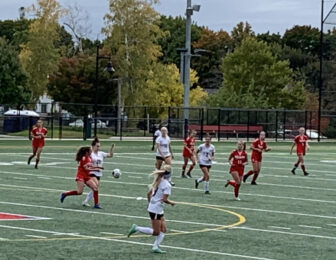 Trinity’s OT goal was one blemish on an otherwise stellar performance by Hardner, who finished with 11 saves, including a brilliant stop on Trinity sophomore Kenzie Goldstein just prior to Carreira’s corner.

“(Hardner) does a terrific job getting everything between the posts,” said Derryfield Coach Jim Watt. “She’s a great coach on the field for us. She does a really great job. She’s one of the stronger keepers I’ve seen out here.”

The win allowed Trinity (5-5-1) to leapfrog Derryfield (5-6-0) into 10th place the Division III rankings, as the regular season heads into the home stretch. Both teams will still need at least one more win, maybe two, to lock up a berth in the state tournament. Fortunately for the Pioneers and Cougars, each will face winless Manchester West in their next game. Trinity and Derryfield will close out the regular season on Oct. 21 with a spot in the tournament possibly on the line.

“We’ve had a lot of injuries, girls coming back from injuries without a lot of recovery time in between,” said Watt., whose team has no lost four of its last five games to drop to 11th in the D-III rankings. “Because of that, I really feel like we didn’t give Trinity the type of game we could have. I look forward to seeing them again.”

The win over Derryfield was huge for Trinity, which came in with just two wins in its previous seven matches. Over that stretch, the Pioneers had scored just six goals, including four in their win over Sanborn.

“Our issue has been putting the ball in the net,” said Martinez. “We move the ball well and we generate a ton of chances. We just haven’t been able to finish them.”

After a sluggish 15 minutes to open the game, Trinity began to assert itself. Midfielders Addie Moynihan and Katie Mulcahy helped Trinity established dominance in the middle and triggered the transitions. Forwards Carreira, Goldstein and Kayleigh Morris kept the Cougars back on their heels, scrambling defensively. But the Derryfield defense, led by Ingrid Bjornas and Katie Nguyen, was up to the task and kept Trinity from getting quality scoring chances.

On one occasion, off a corner, Bjornas was positioned at the post and made a huge stop to save a goal.

Both teams had excellent chances to end the game in regulation. For Trinity, Goldstein was robbed twice by Hardner and had additional chances that went just wide.

Derryfield finally was able to mount some offense of their own in the second half, with midfielder Sam Chappell distributing the ball well. But each time the Cougars looked to work the ball into scoring position, junior co-captains Ava Houde and Bella Skoglund were there to clear the area in front of keeper Kayla Sisson (4 saves). 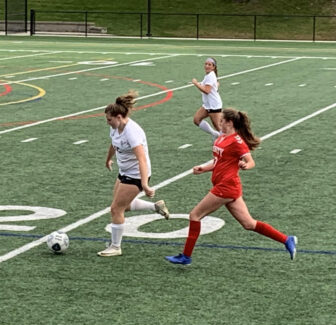