Editor’s Note: This is Part 4 in a series of blog posts by author Milli Knudsen. You can catch up with her previous posts here:

Eventually I was able to trace from 1991-1999 where it stated John’s arrest records did not require an “R” suffix. It first was attached in 2009 with no explanation as to why it suddenly appeared. John had been informed of the change but evidently ignored a paper he needed to sign, and nothing more was mentioned until his transfer to San Diego when the guard mentioned his sex offender status.

I combed through his individual review reports and found no mention of any acts of a sexual nature while in prison. John suggested perhaps we could get the original juvenile records from Shasta County and that would verify his account and further clear this up. For weeks I called and emailed the county courthouse and got no reply.

Eventually I received word that the courthouse was only operating with a staff greatly reduced due to budget cuts. I continued to petition for John’s records and finally was told that I was not able to receive his records because I was a third-party. The clerk suggested that John come to get the records in person because that was the only way they could be released. I wrote back explaining that since he was incarcerated that would not be possible. No reply to that. I even tried to hire a lawyer to acquire the records for John, but could not locate anyone in the Shasta County area who was willing to do it.

In the summer of 2015, John lobbied me to contact the warden, CDCR [California Dept of Corrections and Rehabilitation] Internal Affairs, the California Inspector General and the Prison Law Office regarding getting the R suffix removed. 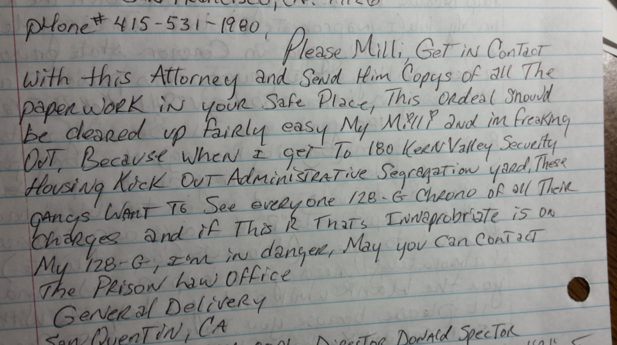 The reply from the warden referred me to Penal Code 314, which in California is the statute on exposing one’s genitals in public stating “314. Every person who willfully and lewdly, either: 1. Exposes his person, or the private parts thereof, in any public place, or in any place where there are present other persons to be offended or annoyed thereby; or, 2. Procures, counsels, or assists any person so to expose himself or take part in any model artist exhibition, or to make any other exhibition of himself to public view, or the view of any number of persons, such as is offensive to decency, or is adapted to excite to vicious or lewd thoughts or acts, is guilty of a misdemeanor.” Having read this, I was struck by how this did not appear to apply to a young man in juvenile hall who has his towel stolen.

The reply from the Inspector General said they could not discuss matters with a third party and encouraged John to use available grievance remedies.

The CDCR replied that the committee that met in 2009 trumped the initial committee’s finding and had therefore the authority to affix the R suffix to his records. Again, they encouraged John to use normal grievance remedies.

A second reply from the CDCR a month later stated that on August 24, 2004, Megan’s Law went into effect in California. This brought not only convicted sex offenders into the realm of those who needed to register but also all those who had “indecent exposure” mentioned in their records. “We understand you may not agree with the decision to affix the “R” suffix designation; however, his “R” suffix was applied within the legal mandates of PC Section 290.”

Not only do I not agree with the suffix being added to John’s prison record, I think there are now hundreds of people who are being listed as sex offenders incorrectly. If a college student participates in a streaking episode as a stunt in hazing, she or he is now a sex offender? If a group of young adults decides to dive into the ocean in California au natural while drinking, they are all going to be required to register as sex offenders throughout their adult lives? If adolescents act up by removing their clothes or by stealing someone’s towel, the naked teenager is going to register as a sex offender as an adult? Really?

For those who are not aware, Megan’s Law was named for seven-year-old Megan Kanka, a New Jersey child who was raped and murdered by a known sex offender in her neighborhood in 1994. Two years later, the federal government mandated that all sex offenders be required to register in the town where they reside so the general public knows where they live and what they look like. Each state differs in the degree and format of registration. It is apparent that California has cast a large net to rope in all possible sex offenders at the expense of individuals who have not committed actual offenses related to rape or pedophilia.

I tried to explain how this federal law had been misapplied to his case, but John is having none of it. He insists we have to keep reaching out in the California system to correct the mistake. I do believe this has put John in danger in prison, but without some cooperation of an official willing to listen to his case, I don’t know what more can be done.

John’s handwriting clearly shows the stress he is under.

Click here to read all of Milli Knudsen’s posts.

Milli Knudsen taught school for 23 years in the Londonderry School District until her retirement in 2002. She has written seven books on genealogy/New England history. One book, “Hard Time in Concord,” led to her becoming the paralegal for the Cold Case Unit in 2010, where she still volunteers. In her spare time she enjoys ballroom dancing, quilting, reading, skiing, and maintains a large collection of Vermont town histories, which enables her to contribute to several websites on genealogy. For the last six years she has been gathering information on the effects of institutional living in the hopes of writing a book on the subject.