KINGSTON, NH – A Derry woman was killed Tuesday after she was struck in Kingston while riding her bicycle by a vehicle that left the scene.

The victim has been identified as Donna Briggs, 59, a retired Hudson police sergeant.

At approximately 8:30 p.m. on Sept. 21 the Kingston Police Department began looking for a missing bicyclist in their town. After a search of the area along Route 125 southbound near New Boston Road, Kingston PD found a bicycle and the rider down an embankment off the shoulder of Route 125.

The bicyclist was identified as Briggs.

Emergency medical personnel responded to the scene to render aid. Briggs was pronounced dead at the scene.

Based upon evidence from the accident, it appears that Briggs was struck from behind by a motor vehicle traveling south, which then left the scene. Video from a nearby business shows it was a dark-colored vehicle that struck Briggs and that the crash happened at approximately 11:37 a.m. 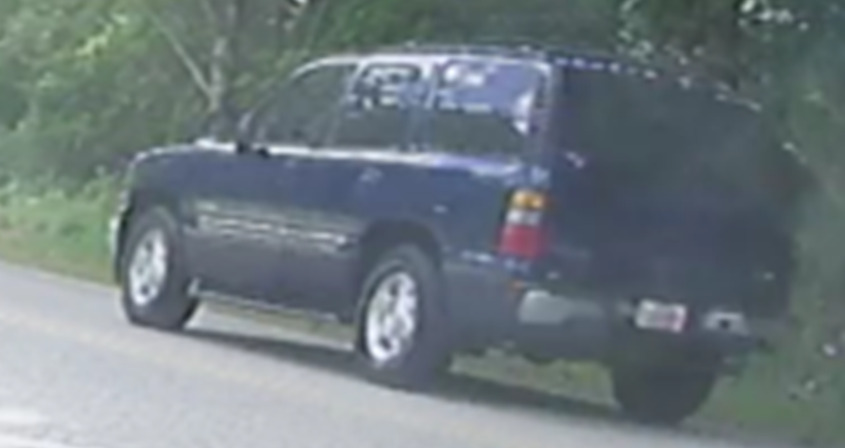 Based upon the above video and still photos, it is believed that the vehicle shown is a blue GMC Yukon manufactured between 2000 to 2006.  It has moderate front-end damage to the passenger side of the front bumper and hood area.  Anyone who has seen this vehicle or who has any information pertaining to this case is asked to please contact State Police Communications at 603-223-4381 or the MCU-TIP Line at 603-628-8477.

At the request of the Kingston Police Department, the New Hampshire State Police Collision Analysis and Reconstruction (C.A.R.) Unit responded to the scene and assumed control of the investigation. Due to the collision, Route 125 was closed for several hours. The New Hampshire State Police CAR Unit was assisted by Troopers from the Troop A Barracks, as well as the Kingston Police and Fire Departments.

At this time, it is unknown why the vehicle struck Briggs or why it left the scene. Anyone that may have further information related to this crash, or that were traveling in that area around 11:30 a.m. on September 21, please contact Trooper Eric Torrens 603-545-4396.