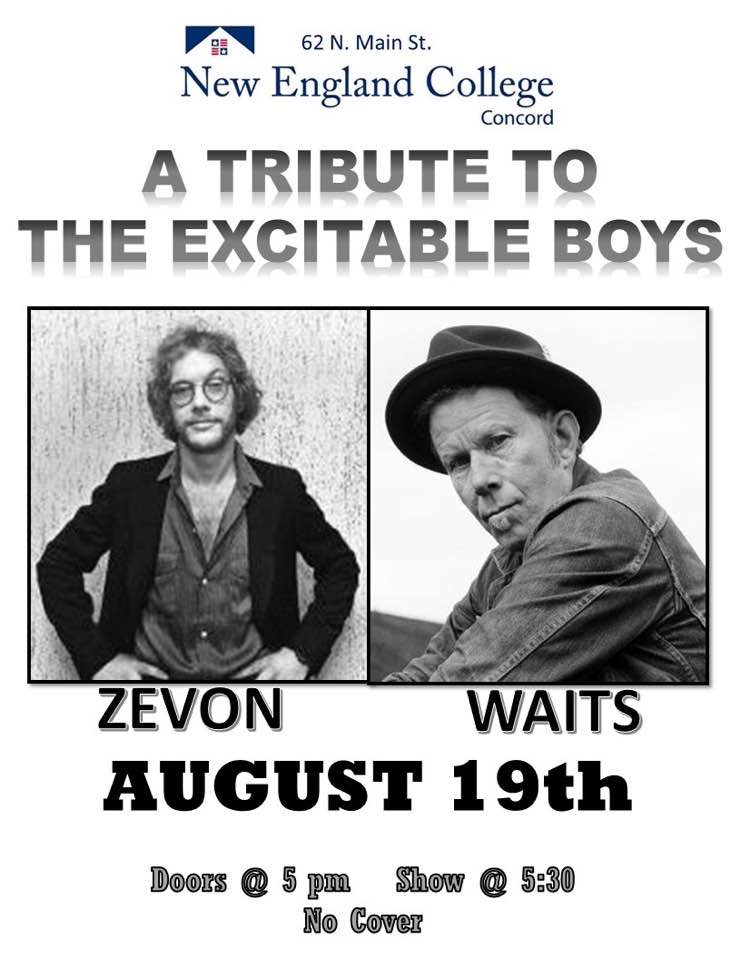 “Werewolves of London” was the very first Warren Zevon song I ever heard.

Probably that is the case with most of us.
The song came out in 1978 on a record called “Excitable Boy.”  Killer album.   Bang, bang, bang.  Every song stung the ball hard off the bat – “Johnny Strikes Up The Band,” “Nighttime in the Switching Yard,” “Roland the Headless Thompson Gunner.”
I didn’t hear the Werewolves song until about 1983, a couple years after the movie “Werewolves of London” came out.  Horrible flick.  But this one incredibly catchy song with the same name was attached to it, and, well, I was hooked on Warren Zevon.
From there, I poured hours into listening to other records by Zevon – The Envoy, Mutineer, Bad Luck Streak in Dancing School and so forth.  I asked my Mother if I could get a perm and a pair of spectacles.  I wanted to look and seethe like Warren.
The artist from Los Angeles who passed away of cancer in 2003, wrote lyrics that were smart, cruel, panoramic, classical.  He could rock, get techie, bombastic, and then slow it down with a ballad that would make you feel worse for the better.
He was “Gonzo” before I even knew what “gonzo” meant.
Bruce Springsteen called Zevon “one of the great, great American songwriters.”
Still, I had to sell my boss at New England College, Jeff Weber, on the idea that we should do a tribute show to Warren Zevon.  Weber knows music, his whole family does.  He’s a fan of Z’s.  He just felt that a night dedicated to Tom Waits would be a better way to go. Who could argue with that logic?
But, I sulked.  I think the boss thought we’d be isolating the audience, simply feeding ourselves with a grab bag full of deep cut songs by Zevon that few other would recognize.
Pleading, nearly crying into Weber’s glorious mane of silver hair, I cried,  “Zevon fans will show!  I swear, boss!  I swear!”
So, we compromised (Imagine that? In these days of rage and hate) and billed this Saturday’s tribute night in Concord at NEC: “A Tribute to The Excitable Boys:  Warren Zevon and Tom Waits.”
The free show starts at 5:30 p.m. and the half-rack of artists playing their favorite songs by these two musical titans all know exactly what they need to do to capture the essence of both artists.
I reached out to three of the six musicians playing (not including Jack Bopp, Mike Gallant and Hank Osborne) – Derek Astles of the Rippin E’ Brakes and songwriters Walker Smith and Don Bartenstein to find out why Waits and Zevon’s music feeds their creative needs.

Q. Why do you think Warren Zevon managed to stay out of the mainstream music scene?  Why didn’t he blow up like Jackson Browne?  Springsteen referred to him as one of our countries greatest songwriters.

(ASTLES)   I totally think Zevon blew up like Jackson Browne.  He had hits.  Neither one of them hold a candle to Springsteen though.
(BARTENSTEIN)   Zevon’s lyrics were just a wee bit bizarre for the mainstream most of the time and his delivery was a bit too rough around the edges and raw for radio at the time.
(WALKER)  I’m not sure how Zevon stayed (for the most part) below the radar. To me it’s one of the best things about him. I think people who know him love him.
Q. Are you guys bigger fans of early acoustic Tom Waits, like “Closing Time,” or the junk yard clang, hoof clop sounds of later Tom Waits?
(ASTLES)  My favorite Tom Waits is The Early Years Vol. 1.
(BARTENSTEIN) Personally, I prefer the earlier stuff.  I understand dissonance as an art form, but I have a hard time extracting the soul from it.
(WALKER) Old stuff! I can appreciate some of the more contemporary stuff but the old jams really get in there.
Q. What’s the key to putting your own spin on a cover song?
(ASTLES)  Don’t “F” it up.
(BARTENSTEIN)  I listen to a song and try to “get” the feeling that the artist was trying to convey.  I then try to interpret and project that with the tools I have available.
Q.  What is it about Waits and Zevon that you respect the most?  Both were/are terrific wordsmiths.  Is it the lyrics, the sounds they created or the persona behind these men?
(ASTLES) Lyrics for both of them for sure.  More persona for Tom Waits.  Zevon’s like that guy in corner strumming who’s better then anyone else in the room.
(BARTENSTEIN)  I would say an amalgam of all three of those points.
(WALKER) With Zevon it’s the storytelling. No one could write a song that was catching and engaging like Warren Zevon.  Tom Waits in all about tone. Which ever incarnation of Tom you got it was authentic. Whether it was the lonely songwriter, the crooner or the spastic blues man.
Q. Why did you choose the Zevon and Waits songs that you did?
(BARTENSTEIN) Initially, because they are my favorite Zevon songs.  In retrospect, they strike me as different facets of his creative canvas.
(WALKER) “Accidentally Like a Martyr” is simply my favorite Zevon song. The fact that nobody else got it before me was a miracle. It’s just one of those songs that you instantly connect with. Beyond that I can’t explain it.
Q.  It’s a terrible question, but what’s the one CD by Tom Waits and Warren Zevon that you just couldn’t live without?
(ASTLES) That’s a terrible question.
(BARTENSTEIN) It used to be Excitable Boy, but now it is “The Wind.”  Zevon created an amazing epitaph.
(WALKER)  Zevon “Excitable Boy.”  Waits “Closing Time.”

Rob Azevedo covers the NH music scene and is host of  Granite State of Mind on Friday nights at 9 p.m. on WMNH 95.3 FM. He can be reached at onemanmanch@gmail.com.