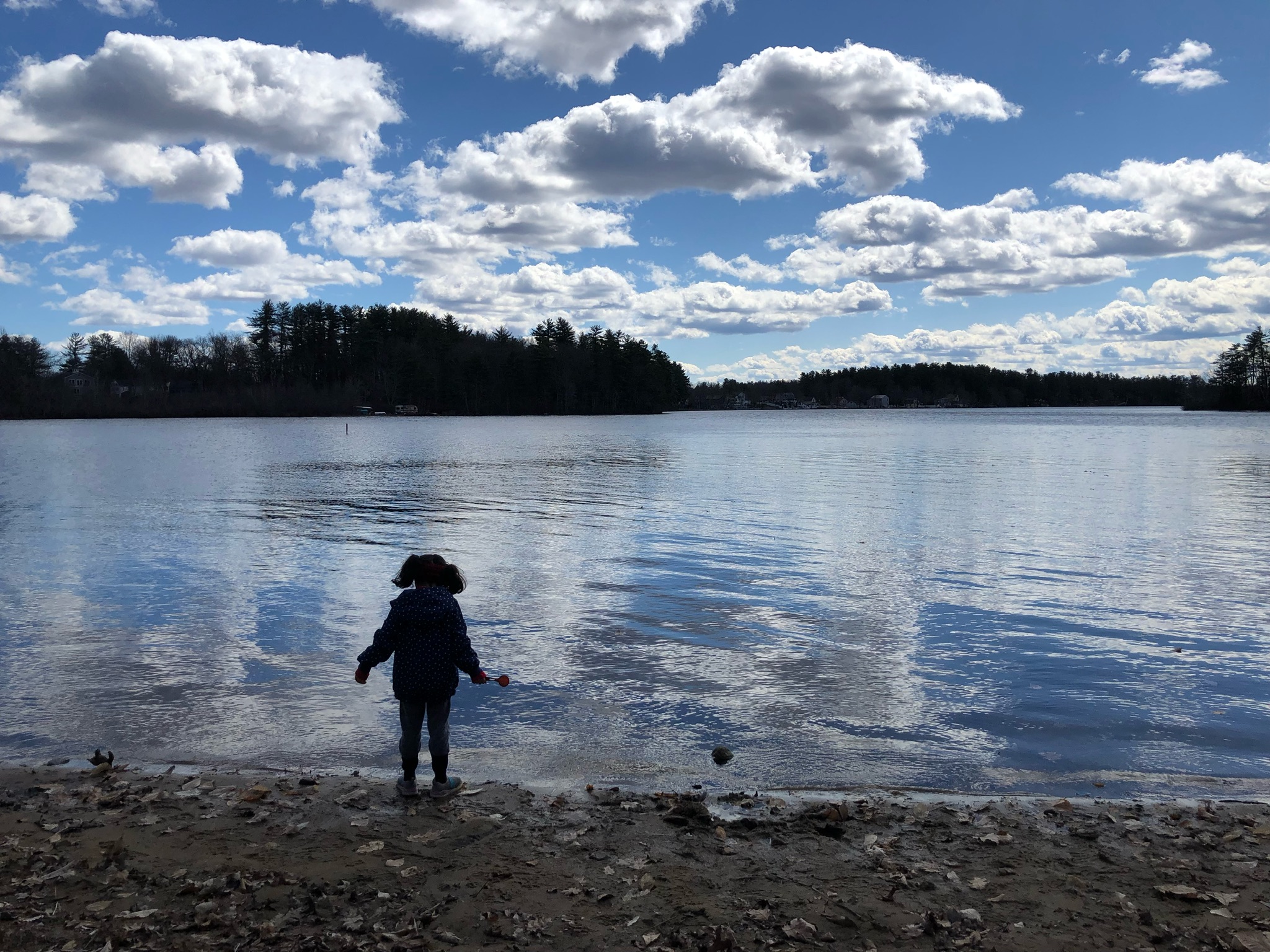 There is no better time to hike with kids in New Hampshire than during mud season. That’s right, you heard me.

I’m not talking about the ecologically sensitive places among alpine flowers starting to thaw. I wouldn’t suggest that you let your kids go bounding off-trail into the deep, wet, tick-infested leaves. But there IS a proper way to play outside during this most New Hampshire of seasons. And be warned – it does involve getting dirty. But that’s the point.

On this clear, cool mid-March day, there is no greater testament to the allure of mud season hiking than the rolling hills and oh-so-muddy beaches of Kingston State Park. Somehow, we forgot my daughter’s boots, but no matter, the mud would find a way to her feet regardless of how we protected them. Little Bean charges headlong across the wide lawn, through the old school metal playground and right up to the cold, clear water of Great Pond. For a moment, it looks like she’s going straight into the water, but she screeches to a halt a half foot from the water and drops to her knees. 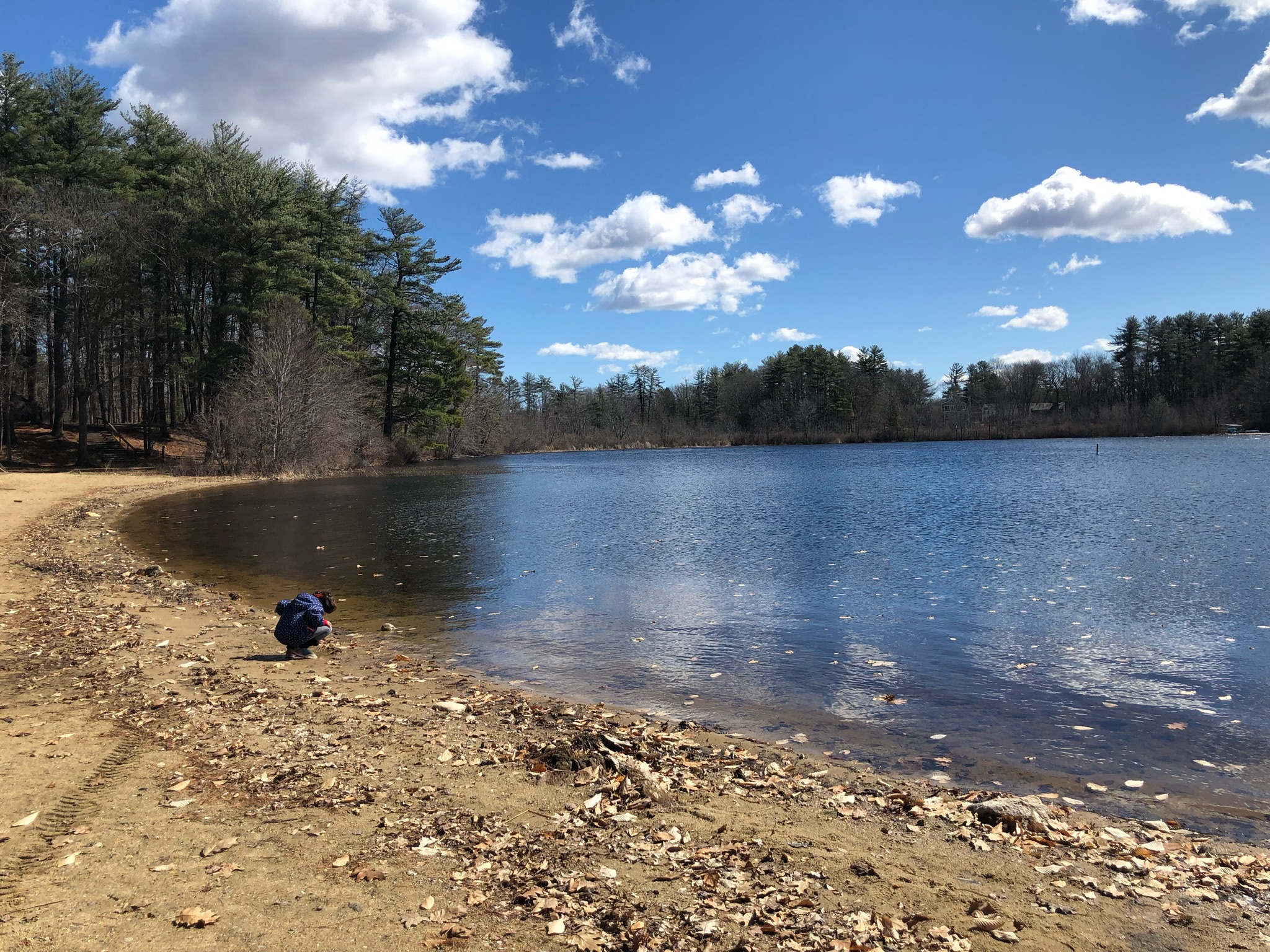 She doesn’t wait for permission to get dirty on trips such as this anymore because she understands that getting dirty is why we’re here. In my day pack, I carry a packet of wet wipes, a towel and an extra pair of socks for both of us. My wife and I have raised our daughter to accept the natural world not as a brief interlude or vacation, not as something that is special and happens occasionally, but rather as a part of everyday living. And life can be messy. Therefore, nature is messy – and never so messy than during mud season.

“Daddy look,” my daughter is calling, “what are these things.”

All along the muddy shore are thousands of tiny squiggling sand shrimp. The warmer weather and perfect shoreline conditions must have contributed to a recent spate of hatchlings and they are everywhere. She decides they need a hotel. No, better than a hotel, they need a shrimp resort.

Using a series of shells, small rocks and even a small loon feather, she constructs a sand-and-mud mound resort, digging a channel from the hotel to the pond, scooping out a pool area and even a small stone shed where the shrimpys, as she calls them, can rest out of the sun. Then she goes and gets them, plucking them up and plopping them in their new resort.

It’s a long project. She doesn’t need my help. She cares not at all about the mud. I’ve seen that look in her eye and figure it’s going to be a long afternoon. So, I find a nearby park bench, also filthy and covered in dog paw prints, spread out our picnic and lean back to watch her.

I think of naturalist and journalist Richard Louv who wrote that “Passion is lifted from the earth itself by the muddy hands of the young.” He may not have had a luxury hotel for sand shrimp in mind when he wrote that, but either way, my daughter’s passion is on display.

Kinston Park is beautiful this day, mild with an occasional sharp wind that cuts across the lagoon to remind us that winter hasn’t quite let go yet. There are a few dog walkers, but this is one of those New Hampshire places that, during off-season, becomes magical – a place where only locals and those willing to get filthy would dare to go.

Meantime, my daughter requests that I be present for the opening of her hotel, so I lumber down to the squishy shore and hand her a tin cup of hot chocolate, the steam rising up in front of her smiling face.

“Daddy, we should go check out that staircase,” she says. “And then let’s find some rocks.”

The days grow longer now, and soon swarms of both bugs and tourists will descend on small parks like this all across the state. But today, the mud is ours.