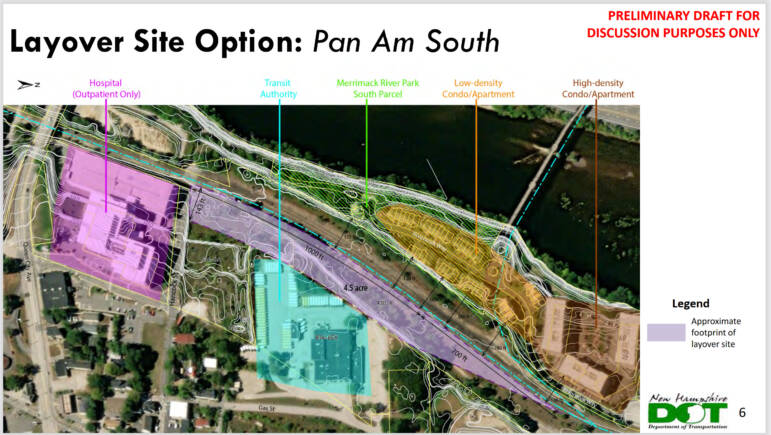 MANCHESTER, N.H. – On Tuesday night, Manchester Board of Mayor and Aldermen (BMA) approved a layover location for the proposed MBTA commuter rail extension into Nashua and Manchester.

In a presentation to the BMA, a trio of experts led by City of Manchester Senior Planner Jodie Nazaka explained that like with other rail line terminus stations, a nearby layover location is needed for trains on the line for overnight and mid-day recharging and storage.

The proposed location, also known as the Pan Am South site, is adjacent to Elliot Urgent Care at River’s Edge facility and the Manchester Transit Authority facility on Gas Street.

Other considered locations included the proposed terminus station near the Elm Street Market Basket, the Pine Grove Cemetery Backland and land adjacent to the U-Haul in Bedford.

At-Large Alderman Joseph Kelly Levasseur asked what the cost to Manchester, would be with AECOM Planning Group Manager Jay Doyle indicating that costs of the layover site could not determined until after environmental assessment studies and financial plans are finalized. Doyle added that even after that point, costs would be spread across the entire line rather than one specific community.

Ward 8 Alderman Ed Sapienza expressed concern with MBTA budgetary shortfalls and Ward 6 Alderman Sebastian Sharonov asked if approval on Tuesday would be preliminary or if additional approval would be needed once financial plans could be ascertained.

Doyle responded to Sharonov’s question by stating a secondary approval would be under the purview of the BMA, but a later presentation on the layover site would be informational.

In response to a question from Ward 3 Alderman Pat Long, Doyle said that the proposed downtown station would likely be ready for passengers within four to six years, although that figure is dependent on federal funding availability and other proposed projects in the federal funding queue.

Doyle also told Ward 5 Alderman Anthony Sapienza that work on the site would likely create local jobs, although how many jobs cannot be ascertained until the financial plan is finalized.

The site was approved by the BMA on a non-unanimous voice vote.