For many many years, I’ve been convinced that the singer-songwriter from Northern Ireland, Van Morrison, is much more than just someone with one of the most powerful and recognizable voices in music history.  I think he’s been a spy all along.  Stay with me.
I don’t know for whom or what his specialty would be in the field of espionage. Then again, Van could be many things. A master safe cracker, a hard-boiled interrogator, someone who could blend in with Texas oil men over whisky lunches drenched in corruption and also keep pace with a rotten batch of Louisiana drug smugglers.
He’s just got that look.
Google any image of Van Morrison and right there is the main character of your pulp novel.  The rounded face, the fedora, the hard belly and thick knuckles, laser eyes and jagged Irish teeth, both of which will cut right through you.  A man influenced by anything and everything having to do with the blues, jazz, poetry, rave, rock and the magical musical universe of sound.
Morrison is the father of such classic albums like Astral Weeks and Moondance.  He’s the same guy that wrote “Gloria” and was knighted by Prince Charles, the same heel-kicking, purple people eating performer that nearly stole the show at the “Last Waltz” in 1976 when he sang a rousing version of “Caravan.”  That guy, well, that guy we call “Van The Man” is an enigma to me.  A true mystery.   It’s like he works in the shadows, outside the lines, undercover in the night.
A contemporary to the likes of Mick and Paul, Bruce and Neil, Van is unlike any of those rock stars vocally or musically.  He’s simply just better. If you could sit Mick Jagger still for three minutes and ask him to sing “Amazing Grace” it would be okay.  Just okay.  Ask Van to do the same thing and grass will spring from your neck as your teeth begin to melt. 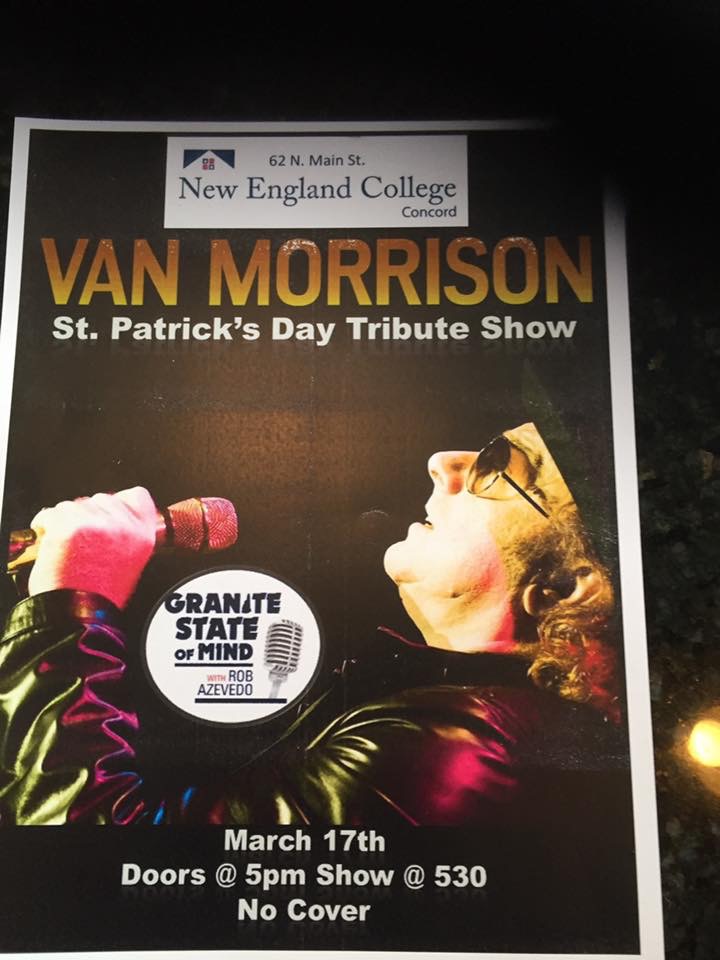 Springsteen tried to get a little trippy at times on his second album, “The Wild, the Innocent and the E-Street Shuffle,” and he admits to being directly influenced by Van Morrison’s 1968 masterpiece, Astral Weeks, during the bands recordings in ’73.  Earthy with sonic girth that borders on wizardry, Astral Weeks has stood the test of time, crushingly so.

Writing wise, it’s baffling that Morrison’s words don’t get the love that his voice does.  If you sit and read his lyrics, to say, again, Astral Weeks, the opening number on the record, the lyrics are Lord Byronesque, equally as poignant as Dylan’s best and sung with a touch of Spanish hustle.
Through the years you would lose track of Van, never quite knowing if he retired from music or was percolating on some ideas in the Isles. Then, like in the 1990s, he releases Enlightenment and a song like “Real Gone” emerges from the cracks and once again you are completely and totally blown away with the marching of the horns blessed with Morrison’s golden pipes.
Now, at 72, Van is still on the road, still playing jazz, playing sax, blowing the harp, collaborating with his heroes and such heralded organist as Joey DeFrancesco, which he joined forces with on his latest studio effort, “You’re Driving Me Crazy.”
And the singer makes no bones about where his music is heading: right back to the beginning, when he didn’t have to explain the music.  He just did it.  It’s been years since Morrison has relied on hits like “Brown Eyed Girl” and “Domino” to fill a theater.  Instead, Morrison said in a recent interview, “Now, I’m basically at the point where I don’t really care what everyone else wants.  I’m doing what I want.”
So are we, Van. That’s why this Saturday – St. Patrick’s Day – GSM is hosting its monthly tribute series at New England College in Concord where we will raise a pint of Guinness to the works of Van Morrison as a half-dozen artists bare their souls to sing his songs.
The Van Morrison tribute starts with doors at 5 p.m., show at 5:30 p.m.  Free show!