MANCHESTER, NH – Video footage of an incident over the weekend  during which four people were arrested outside an Elm Street establishment at closing time has stirred social media discussion over police brutality, and initiated an review by police of the force used in this arrest.

A video [see below] posted in a thread on Manchester Information Facebook page  has initiated a heated discussion over how the incident was handled based on the three-minute clip. The action in the video begins with several officers on the ground apparently attempting to gain control of a man who is on the ground.

One of the four people arrested, Brandon Bakios, is pictured in his mugshot with facial wounds, which police noted in their press release as an “injury to his left eye.” They also note that Bakios was Tasered by police. Police are seen using Tasers in the video clip.

According to the initial arrest report issued by police on Nov. 19, the initial police call came in from an employee of Bonfire who reported a woman, identified as Katie Lavertue, who was asked to leave the bar and “was not welcome” continued to try and enter the bar. By the time police arrived they encountered Bakios and Lavertue, both of Lowell, Mass., and as police tried to get identification from Lavertue, Bakios interfered with police, then argued with the Bonfire bouncer. Police say Bakios “was told several times” to back off. Bakios, the bouncer and an officer ended up on the ground as a crowd gathered, and more officers arrived, eventually using a Taser to subdue Bakios.

Two others were arrested for “disorderly conduct,” Isaiah Kitchen, 33, of Manchester, and Daniel Ferrigno, after both refused to leave the immediate area when told to do so by police.

Video footage of a scene from an arrest by Manchester NH Police as posted on Spee.ch

The Manchester Police Department serves and protects the citizens of the Queen City each and every day with both proactive and reactive policing. Each call for service we respond to is unique. The video from the arrest outside of Bonfire Restaurant & Country Bar, early Sunday morning, highlights how quickly a dynamic situation can unfold.

There are occasions when an officer must use force in arresting a combative suspect.  As we do with all police reports, we are actively reviewing this incident to ensure our officers followed the proper procedures during the four arrests outside of Bonfire. We are also reviewing the criminal charges during this active and ongoing investigation.

We are extremely grateful to our local businesses and patrons who took the time to assist in the incident and thank them for their continued support while our officers dealt with multiple non-compliant individuals on Sunday morning.

“The Manchester Police Department is actively reviewing the events that happened early Sunday morning in front of Bonfire Restaurant & Country Bar, including reviewing use of force reports. We are committed to getting all the facts about what transpired in order to obtain the full context.

The City of Manchester is committed to ensuring the safety of our residents and visitors, as well as our police officers.

If anyone has any information regarding the incident in front of Bonfire Sunday morning, please contact Sergeant Joseph Lorenzo, Manchester Police Department at 603-668-8711.”

Alderman Bill Barry, who works in law enforcement for Auburn Police, responded to the police statement via email:

Thank you very much for your service to our city. It is unfortunate that some people in today’s society have very little respect for authority and seem to take the time to challenge it instead of doing what is asked of them. I appreciate your efforts to keep our city safe and our residents protected. The police are always on the end of reacting to a situation as opposed to the people that want to challenge them. The police have seconds to respond to this type of negative activity. Again, thank you for keeping us safe and protected.

In a follow-up conversation, Barry elaborated saying that he had also seen the video that has been circulating on social media.
“I only watched it the one time. I wanted to watch it again, but couldn’t find it. But the thing about videos like this taken by people with cell phones, you don’t see the whole situation from start to finish, you only see when police are trying to take someone into custody,” Barry said. “You don’t know what happened prior to when someone starting filming. The video was taken when the situation had already escalated.”

Barry said he couldn’t comment further on that particular situation because he only knows what he saw on Facebook. But one thing he knows after decades of police work: Times have changed.

“You never saw this years ago. People had respect for authority. Now there’s very little respect. It’s unfortunate – and it’s not just police. It extends to people like teachers and coaches,” Barry said. “I’ve talked to teachers and they can’t believe they walk into the classroom and kids are saying ‘F-U’ to them. And what can they do? Their hands are tied.”

There are more than 200 comments on the Facebook thread pertaining to the arrest, including comments from a Katie-Ann Lavertue,  identified in the police report as one of the four people arrested. 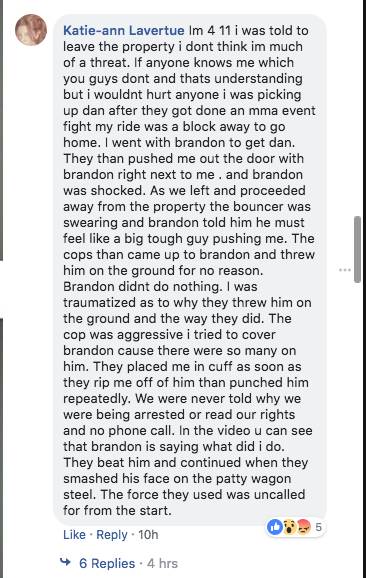