MANCHESTER, NH — Trinity and Manchester will both be playing in the Division 1 State Hockey Tournament next week but the teams are moving in opposite directions heading into the post-season.

On Wednesday, the Pioneers got two goals from senior Finn McDonough and completed a season sweep of the Kings with a convincing 4-1 win at the JFK Memorial Coliseum.

The win lifts Trinity (9-7-1) into sixth place in the Division 1 standings and will close out the regular season Saturday, at home, against Bishop Guertin. With six wins in their last eight games, the Pioneers are playing its best hockey of the season just in time for the tournament. 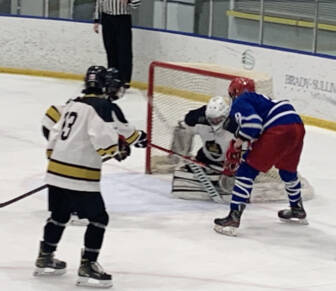 “At the beginning of the year, 10 of our guys had Covid, so we were missing a lot of games. I feel like we’re just starting to jell a little bit now,” said Trinity Coach Mike Connell. “Lines that we didn’t know exactly if they were going to work are starting to work better now. Our defense is starting to play with a little bit more confidence and both our goaltenders have been great.”

At the other end of the momentum spectrum is Manchester (8-9-0), which has lost four straight games to drop to ninth in the standings heading into Saturday night’s regular season finale at Timberlane.

The reason for the Kings’ recent struggles isn’t a mystery. Loaded with talented scorers, Manchester was averaging 5.0 goals a game through its first 10 (6-4-0). But since a 5-2 win over Nashua South/Pelham on Feb. 5, the Kings have scored a TOTAL of just four goals in five games (1-4-0). 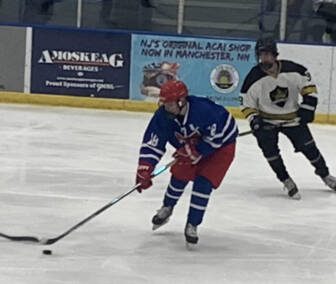 “These guys on our side here have got to get serious and have got to want to win these big games,” said Manchester Coach Eric Fischer. “When they come in and they slow down in the third, or in any period, it hurts us. We need everyone firing and we just haven’t seemed to have that in any of the games.”

On Wednesday, that “slow down” seemed to start in the second period. Trinity dominated the second and third periods, outshooting Manchester, 31-11, over the final 30 minutes (43-23 overall).

McDonough gave Trinity a 1-0 lead midway through the first period, with an assist going to Will Brauer. But the lead was short-lived. Less than three minutes later, freshman Ryan Marden scored an unassisted goal for the Kings, tying the score after one period. 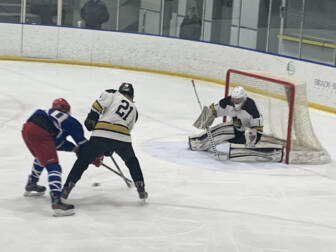 Trinity began to assert itself in the second period. Aggressive forechecking by the Pioneers’ forwards kept the Kings back on their heels and made it difficult for them to break out of their own end and transition into attack mode.

Manchester even had difficulty generating offensive chances on a power play early in the period. Instead, a shorthanded goal by junior Aiden Palmeter gave Trinity a 2-1 lead. Palmeter poke-checked the puck from a Manchester defenseman just outside the blue line, walked in alone and beat Kings’ goalie David Hoodie with a wrister to the blocker side.

“One of the things we’ve harped on is that in the first period, we’ve seemed to come out a little slow, for whatever reason,” said Connell. “But the second and third period — against Exeter the other day, against Bow and some other teams — it seems like once we get going, we’re able to control the corners a little better. I thought our guyzs did a really good job in the second and third.”

Trinity could easily have built on its lead, were it not for the spectacular play of Hood. The senior netminder finished with 39 saves, including 17 in the second period. His best save came on a Trinity power play late in the period. Palmeter slid a centering pass to McDonough, who was standing alone on the doorstep. Hood somehow managed to slide from the left goalpost to the right in time to stop McDonough’s one-timer. 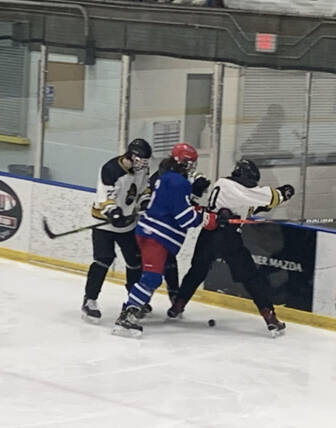 “David Hood is an incredible athlete, a great student and just an all-around good kid and we’re lucky to have him,” said Fischer. “He made some brilliant saves out there tonight. When you thought the net was wide open, he got some part of his equipment there. He was excellent.”

While not facing as many shots, Trinity sophomore goalie Brendan Heppler also had a strong game, finishing with 22. saves. A key stop came in the final minute of the second period, as the Pioneers held a slim 2-1 lead. Manchester junior Colin Fields made a nice deke-and-drag move to slip a defender and get a clean look from about 20 feet but Heppler came up with the stop.

Trinity kept up the pressure in the third period and got some insurance on McDonough’s second goal of the game, 2:56 into the period. Again it was Palmeter with the centering pass from along the boards. This time, McDonough was so wide open he actually had time to pause, pick a spot, then snap off his shot to beat Hood.

Trinity junior defenseman Trevor Brown made it 4-1, midway through the period, with an assist going to junior Aiden Hurley. 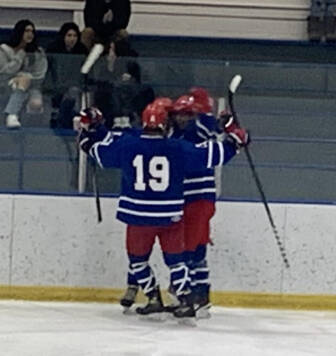 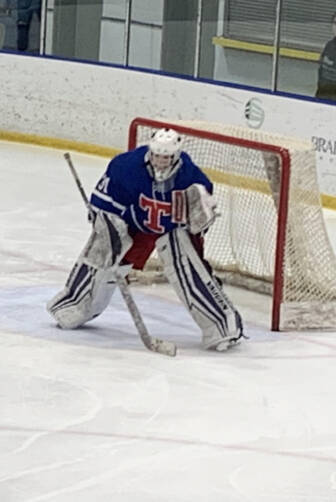