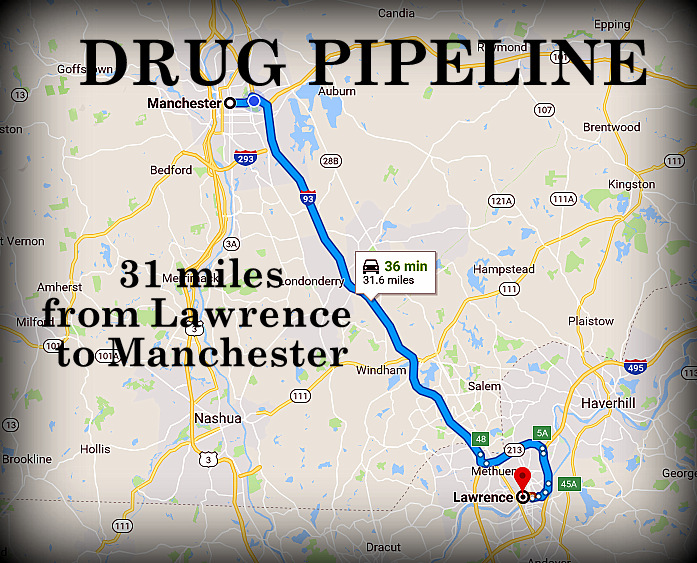 CONCORD, NH –  For now, the deadly drug pipeline between Manchester and Lawrence, Mass., has been cut off.

April saw the culmination of a year-long drug investigation by multiple agencies, bringing in a huge haul for law enforcement officials – 45 people arrested in two sweeps netting 30 kilograms (more than 60 pounds) of fentanyl, plus two guns and $500,000 in cash.

Authorities announced the results of the investigation April 25 during a news conference held at the U.S. Attorney’s office in Concord. The investigation focused in on an “extensive and organized” drug-trafficking organization led by the two men from Lawrence, Mass., the Martinez brothers, Sergio and Raulin. The Martinez brothers allegedly used a vast network of dispatchers and distributors to serve customers large and small with knowledge that a substantial amount of drugs were going to New Hampshire. They allegedly maintained a residence in Lawrence, staffed by dispatchers who took drug orders over various “customer phones.” This residence was called “the base.” Dispatchers allegedly then communicated with distributors located throughout the Merrimack Valley to arrange for customers to meet them. The Martinez brothers also allegedly employed individuals responsible for making sure distributors were consistently supplied with 200-gram bags of fentanyl and were returning drug proceeds made from the sales.

The indictments are the culmination of a year-long investigation by the DEA in coordination with federal, state, and local authorities in New Hampshire, Massachusetts, and Maine.

On April 4, 2018, the following people were charged with participating in a conspiracy to distribute, and possess with intent to distribute, fentanyl:

A second sweep on April 18, 2018, resulted in the following arrests, all charged in related indictments with conspiracy to distribute, and possess with intent to distribute, fentanyl:

As of April 24, 2018, 12 of these individuals were in custody. Leon Mandigo has not yet been taken into custody.

If convicted, most of the defendants charged on April 18, 2018, also face a mandatory minimum of 10 years in prison and a maximum sentence of life, as well as a fine of up to $10 million.

“Fentanyl is responsible for the lion’s share of overdose deaths in the Granite State,” said U.S. Attorney Murray. “The law enforcement community in New England is united in the effort to end the opioid crisis. This investigation is just one example of our commitment to stopping the distribution of fentanyl in New Hampshire. Public safety is our top priority and we will continue to work hard each day to protect our communities by identifying and prosecuting those who are responsible for distributing fentanyl and other deadly drugs.”

“Fentanyl and its analogues kill more Americans than any other drug,” Attorney General Sessions said. “President Trump has made ending our national opioid crisis a top priority for this administration. We at the Department of Justice embrace that goal and we are pursuing it aggressively. The quantities of fentanyl that were allegedly trafficked in this case are shocking. And so I want to thank DEA and our other federal partners as well as the state and local law enforcement officers from three different states for their hard work on this case. We will prosecute this case to the fullest extent of the law and continue to take dangerous drugs — and drug dealers — off of our streets so that every American can be safe in their community.”

“The Granite State is faced with a fentanyl crisis unlike ever before and DEA’s top priority is combatting the opioid epidemic,” said DEA Acting Special Agent in Charge Albert Angelucci. “DEA is committed to aggressively pursuing Drug Trafficking Organizations who are coming from out of state to distribute this poison to the citizens of New Hampshire in order to profit and destroy people’s lives. This investigation demonstrates the strength of collaborative local, county, state and federal law enforcement efforts and our strong partnership with the U.S. Attorney’s Office.”

The indictments are allegations. The defendants are presumed to be innocent unless and until proven guilty beyond a reasonable doubt in a court of law.

This investigation was part of the Organized Crime Drug Enforcement Task Force (OCDETF). The OCDETF program is a federal multi-agency, multi-jurisdictional task force that supplies supplemental federal funding to federal and state agencies involved in the identification, investigation, and prosecution of major drug trafficking organizations.