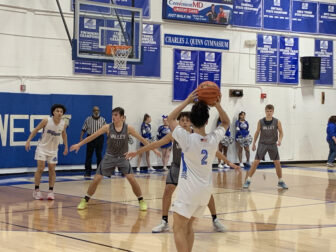 MANCHESTER, NH — If a high school basketball coach averaged (an outstanding)18 wins per season over 20 years, they would still be 140 victories shy of the 500 wins earned by John Langlois in his storied career.

The Manchester West coach reached that lofty milestone Tuesday night, as his Blue Knights knocked off Merrimack Valley, 61-54, at Quinn Gymnasium. After the game, he celebrated with players, both past and present, as well as with family and friends in attendance. 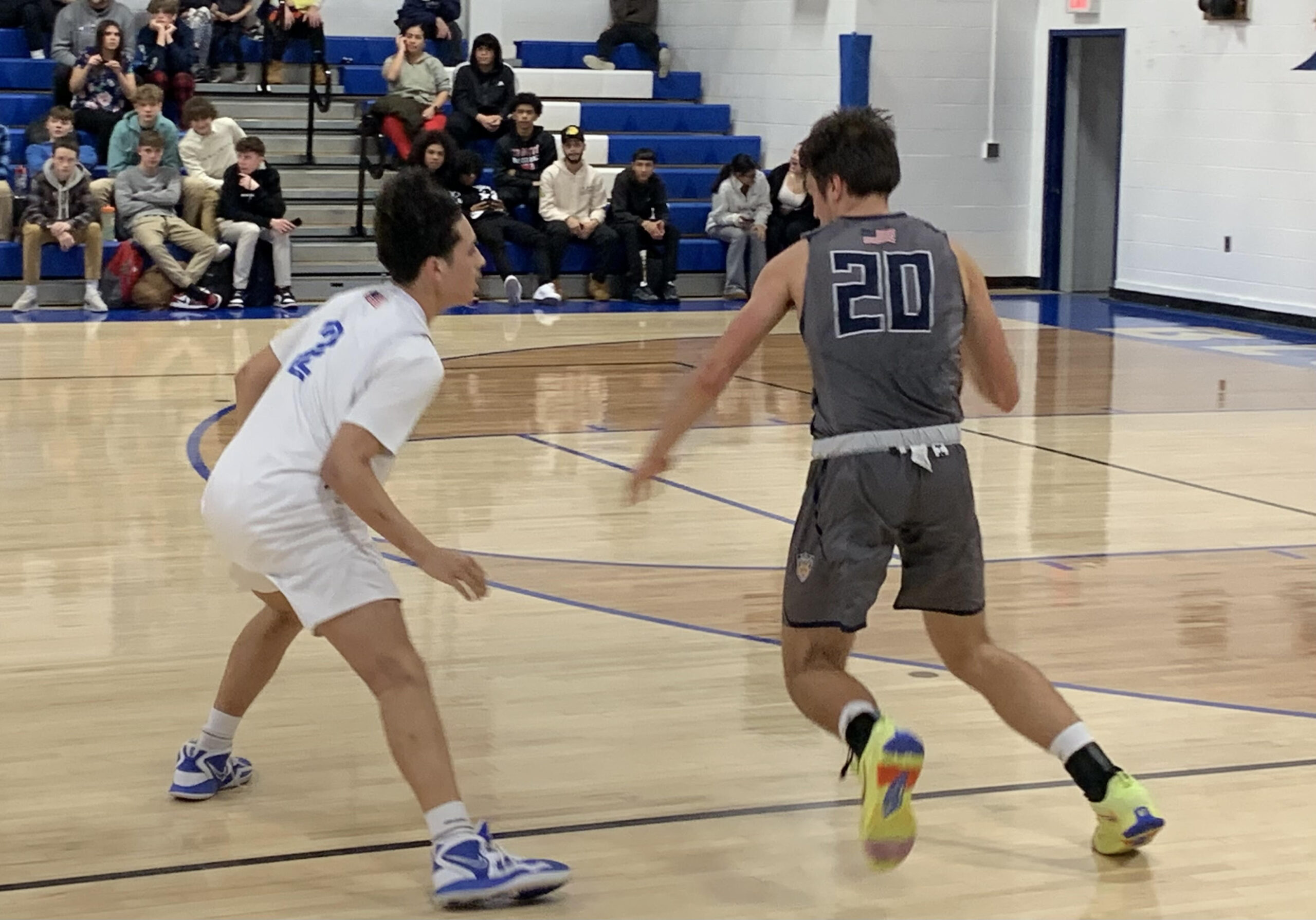 “I’ve had so many great players over the years, some of them are here tonight,” said Langlois. “500 is nice but I’m really more interested in the win tonight. This was a good win. We played well.”

In just two seasons at the helm of the Blue Knights, Langlois has led a remarkable turnaround. After missing the state tournament last season, West is presently ranked No. 7 in Division II. Tuesday’s win over No. 5 Merrimack Valley (8-3) improved the Knights’ record to 7-2 on the season and has fans and players dreaming of places the program hasn’t been in decades.

“It’s been 30 years since this school has won a (boys basketball) state championship,” said Langlois. “I’m happy with the progress we’ve made. This was a win over a very good team tonight. We’ve still got a lot of things we can be doing better. But I’m very pleased with where we are.”

Great night for @WestBlueKnights hoops coach John Langlois, picking up career win No. 500, as the Blue Knights improved to 7-2 with a win over Merrimack valley! @nhhssports @nhsportspage @andrewsylvia @ManchInkLink pic.twitter.com/RNpNaH6tkS

Junior Max Shosa led West with 27 points, to go along with nine rebounds, four steals and a blocked shot. Shosa proved to be just as dangerous in the paint as beyond the arc, with three dunks and three 3-pointers. Senior guard Angel Castro added 14 points and seven rebounds, while senior forward Aiden Scott-Beaulac chipped in with 10 points, nine rebounds and a pair of blocked shots.

West led from wire-to wire, jumping out to a 17-8 lead after one quarter and leading 29-21 at halftime.

Brandon Dukette tried his best to single-handedly keep Merrimack Valley in the game. After being held scoreless in the first quarter, the senior forward exploded for 27 points, including a trio of 3-pointers. He also had nine rebounds and a pair of steals. It was Dukette’s 3-pointer just before halftime that pulled Valley within eight points at the break. 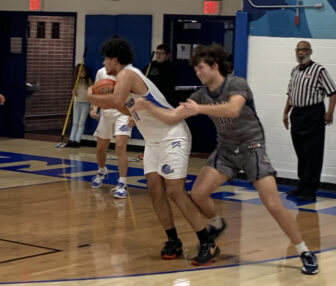 Shosa gave West some breathing room in the third quarter. He drained a 3-pointer from the corner, then picked off a pass and sailed in for a dunk to give the Knights a 43-29 lead with less than two minutes to play in the third. But Dukette answered with a pair of free throws and a trey of his own, cutting the deficit to 45-34. 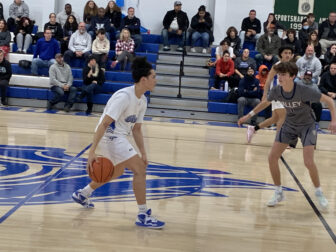 Merrimack Valley started using full-court pressure in the fourth quarter and the press gave the Blue Knights all kinds of problems. Bad passes, turnovers and general sloppiness on the part of Manchester West help Merrimack Valley carve into the lead. A 12- 4 run pulled the visitors within 53-48, with 3:07n left to play in regulation. But that was as close as Valley could get. Scott Beaulac dropped in a runner in the lane and later, it was Shosa putting back his own miss to build the lead back to double digits.

Winners of six of its last seven, West will play host to Bishop Brady, Thursday at Quinn Gymnasium.