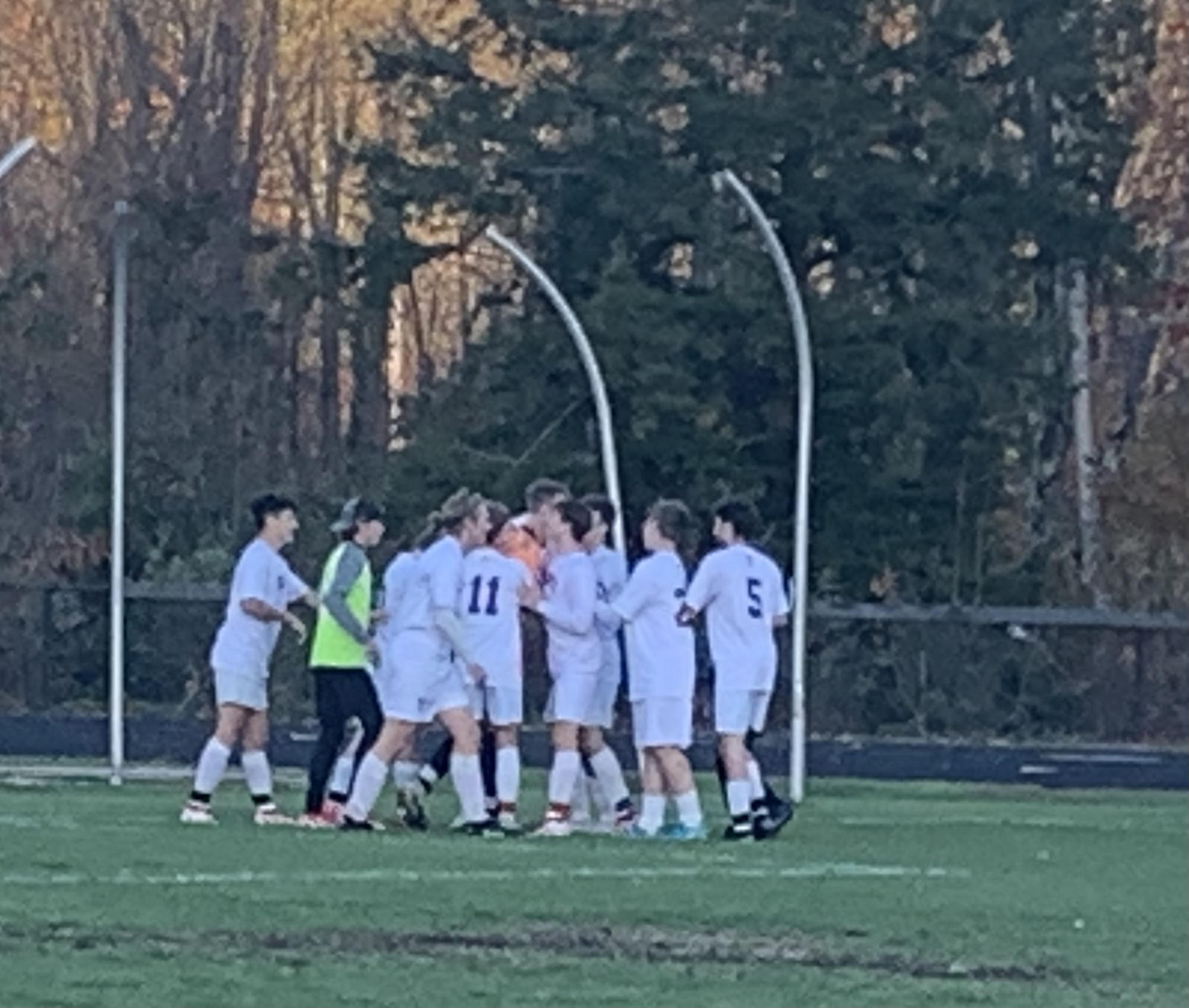 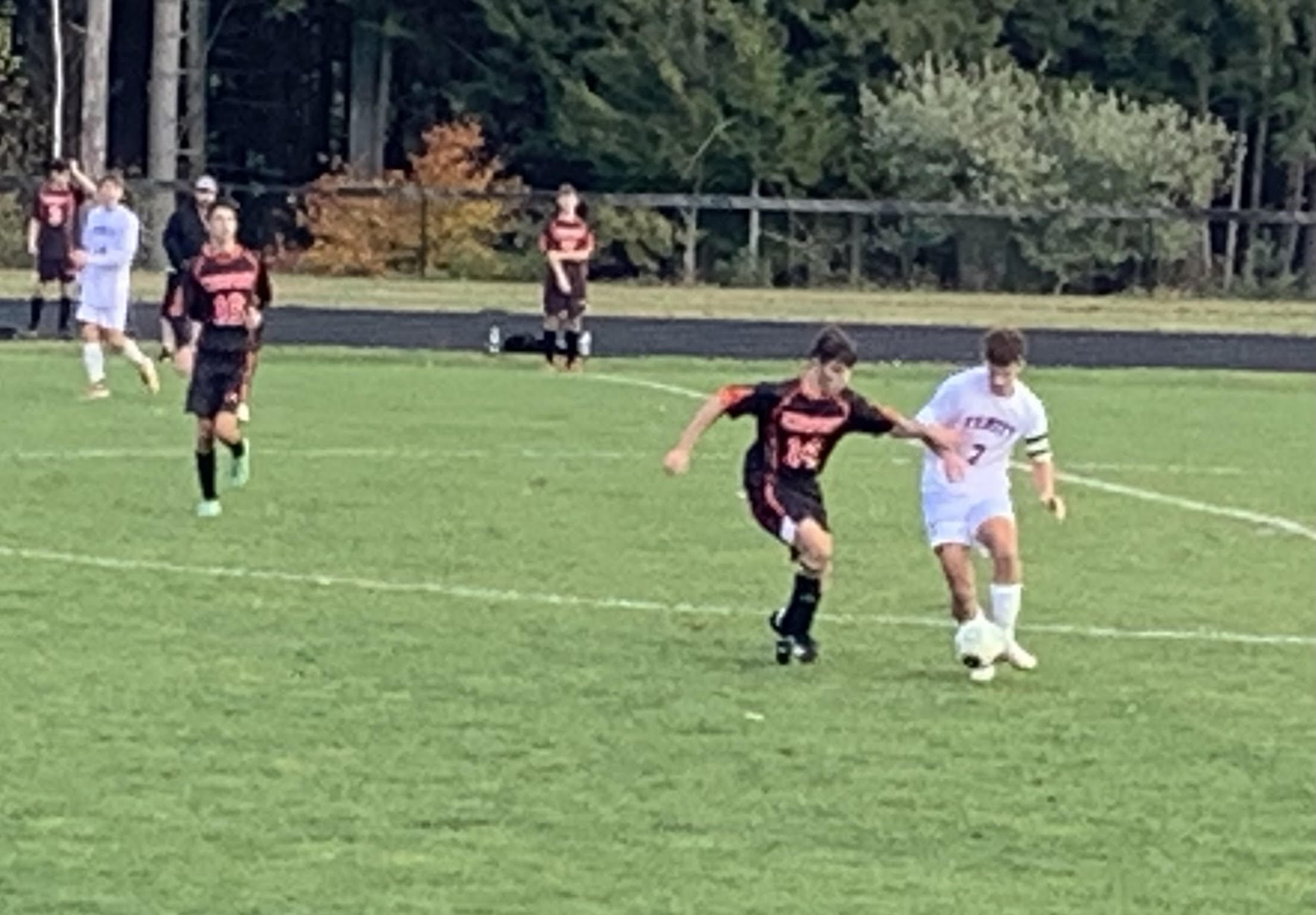 Friday’s win marked the second straight year Trinity has eliminated Conant from the state tournament in the quarterfinals. But unlike a year ago, the teams would not be able to settle matters in just 80 minutes.

With the score tied, 1-1, after regulation, the teams played two scoreless, 10-minute overtime periods to push the game to PKs. 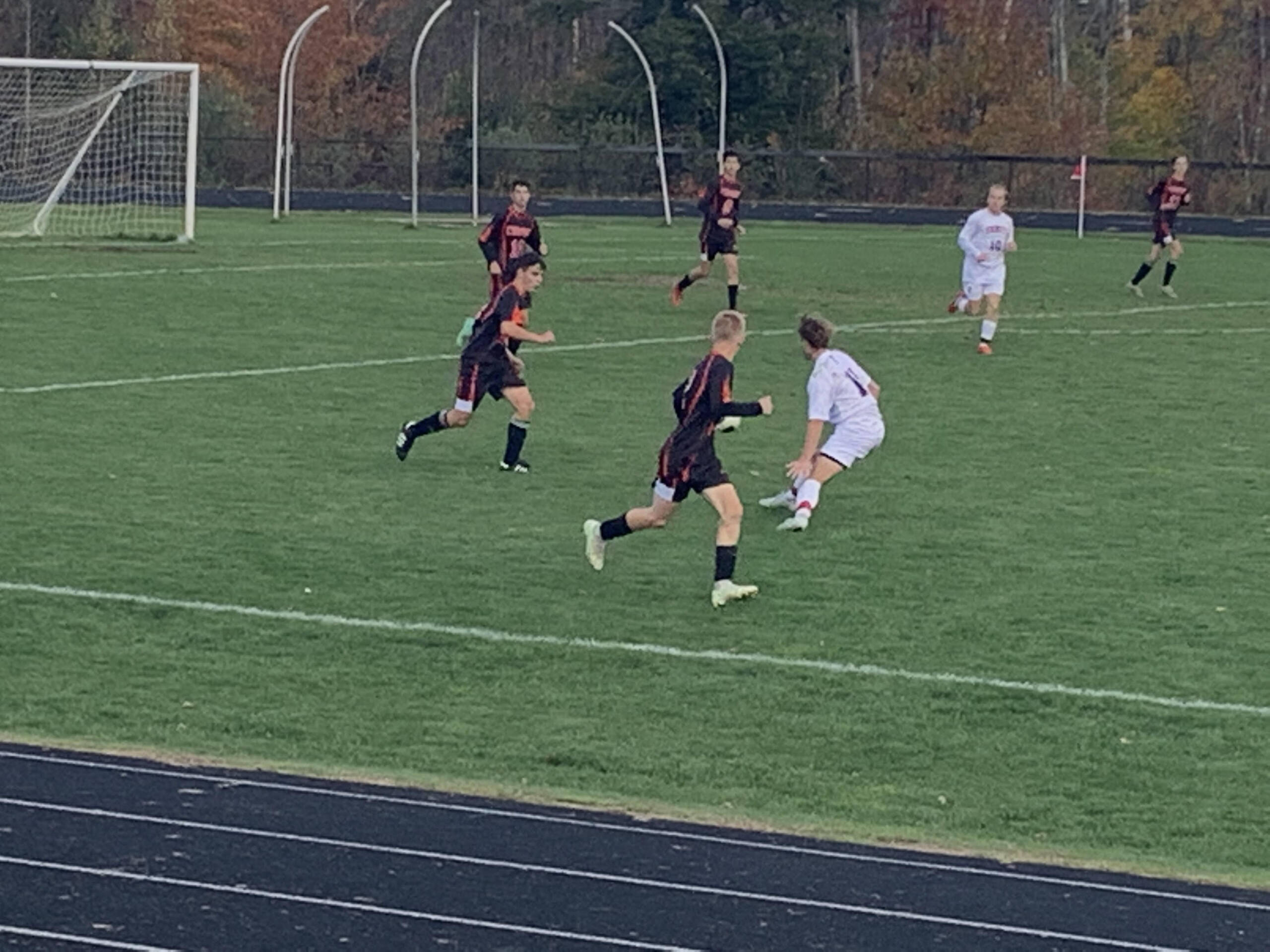 Round 4 saw the first miscue, as Trinity midfielder Conor Bosworth got under the ball and sailed his shot over the crossbar, creating an opening for the Orioles. Noah Mertzic took advantage, blasting his shot past an outstretched Reine to give 4th-seeded Conant (12-3-2) a 4-3 edge.

With the season on the line, defender Tyler Bike stepped up and calmly stroked his shot past a diving Somero, to tie things again. That left everything in the hands of Reine, who made a sensational save, leaping to his left and punching away the 5th Orioles shot to preserve the tie and force a 6th round.

To the surprise of more than a few observers, Coach Phil Tuttle’s choice to shoot in Round 6 was his keeper, Reine. While the junior may not have many chances to shoot in game action, he had a strategy for his penalty kick.

“What I think is very important is just to set yourself (to shoot at) one side, then just go for it 100 percent,” said Reine, after the game. “Don’t hesitate, just got for it.” 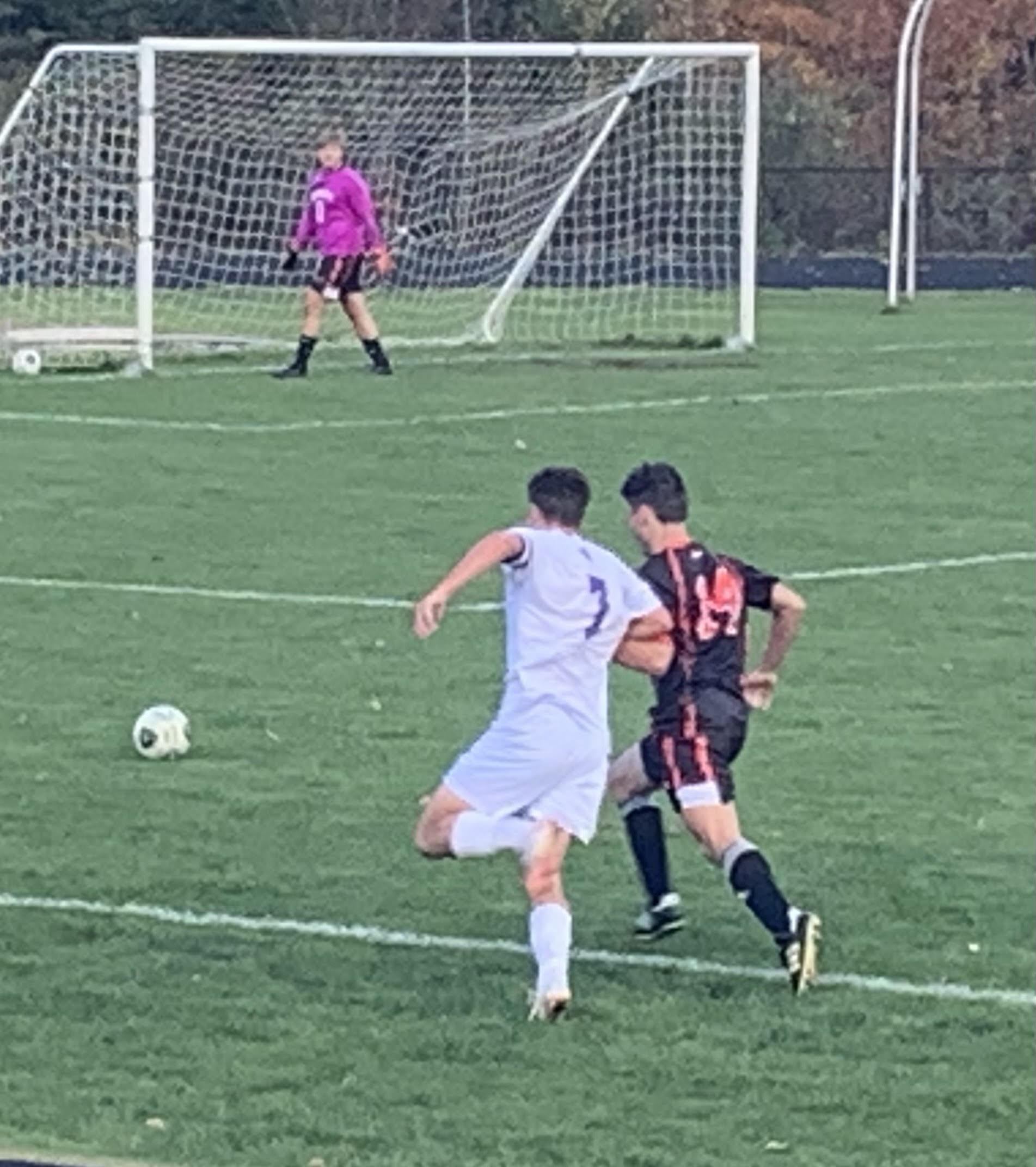 Reine stepped out and turned to face the net and Somero. He set the ball and took a couple of steps back, before purposefully striding into the ball and drilling a shot past his counterpart and into the corner of the net, giving Trinity a 5-4 advantage.

But Reine had no time to celebrate his Round 6 goal, as he had to immediately return to the net for Conant’s sixth shot. Reine steadied himself off the line and, just as Thomas Harvey struck the ball, dove to his right to make the save, keeping Trinity’s hopes alive for successfully defending their state championship.

Trinity, coming off a double-overtime win over Raymond in the opening round of the tournament, came out and dominated the first half against Conant. The Pioneers carried the play and maintained pressure but had a hard time finishing their attacks.

Trinity finally broke through in the 37th minute. Booth slipped a pass through to Shipman, who was slicing between two defenders. Shipman took the pass in stride and beat Somero cleanly for a 1-0 halftime lead.

“The way we played in that first half, I really thought we could be up 3 or 4-nothing,” said Tuttle. “Looking at the chances we had, we just couldn’t bury it. We just weren’t clicking on the final third. They stayed in and made a game of it.” 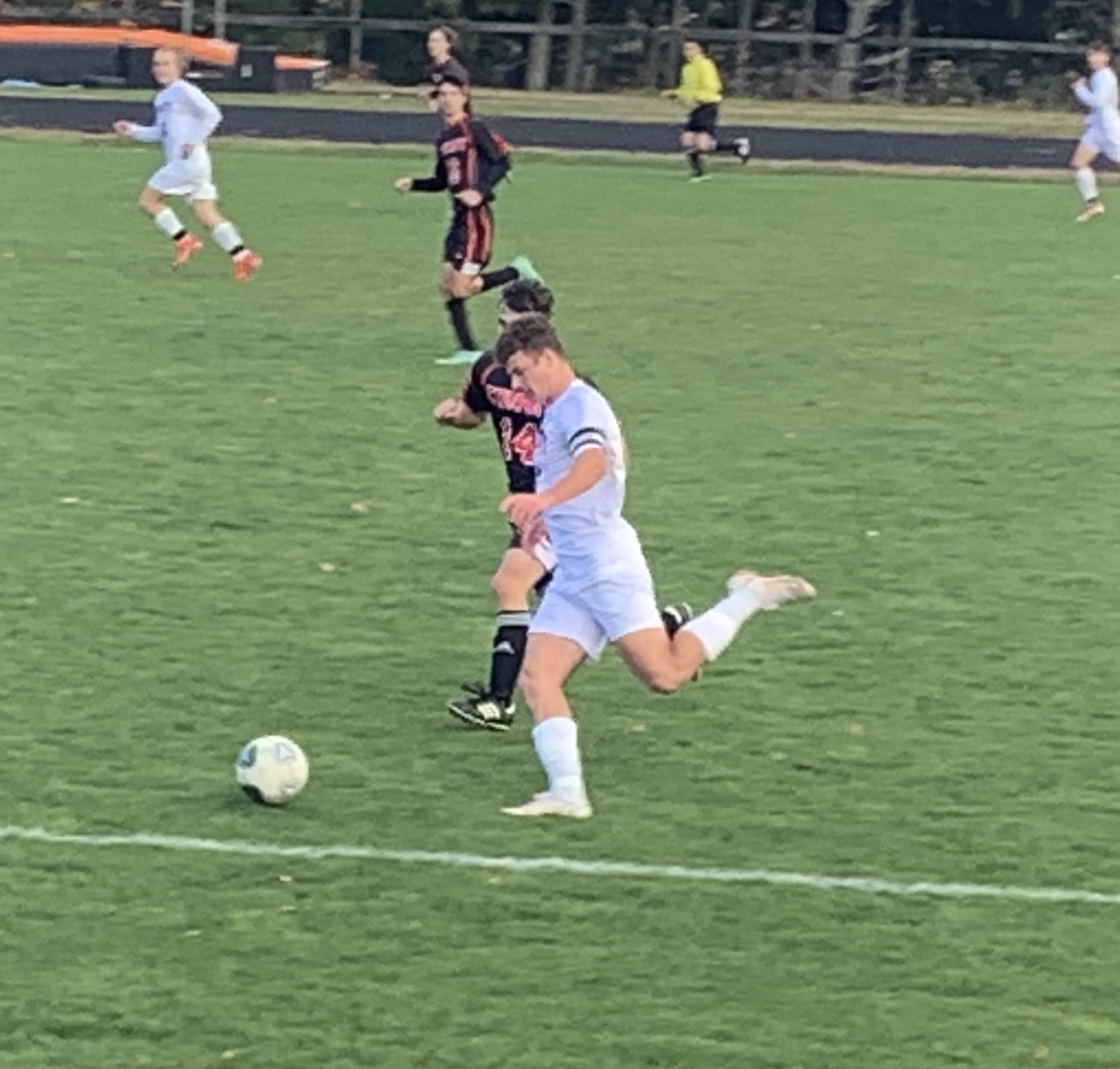 Conant came out in the second half playing with a sense of urgency it lacked in the first 40 minutes. The Orioles brought the attack to the Pioneers and kept them back on their heels. The pressure paid off when Harvey slipped behind the defense (appearing to be offside), accepted a long lead pass and beat Reine to tie the game, 1-1.

Both clubs had prime scoring chances throughout the second half, as play opened up and the match got considerably more physical. Reine (8 saves) made a couple of excellent stops, including a leaping punch save midway through the half.