In a year where the New Hampshire Fisher Cats have hovered just below .500 for most of the year, it makes sense that once again the Fisher Cats found themselves finishing a series with highs and lows roughly equal in measure.

On Thursday, Tanner Kirwer recorded the Fisher Cats’ first inside-the-park home run since Jon Berti’s on Aug. 5, 2018, with Fisher Cats Manager Cesar Martin saying that Kirwer was almost at third by the time the ball even hit the wall.

It was one of four Fisher Cat home runs this week. Ryan Gold and Demi Orimoloye also hit homers on Thursday, and Vinny Capra recorded the Fisher Cats second grand slam in as many weeks on Saturday. It was the Fisher Cats’ seventh grand slam of the year, with no other Fisher Cats team prior to 2021 hitting more than five.

This year’s edition of the Fisher Cats also have a shot of breaking the franchise record of 170 stolen bases, coming into Sunday’s contest with 132.

Both the grand slam figure and the chase for the stolen bases record begs the question just what this team would have done if they had games in April like they would during a normal season.

In contrast, the Fisher Cats’ pitching was inconsistent, ranging from the strong starts from Luis Quiñones on Tuesday and Nick Fraze on Thursday to the frustrating start from Reilly Hovis on Friday and the pair of shaky outings from Conor Law on Wednesday and Saturday.

A win on Sunday would have given the Fisher Cats just their second home series win of the season.

“At least we’re leaving tied, we wanted to win the series, but we’ll be happy with this for now,” said Martin. “It was good to see a few of the guys get in good swings.”

The Fisher Cats now welcome the Portland Sea Dogs to Manchester for the last time this season and the second to last home series this season, with the Fisher Cats heading to Reading for a six-game stretch against the Fightin’ Phils before returning home to conclude the regular season against the Harrisburg Senators.

Although the Fisher Cats are not yet officially eliminated from playoff contention, 9 ½ games behind the Bowie Bay Sox for the final Double-A Northeast playoff spot coming into Sunday’s contest.

Still, with 20 games to play, it would be a near-miracle for the Fisher Cats to see the post-season this year. That doesn’t mean it can’t happen, though according to Fisher Cats Broadcaster Bob Lipman.

“It’s just so tough to predict, because I don’t know what the other teams will be bringing to the stadium,” says Lipman. “For a lot of the Fisher Cat hitters, they’ve been improving over the season, which is what you hope in terms of development. The Fisher Cats are performing better, throwing the baseball and hitting the baseball, that could set things up nicely in the final two series at home.” 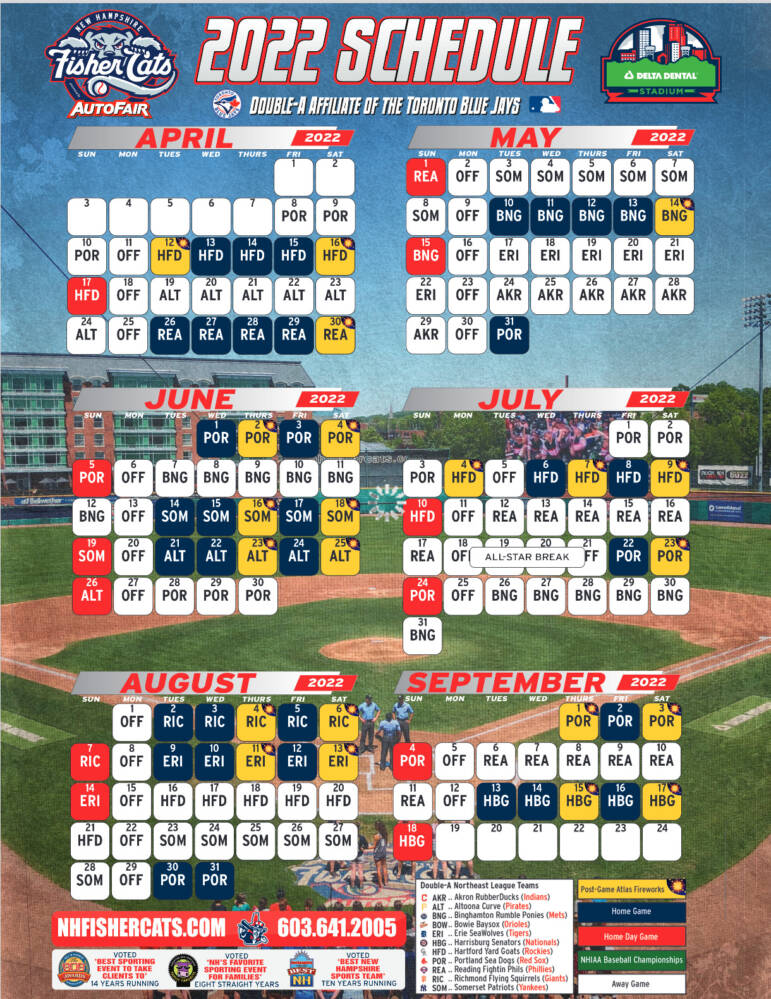 Earlier this week, the Fisher Cats announced their 2022 schedule (see above). The 138-game schedule features 60 home games, beginning with the home opener on Tuesday, April 12 and will have the same scheduling format at 2021, with six-game Tuesday to Sunday series all year excluding a Tuesday, July 5th off day to break up a home series against Hartford and a six-game home-and-home series against Portland with three games in Maine to start the year and then three games in Manchester following the All-Star Break starting on Friday, July 22.

Adrian Hernandez – Hernandez’ ERA dipped to 1.64, with three innings of work and just one man on base, enough to earn the save on Tuesday.

Graham Spraker – Spraker had probably the best series of any Fisher Cats reliever this year, even better than the series from Hernandez. In three appearances, he recorded nine outs and eight of them were strikeouts, almost earning an immaculate inning on Sunday.

Demi Orimoloye – Demi had five hits, including a double to go along with the home run on Thursday and a pair of RBI.