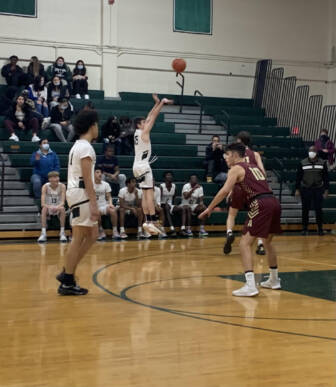 MANCHESTER — Brendan Graham showed why he is one of the top high school basketball players in New Hampshire, helping Alvirne High rally from 14-points down in the third quarter to stun Central, 59-57, Tuesday night in the Beech Street gym.

Graham, a senior center, finished with 17 points, 22 rebounds and 7 blocked shots, as Alvirne improved to 5-6 on the season. As impressive as his game totals were, Graham’s numbers in the second half were off the charts. He had 10 points, 15 rebounds, 6 blocks and a steal after intermission. 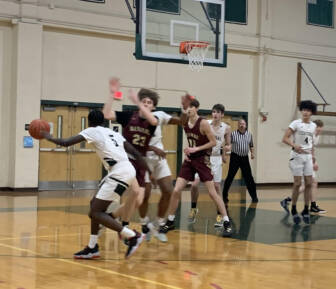 “(Graham) is a double-double machine. I think he is top seven or eight in (Division 1) in scoring and has to be top five in rebounding,” said Alvirne Coach Leo Gershgorin. “Even when he isn’t scoring, he’s giving us 15-20 rebounds a game to go with three or four blocks, as well. I think he’s averaging six blocks a game this year.” 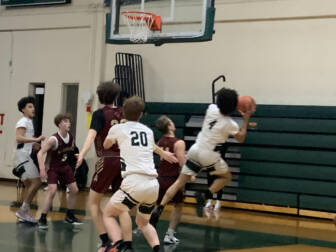 As well as Graham and Dewitt played for Alvirne, Central held the lead for much of the second half and has a plenty of opportunities to pull out the victory. But the Little Green missed several key free throws down the stretch and were just 11 of 26 (42 percent) from the charity stripe for the game.

“Yeah, it’s tough. Not much you can say about that. You have to be able to make your free throws,” said Central Coach Sudi Lett.

Central (4-5), was led by a game-high 21 points from Baylee Bates and 15 from William Gearles. Bates drained four 3-pointers, including three straight in the third quarter, as Central went on a 15-6 run to build a 49-35 lead, midway through the third quarter. 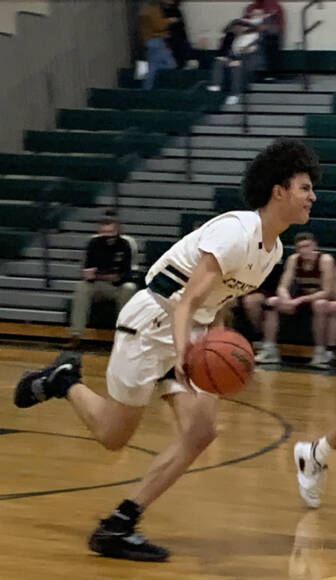 “We had a defensive strategy for (Bates) that worked pretty well in the first half but didn’t work do well in the second half,” said Gershgorin.

Central seemed firmly in control, leading 51-37, with 2:19 to play in the third quarter, when Graham began to assert himself on both ends of the floor and lit a fire under his Bronco teammates.

A little putback by Graham on the offensive glass cut the Central lead to 12 and  seemed benign at the time. But seconds later, Graham made a steal on the wing, streaked down the left side of the court and soared for a thunderous two-handed dunk that electrified the crowd and the Alvirne bench.

Suddenly, the Broncos had new energy and focus. The two plays by Graham triggered a 10-0 run by the Broncos, who closed the quarter with a blocked shot by Hall, leading to a layup by Graham off a pretty feed from Anthony Ferullo (8 points). 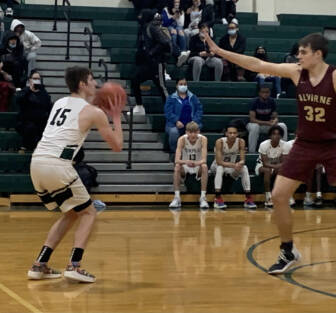 Two blocked shots by Graham to start the fourth quarter sandwiched a nifty runner down the lane by Alvirne’s Eric Allard and Central’s lead was sliced to  51-50.

Central fought hard to maintain its lead. A strong baseline drive by Bates and a 12-foot jumper by Gearles put the Little Green up, 57-54 with 4:02 to play.

On the other end of the floor, Central tightened up its defense, double-teaming Graham and trapping the Alvirne guards as soon as they crossed the halfcourt stripe.

The strategy worked to slow the Broncos’ offense but the Little Green failed to take advantage. Central converted just 2 of 10 free throw attempts in the fourth quarter, leaving the door wide open for Alvirne to complete its comeback.

And that took place with just over a minute left to play, when Hall made a sensational pass to Ferullo under the hoop for an easy layup, putting the Broncos on top for the first time since the first quarter, 58-57. 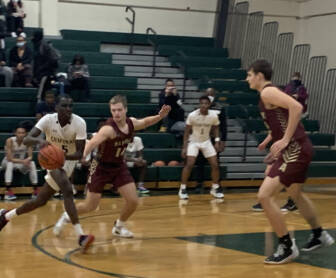 Both teams went cold from the field and the line in the final minute. A free throw by Dewitt pushed the lead to 59-57.

Central had a final chance and was able to get the ball into the hands of Bates on the left wing. With a hand in his face, Bates’ shot clanged off the front of the rim and Graham, appropriately, snagged the rebound to seal the win for the Broncos.

“We’ve been waiting for a game like this for us. We’ve lost two games on buzzer beaters,” said Gershgorin. “We’ve lost six games and four of them have been by a combined eight points. Our kids played hard. I’m really proud of them.”

“You have to give Alvirne credit. They played hard the whole game and they made the plays at the end,” said Lett. 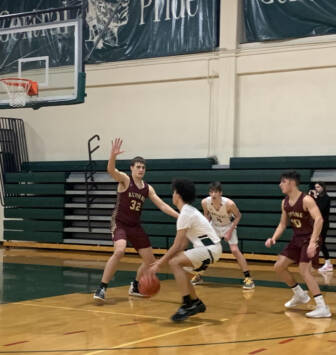