MANCHESTER, NH — New Hampshire’s opioid crisis is among the worst in the nation, with the state ranking in the top five with the highest rate of opioid-involved deaths, according to the National Institute on Drug Abuse, more than twice the average national rate by population. Over the past year, the state has rolled out a referral and treatment program, called The Doorway, with hopes of providing a single-entry-point process for people seeking addiction treatment.

More than $64.5 million in federally-funded contracts have been awarded since October 2018 to create the system. But how is it being used by patients who walk through its doors every day? We spoke with recovery community members to learn what changes, if any, they’ve seen over the past year in their experiences with finding and receiving opioid addiction recovery services.

The beginning of recovery

“The Doorway is the entrance into recovery,” says Jason Barrows, one of six recovery community members, all Manchester residents, we spoke with on a recent visit to the Hope for New Hampshire Recovery center in downtown Manchester. “They get you into treatment, and really it’s up to you after that to continue with it. You have to put in the work.”

The Doorway works under a “hub-and-spoke” model, wherein “hubs” assess patient needs and refer them to “spokes” for treatment as needed. In Manchester, the hub is Granite Pathways, a place from which all six interviewees had done intake assessment, many of them multiple times as a result of relapses.


“In my experience, they helped me get into residential treatment, or into sober living,” Barrows continued. “But as far as continued recovery—meetings or whatever you’re going to do—that’s up to you.” 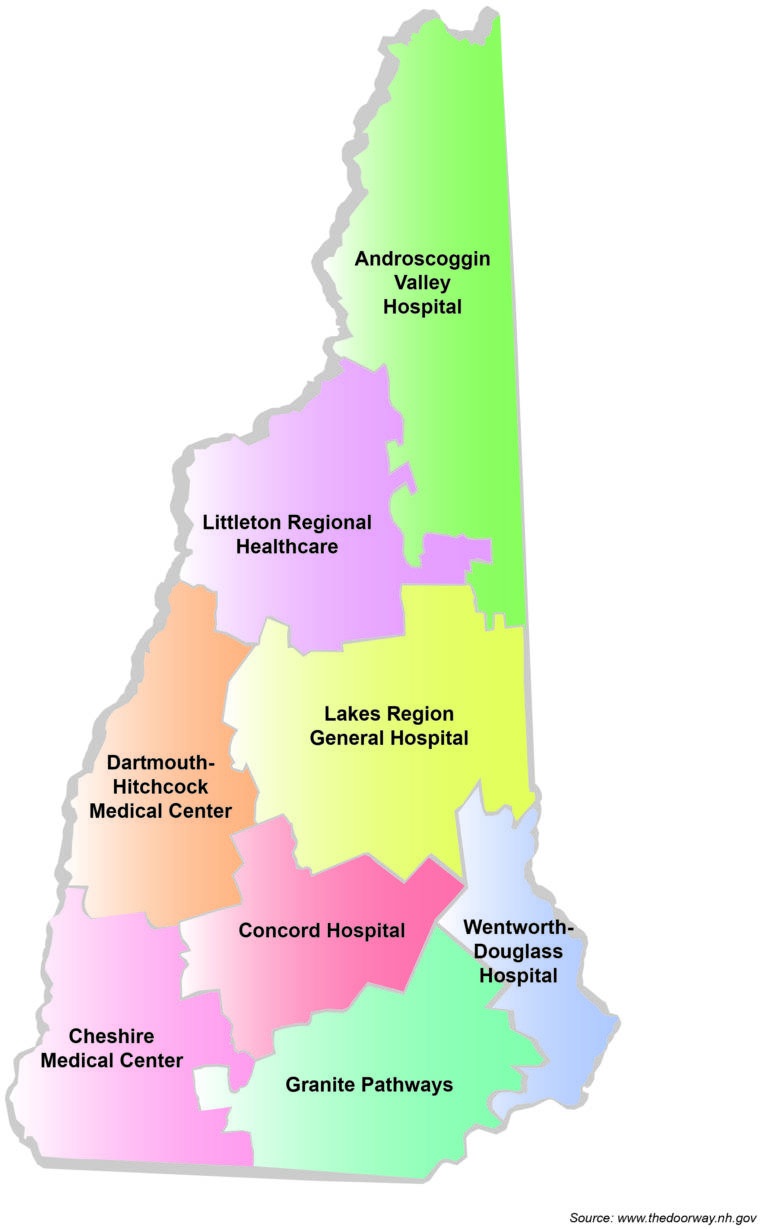 Hope for New Hampshire Recovery is one of the “spokes” in the Doorway hub-and-spoke model where that continued treatment happens. On a Thursday morning, the recovery community center was full of energy, with staffers welcoming each individual and directing them as needed. Colorful art covered the walls and an affirmation wall, covered with hundreds of sticky notes, greeted visitors, who are all encouraged to take an affirmation and add their own.

Many of those at the Hope center in recovery—attending peer-support meetings, signing up for art classes, or just socializing in the common area—had been referred to the center through a Doorway “hub.” Across the state, there are nine hubs which offer walk-in assessments and referrals for treatment at “spokes,” like Hope for New Hampshire Recovery. The six members of the Hope for New Hampshire Recovery community we spoke with had all been referred through the Manchester hub—Granite Pathways.

The referrals and treatment process

The need for persistence was a common thread among interviewees. Stated plainly, interviewee Anthony Simms added: “You have to want it.”

Others shared that while the Doorway had got them into treatment, they “don’t follow up.” For the majority of those we spoke with, the process of recovery was strongly self-driven, though if they had the drive, recovery resources could be found.

All but one interviewee, who preferred to remain anonymous, agreed. She says over the past five months, she’s seen a system of greater involvement among treatment centers: “Even back in the past, they would call me when I was in rehab, asking if I stayed and how I was doing,” she says. But now, the intake process has become even more personal and sophisticated she explains:

“[Granite Pathways] has drastically changed. They helped me with the sober house. Before you used to meet with one recovery coach and one not-even-LADC [Licensed Alcohol and Drug Counselor], but a counselor… So, they had two people working in this office, and there’s only so much they can do.”

In some instances, those two recovery center employees could be tasked with assessing a dozen or more people waiting for treatment, said Simms, who had participated in the described process.

“Now, you meet with two recovery coaches, a LADC, and a case manager,” the woman explained. “That’s a huge difference. How I see Granite Pathways now, you go in there, and they get to know your whole history. The LADC assesses your treatment, and the case manager’s job is to help you with all of those resources.”

Resources, she explained, could include treatment, a referral to sober living, or even money to help cover sober living. She had also received a list of providers from her case manager for mental health providers to pick up former treatment she had stopped.

Other interviewees seemed astounded by the woman’s experience. They, all men, had not seen as careful attention in their own assessments and referrals.

More than anything, the recovery community members we spoke with saw the Doorway as a place to turn for help, not a guaranteed solution for their addiction recovery. More than anything, wait times for treatment played the biggest factor in whether these individuals stuck it out or walked right back out of the doorway they had just entered.

“[I came in] two or three months ago. I wanted to get into rehab, so a friend referred me [to Granite Pathways for an assessment],” said interviewee Adam Dube. “I left three times, because it was just taking forever. They had me waiting there. But, that was just me—patience really isn’t a virtue when you’re in that situation.”

Each time, Dube said paperwork and processing had been at least an hour up until the point he walked out. An hour seemed to be the agreed-upon processing time among the interviewees.

Patience, yes, is required for any difficult journey, but what is the limit when it comes to recovering from opioid addiction in a state actively working against the crisis?

It should be noted that two interviewees shared that they experienced expedited assistance when they came in through Manchester’s “Safe Station.” Launched in May 2016, solely in Manchester, the Safe Station program provides around-the-clock medical assistance at each Manchester firehouse. Firefighters provide medical assessments or referrals 24/7, including when Doorway hubs are closed. In its first three years, the program saw more than 5,000 visits, with all 10 firehouses in Manchester participating. As of July 2016, the town of Auburn also launched its own Safe Station program, while Nashua fire stations followed suit in November 2016. Meanwhile, other communities around the state offer other models—in Concord, the NH Project FIRST program enlists emergency response teams to provide support and resources. Other local models, too, can be found in Berlin, Dover, Keene, Laconia, and Portsmouth.


While the Doorway web portal focuses heavily on directing those who need help to call 2-1-1 to be connected to a hub (or “Doorway”), all of the members I spoke with had found there way into the center by simply showing up at Granite Pathways or visiting a Safe Station after-hours when they needed help. Of course, these were individuals who I met actively in recovery—the experience could be different for those who may be less aware of the hub and Safe Station locations.

Nothing greater than compassion

Those recovering from addiction are in search of compassion. There’s nothing more harmful than having someone treat you with disrespect when you’re reaching out for help.

What seems to be improving through the Doorway program is the infrastructure for getting patients into recovery—hubs are not only known in the recovery community, but some say the intake process and even the physical spaces have seen gains in the past year. What may be an area of development is a united sense of compassion among treatment providers.

“Some of the [Granite Pathways] staff understands what we go through,” says Zamban. “But if you’re not an addict, they don’t understand mentally what we go through. I’ve seen people come in totally [expletive] up, and people are laughing in their face about it. Some of them—not all of them—treat you as ‘once an addict, always an addict.’ We have to change that concept.”

“As soon as they know you’re there for some junky [expletive], you’re a second-class citizen,” Dube adds. “Since they’re in the medical field themselves, you’d think that if anyone is going to understand, they would get it.”

Similarly, interviewees also said spokes are seeing improvements, too. At the Hope center, the welcoming atmosphere and expanding programming were of particular note.

“This wasn’t this before,” Simms said, gesturing around the room and out into the hallway. “I remember when this [part of the Hope center] was in construction,” says Simms. “We had to walk through [the side] door—couldn’t even go through the front door. There was [only] a meeting a day. This [center and its programming] has improved, and I think [Granite Pathways] is improving at a pretty steady pace, too. They have a lot of improvement to do, but I think they are improving.”

This story was produced by The Granite State News Collaborative as part of its Granite Solutions reporting project. For more information visit www.collaborativenh.org. Follow us on Twitter @NewsGranite and like us on facebook @collaborativenh.