If you have ever watched the Albert Lamorisse 1956 Academy Award-winning internationally acclaimed film, “The Red Balloon,” the moment the title is mentioned, you cannot help but smile.

“The Red Balloon” won a 1956 Cannes Grand Prix, an Academy Award Oscar and at least six other prizes in Tokyo, Mexico, London and elsewhere.

A young boy befriends a balloon and their improbable relationship is chronicled. As mundane or odd as the plot may seem, the 34-minute film by Lamorisse is a simplistic, artistic masterpiece. I decline to dissect the plot, merely because this film is absolutely worth every moment of discovery.

Oftentimes, a film you have viewed as a child and then again as an adult, its mystique dissipates. Not so with “The Red Balloon.” It’s fantasy endures and its appeal is charmingly universal.

I saw “The Red Balloon” for the first time in the third grade when reel-to-reel was required to watch a film. I never forgot it, as I am sure most have not, and when I came across it’s on YouTube a few years ago it’s magical appeal remained.

It’s an uncomplicated story full of captivating cinematography, filmed as if Lamorisse naturally strolled, impromptu, along the streets of a decayed Paris quartier. Quite the contrary. It is said that Lamorisse was painstaking in his illusionary perfection. He utilizes the bright red balloon against the contrasting stark backgrounds, animating an inanimate object to the point of convincing belief. As stated in Woody Allen’s film, Midnight in Paris, … there is something mystically magical of “Paris in the rain,” it’s no wonder why artists like Brassai and countless others were infatuated with its beauty –  and this actuality is not lost on Lamorisse, as he captures the historic streets, misted, with an extra touch of romance, in unexpected exquisite beauty.

Lamorisse used his own children in the film: His 5-year-old son, Pascal, as the main character, and his daughter, Sabine, as the young girl with the blue balloon.

Undetectable thin wires were used to create the convincing illusion of a spirited balloon.  In the final shot where the main character flies above Paris, Lamorisse and his team invented Helivision, a process where a camera is rigged on a shock-absorbing frame inside of a helicopter, resulting in a fluid seamless scene.

There are no computer-generated images, and no robots destroying the earth. There is no violence, or sexually-explicit scenes (there is an amusing minor flirtation). No sets and practically no dialogue. All of the most traditional ingredients required for a cinematic monument were left unused. Instead, there was an enchanting innocence, an endearing extrapolation of art, that, within itself, made all the difference.

The finale is purely magical … Willy Wonka and the Chocolate Factory magical (the original, not the remake). Once again, Lamorisse contrasts multicolored balloons against the grey backdrop of the Paris rooftops, accompanied by emotion-tugging orchestrations, in turn, allowing you to soar, as well.

An unforgettable film, “The Red Balloon” indelibly imprints itself on the observer’s psyche. Let me – and just about anyone else who has seen this picture – assure you: You won’t walk away liking the film, you walk away loving it.

If you haven’t seen it, watch it. 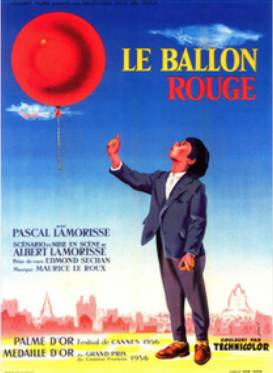 If you have seen it, relive it. It is absolutely everything you remember.

There will be plenty of dreary days this Spring vacation week. Give the kids an alternative as opposed to instant technological gratification. Convince them to let go of their Androids, Smartphones and iPads for 34 minutes of their lives. Perhaps coaxing them with a favorite snack or lunch will allow you to share valuable time together, watching “The Red Balloon.” They won’t want to leave until the end, and neither will you.

And after you watch “The Red Balloon,” come back and tell us what you (and your kids) thought in the comments section below.