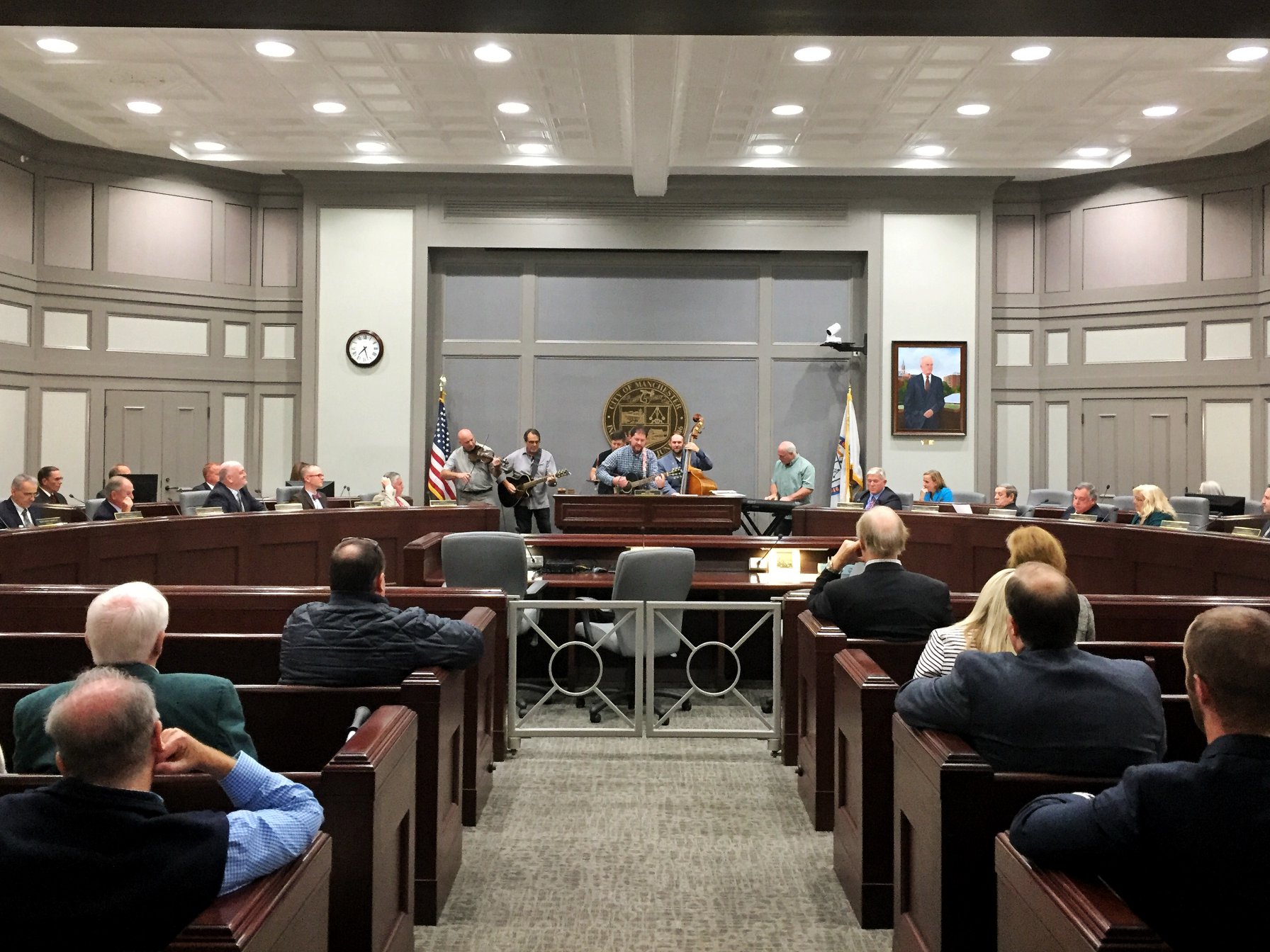 [Scroll down for the full recorded version of the song].

MANCHESTER, NH – Jimmy Lehoux is a hard-working guy. He’s also a country music singer with a New England twang and a band to gig with. He’s got a couple of kids, a lovely wife, and a can-do attitude. He successfully ran for a seat on the city school committee after feeling some frustration as a parent; he wanted to see if he could make a difference. As part of his personal and professional journey to be a better citizen, he participated in the annual Leadership Greater Manchester class run by the Greater Manchester Chamber of Commerce.

In summary, it is all of the above that inspired Lehoux to pen a song celebrating his hometown, appropriately titled “My Home Town (MHT).

The song was officially launched during this week’s Board of Aldermen meeting. Lehoux and his bandmates assembled behind the aldermanic horseshoe Tuesday night and serenaded the city like nobody’s business.

The lyrics reflect the things Lehoux has experienced, and the things he’s learned:

35 square miles I call my home / There’s a river running north to south with a thousand years of stones / To the east there’s a dead end road, people walking by / It was an old textile mill town built by the falls / Where you can still believe that hard work conquers all / She’s grown with the changes all through the years / And with the pride of her people she forged on without fear.

The song bubbled up from a challenge posed toward the end of the Leadership class, Lehoux says.

“I was given a challenge to write a song about my experience and I started thinking, ‘what do you write about your hometown – how great it is?” he says.

“Then I started thinking of some of the classes we had over the year –  the history class with John Clayton was one of my favorites. I went back to that in my notes, and I’d written something about coming up from the ashes. We had actually watched an old video by that name, a 1930s documentary. And so I took that information – and with the help of Wikipedia – I started writing things down that I love about Manchester.”

He thought about the kinds of things people who aren’t from here should know about his hometown.

“Especially with all the negative press these days, I wanted to focus on the positive things and it just progressed from there. The song tells the listener about who we are, and basically where the city’s going with all our positive energy in the technology field, especially. But that we’re also steeped in history,” says Lehoux. “With everything going on, the future is right now.”

That’s the short version of the lyric that deposited a sentimental lump in my throat:

“The children will one day lead her on / And the old will tell the queen city stories / Of how she came up from the ashes long ago / By those who could see and those who still believe in her glory / Welcome to my hometown / Where history runs deep but the future is now / She is one proud place to me and in my heart she’ll always be / My home town.

After getting a standing ovation for his project during the Leadership class graduation, Lehoux was approached by Chamber President Michael Skelton, who asked if there were a way to record the song.

Easy question for a guy with a band.

With a bunch of volunteer time, talent and resources from musicians and sound engineers, the song was professionally recorded. Lehoux and his band even added the song to the playlist for the August 16 Intown Manchester summer concert at Veterans Park.

That’s where Mayor Joyce Craig heard it, and loved it. When she found out the back story, and that it had been recorded, she asked Lehoux for a favor.

“She asked if her office could be the first to release the song, and out of respect for the office of the mayor, we all agreed,” Lehoux says. “When recording it we agreed it was strictly a labor of love, and we knew we’d donate the song to the city for however they wanted to use it, for promotional pieces or a video – whatever. We wouldn’t chase royalties or anything like that.”

Yea, Lehoux has already envisioned a video version of his song.

“I can see groups of different people from all parts of the city – organizations and businesses, young and old, from all walks of life – whoever they are, during the chorus you’d have all these people holding signs saying this is our hometown,” he says.

So, if anybody’s got the time and interest, there may be a room to grow this song into something even more inclusive.

I asked the Mayor about bringing a band in to kick-off Tuesday’s meeting.

“I’m glad we were able to have the Jimmy Lehoux Band to play their song, ‘My Hometown,’ at the beginning of Board of Mayor and Aldermen meeting this week. We all have pride for the Queen City and show it in many different ways, so it’s great to see Jimmy’s hometown pride in song!”

Her words made me think that perhaps it’s time to ask a favor of the rest of the city – see how many cool tributes to our Queen City we can muster.

In this case, all somebody had to do was ask Lehoux to put pen to paper. It could be that simple to inspire an entire community to come up with a Manchester-centric marketing campaign.

That would be cool.

Lehoux is just hoping the song speaks to people’s hearts, whether they’re country music fans, or just love Manchester as much as he does.

“If you look at it, we’re in a snapshot of history right now. In the bridge of the song it says, ‘the children will one day lead her on…,” and I look back at the ‘80s when Elm street was virtually closed, that was the time I grew up during, and what I remember now is how it felt to come out of those ashes. We’re moving in a great direction, with Dean Kamen and Dyn and all these companies coming here to put Manchester on the map,” Lehoux says.

“So when you hear things like someone calling us a ‘drug den,’ those are the things that don’t help. That’s when we have to say ‘time out, and do something to show who we really are,” Lehoux says. “History, I think, will be kind to us in 30-40 years when telling our story. Hopefully people will like the song, and step up and believe in the city.”

You can listen to the song below.