This Italianate residence, complete with carriage barn, stands at 269 Hanover Street in Manchester, a heavily travelled thoroughfare leading into and out of the city. Built in 1850, it survived entirely intact into the 1980s, thanks to ownership by a single family. Jim Garvin, while on staff at the NH Division of Historical Resources, described it as “one of New Hampshire’s least altered and most typical vernacular Italianate dwellings.” Christine Fonda, Jim’s colleague, was more succinct: “It looks exactly like its baby pictures.” 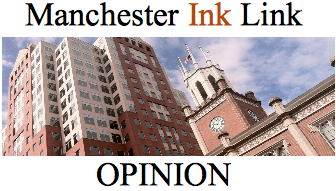 But since passing out of the Lassonde family, the house has fallen on hard times. Its bronze plaque signifying placement on the National Register of Historic Places has been replaced by a big red “X” indicating its current status as an abandoned building. One owner made it the headquarters of an accounting firm, proudly telling a neighbor about selling the chandeliers to afford vinyl replacement windows. Then it was divided into three apartments, and the trees and gardens were replaced by asphalt. The original cast iron fence and Greek-Revival tool shed are gone. The carriage house is covered in graffiti. A series of banks and mortgage companies have held title, caring little about its fate, and the house has been vacant for about 5 years.

A few months ago, when Bronstein Park – across the street—was making headlines for drug-related activity, homeless people were sleeping in the house, and pundits predicted it would soon burn down or be demolished. Instead, the city took action to board it up and make it secure, but its vulnerability is still palpable.

The mayor of Manchester, to his great credit, recognizes this vulnerability. He seems to want to capitalize on the high visibility and historical importance of this house, the home of one of his predecessors, Mayor James W. Hill. He wants to make an example of this house in an effort to force delinquent property owners to repair or demolish abandoned buildings.

Officials have had no success in contacting the owner — Mid First Bank in Oklahoma, although they pay the property taxes and have responded when asked, in writing, to mow the lawn or fix broken windows. It is hoped that Seven to Save listing will remind the community of this architectural gem, and call attention to similar problems of foreclosure and urban dis-investment.

The houses surrounding Manchester’s beautiful urban parks should be cherished as among the best in town; we need to all work together to turn forgotten gems like the Hill Lassonde House into opportunities — a business, restaurant, or some other use that can be a plus for the entire community.

Michael Duffy II arrived in Manchester in 1979 as a student at Saint Anselm College. He fell in love with Manchester as a college intern with Mrs. Lessard at the MHA. He’s worked in and around historic buildings ever since and has been on the crew of a famous restoration contractor in Portsmouth as well as work done on his own. He has served as sexton at Grace Episcopal Church, doing maintenance and restoration work in all their buildings. Lately, he works on his own projects, a collection of houses he owns with his husband Stephen around Wilson Hill. He serves on the Manchester Heritage Commission, the historic preservation committee at the MHA and the property committee at Grace Church.