MANCHESTER, NH – For decades, Charleen Salazar scrimped and saved her money to build her dream home, a gambrel-style residence, one she designed herself.

Salazar, a retired registered nurse who served 16 years with the U.S. Army Reserves, bought two acres of land for $52,000 in Deering where it was to be built.  She interviewed contractors, settling in 2016 on Taschereau Investment Properties (TIP), a limited liability company owned by Paul Taschereau of Litchfield.

She hired an architect and had plans drawn up from her design.

She’s called several lawyers who told her they would take her case but they need a retainer, anywhere from $10,000 to $15,000, she said, money she doesn’t have.

Salazar, whose makes due on Social Security Disability Income, was afraid to ever ask Taschereau about her money, even when he kept putting her off about when the construction was to start.

She said he did about $5,000 to $10,000 worth of site work readying the property for the foundation.  Every time she called him, however, he had some excuse as to why the foundation couldn’t be put in, mainly because of the weather: it snowed, it rained, etc.

Deep down, she said, she knew her money was gone but she didn’t want to believe it.

Had Salazar had a computer, she would have been able to google TIP and quickly find a number of people complaining about his work.

Since 2004, he or his company is listed in 54 court cases, six of which he initiated, according to Tammy L. Jackson in the communications office at the New Hampshire Supreme Court.

Many were filed by contractors who said they were owed money for services or work performed.  Others were filed by homeowners complaining about the need for work to be completed on their homes or to be redone because it was not done properly.

From 2017 to 2019, eight people filed complaints against TIP with the New Hampshire Attorney General’s Office, Consumer Protection Division.  Seven of them are closed, because they were referred to a private attorney, resulted in small claims being filed or money was saved or recovered.

Senior Assistant NH Attorney General Brandon H. Garod, chief of the division, said most of the complaints concerned breach of contract or were about the quality of work done.

When his office receives multiple complaints about the same company or individual he said they do a “deep dive” investigation.  However, the complaints against Tashereau are all civil matters, not ones concerning unfair or deceptive practices, he said.

The one case that is open will be closed, he said, because they “received word that Mr. Taschereau passed away.”

The reality of her situation finally sunk in for Salazar in December.

She had last communicated with Tashereau, the sole owner of the company, via text in November 2020.  She finally had obtained a smartphone because someone told her since he was avoiding her calls, he might just return texts.  He did. 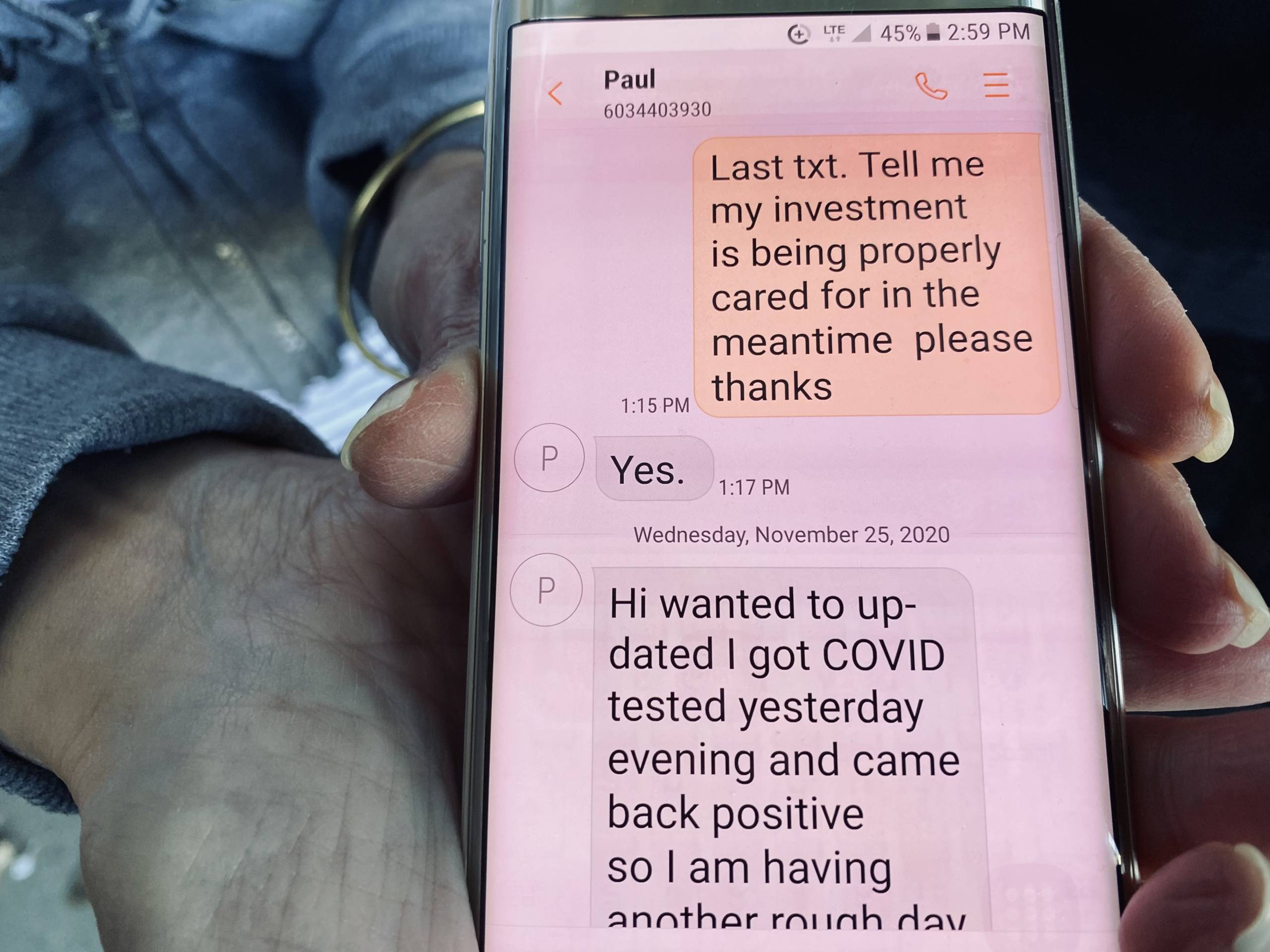 In one text, he told her he wasn’t feeling well and had to go lie down.

On Nov. 25, 2020, the last time they communicated, Salazar texted Tashereau:

“Tell me my investment is being properly cared for in the meantime please thanks.”

“Hi wanted to updated (CQ).  I got COVID tested yesterday evening and came back positive so I am having another rough day.”

On Dec. 14, Salazar said she called him again and the woman who answered the phone told her he had died.  When, Salazar asked.

“Three hours ago,” was the answer.

Salazar couldn’t believe it.  Three months later, she still finds it hard to fathom.  When he died, so did her dream home and the hope of ever recovering her $210,000.

Salazar lives alone, has no family and drives a 20-year-old car.

She owns her home, however, and says she is thinking of selling it and the Deering property.  With that money, she could buy a new, smaller home that is already built.  Of course, it won’t be anything like her dream home.

Or, she said, she could sell the Deering property, buy another piece of land and build a downsized version of her dream home.

Things are looking up.  “I’m preparing myself to move on,” she says.

A GoFundMe site, set up by Evan Parenteau, has been started to help her recoup some of that $210,000.   As of Wednesday afternoon, no one has contributed anything.