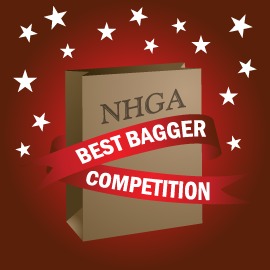 MANCHESTER, NH – On Sept. 24 local grocery store baggers will compete for the title of NH’s Best Bagger, and a chance to win $10,000!

The annual competition is designed to celebrate careers in the food industry but also promote the NH Food Bank, which provides food to the state’s food pantries, an essential service to those who are struggling to make ends meet.

Most of all, the competition shines a light on local neighborhood baggers who have qualified for this state leg of the national competition. Contestants will bag identical grocery orders consisting of no more than 40 commonly purchased items. Each contestant is then evaluated on speed, technique, style and attitude. The four baggers who score the most points in the preliminary heats will then compete against each other in the championship to earn cash prizes, which will take place in San Diego in February 2020.

In 1987, the National Grocers Association held the first Best Bagger Championship in Dallas, Texas. Since then NGA has been bringing the country’s finest baggers together to determine who is the “best of the best”. This contest promotes exceptional customer service through superior bagging.

Bagging has been an important step for many supermarket employees who have pursued long and rewarding careers in the grocery industry. Like so many “gateway jobs,” bagger positions often face high turnover. The bagging contest highlights the rewards of this position, and seeks to limit that turnover while demonstrating the value of baggers to customer service.

The contestants will use three reusable bags during the preliminary and final rounds. Contestants must fulfill contest criteria to attain high scores, and thus are really bagging against themselves for points, not against each other.

The New Hampshire champion receives paid airfare and hotel accommodations to the NGA Show – National Best Bagger Contest, which is held in San Diego at the National Grocers Association Convention in February. The winner of the national competition receives a grand prize of $10,000. The second-place winner is awarded $5,000 while the third, fourth and fifth place finishers all earn $1,000 each.