On election day, New Hampshire ballots will include two measures to amend the state constitution:

Each measure must be approved by two-thirds of those voting in order to become part of the constitution.

Question 1, CACR 15, would allow the public to sue against state spending in violation of the law 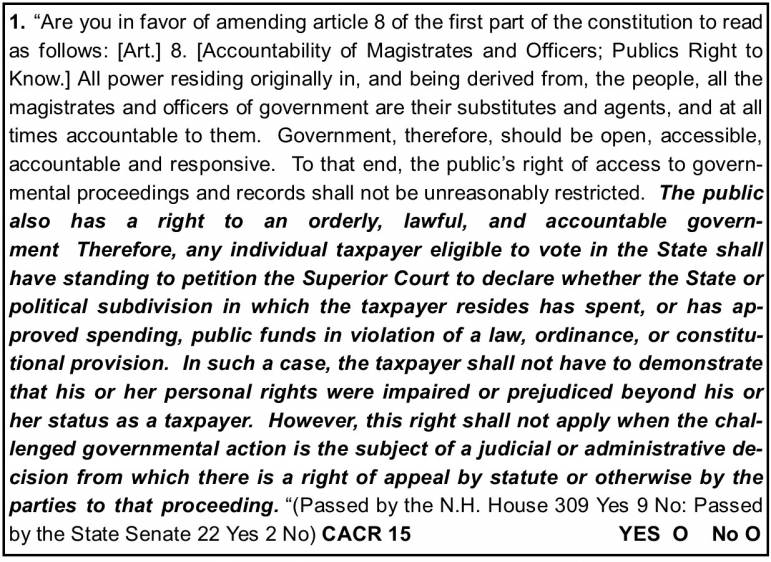 Manchester Representative Bob Backus (D-12) wrote, “I’m 100 percent on board. NH had a 150 year tradition of allowing taxpayers to have standing to ask a NH court to hear their claim that the government, state or municipal, were spending their tax dollars illegally. The NH Supreme Court took this long-established right away in the Duncan case on school vouchers in a case where Bill Duncan had prevailed in the Superior Court. As a result today it’s hard to see how anyone can challenge this, in my opinion, blatantly unconstitutional, diversion of tax to private, including religious, schools.”

Representative Paul Berch (D-Westmoreland) wrote, “This Constitutional Amendment restores to the taxpayers of our State the legal ability to bring certain lawsuits relating to the spending of public funds by the State or the political subdivision in which the taxpayer resides. In doing so, our taxpayers will have broader access to our Courts and greater ability to ensure governmental accountability. As the NH Supreme Court noted several decades ago, every taxpayer has a vital interest in proper government, regardless of whether his or her purse is specifically affected. Until relatively recently, the NH Supreme Court recognized taxpayer ‘standing’. This Amendment will assure that this important taxpayer right will continue to be recognized and enforced.”

While Manchester Representative Tim Smith (D-10) did not take a position on the amendment, he cautioned in a Manchester Ink Link opinion piece,

“This language would also open up the state government to a potential flood of frivolous lawsuits (similarly to the amendment on personal privacy, doubly so if both of them are ratified) all of which would be underwritten by the taxpayers.  […] Even cases which are dismissed can still end up costing the state significant amounts of money to litigate (the amount of your money the state government already spends on litigation every year would shock you), and a number of people in the legislature expressed concern about this potential consequence even though they supported the amendment generally.”

In response to such concerns, Berch wrote, “There are significant limitations in the kinds of suits that can be brought. The Judicial Branch did not indicate it would have any difficulty handling potentially frivolous suits; requests for declaratory relief can be expeditiously handled by the Courts.’

“A core reason for me is the increased funding of non-public schooling in NH through the use, directly or indirectly, of public taxpayer money. In the Duncan case, the NH Supreme Court held that taxpayers did not have standing to sue to determine whether this funding violates the state Constitution. This CACR would overturn the Duncan decision.’

Manchester Senators Donna Soucy (D-18) and Lou D’Allesandro (D-20) voted against this measure. Despite repeated attempts to get her comments, Soucy has not replied. D’Allessandro said, “I think the amendment is not needed.”

Question 2, CACR 16 assures the right to privacy from the government

The bill named CACR 16 was introduced in the House on January 3, sponsored by Representatives Neal Kurk (R-Weare) and Renny Cushing (D-Hampton). It received an Ought to Pass vote in the House on February 22 with the necessary three-fifths vote. It then passed to the Senate where it received an Ought to Pass vote on May 15 with the necessary three-fifths vote (235-96). Fifteen Yea votes were cast by the Senate (14 Republicans and 1 Democrat, Martha Fuller Clark of Portsmouth). Nine Nay votes were cast by Democrats including Manchester Senators Kevin Cavanaugh, Lou D’Allesandro, and Donna Soucy.

Representative Neal Kurk (R-Weare) explained CACR 16, “This updates our Fourth Amendment right to be free “… from unreasonable searches and seizures …” for the information age. It protects personal information from government snooping regardless of where or how it is found.’

“Under the Fourth Amendment to the US constitution, and the similar Part 1, Article 19 of the NH Constitution, our “person, houses, papers and effects” are protected against warrantless searches. In a world without email, video, cell phones, DNA and databases all private information was physical; it was letters, diaries and other papers and objects. In order to get at them government agents would have to go to where they were, find them and seize them.’

“Today, personal information can also be found in the cloud. It can be copied, not seized. Bits of your DNA, which identify you, can be found on your fork after you finish a meal at a restaurant.  Government ought to demonstrate probable cause of a crime to collect such information just as they do when they want to read private letters. ‘

“The U.S. Supreme Court has established a two-part test to determine whether personal information can be seized by the government. First, the individual must demonstrate an expectation of privacy, i.e. do something, like closing a door, to show that privacy is desired, and second the expectation of privacy must be reasonable.’

“Unfortunately, courts and ordinary people don’t think the same things are reasonable. Most people would think that they haven’t surrendered their DNA by dining out and they haven’t made their personal thoughts public by sending texts and emails. Courts think those things are not private. Texts and emails are not encrypted, so anyone with the right equipment can read them. Similarly, you didn’t take that fork to the bathroom and wash it.’

“We need this amendment so that ordinary people’s expectation of privacy is the norm, not the exception.”

Smith cautioned, “The language would grant a right to privacy from government intrusion, but not from private intrusion. You’d have a right against a violation by the state government, for example, publishing your private information on the Internet (or whatever) but no protection at all against a creepy stalker doing the same or against a company selling it to marketing firms. Statutory protections against that sort of thing might come or go, as the whims of the state legislature change, but constitutionally you’d have no right to that privacy.”

“For example, the constitutional provision protecting individuals from unreasonable searches and seizure – Part I, Article 19 of the NH Constitution – explicitly protect individuals only from governmental intrusion.  New Hampshire’s founders were aware of the unparalleled power of state government to imprison or even execute its citizens.  As a result, in 1784—five years before the United States Constitution was even established—they provided in the New Hampshire Constitution a Bill of Rights for those accused of crimes as a necessary safeguard against government abuse just like other rights conferred by our founders – freedom of the press, freedom of speech, the right to bear arms, etc. The founders conceived the NH Bill of Rights to rein in the power of the government, not to rein in the power of other individuals or entities as to each other.’

“The threats posed by large commercial and industrial enterprises to our personal and private information are substantial, to say the least.  The legislature can craft appropriate solutions to those concerns without using the New Hampshire Constitution inappropriately to do so.  In fact, a number of legislators are already acting to develop broad legislation to address intrusions by private entities.”

Smith wrote about a second concern, that “It  might end up opening the state government to a flood of lawsuits (at varying levels of frivolity or legitimacy) from people who don’t want the government to know how much money they make (their income being “personal information”) but still want to receive some government service which is means-tested against personal income. Or a driver challenging that the DMV has no right to know if they wear corrective lenses.’’

Smith added that the amendment, “might have implications during criminal investigations and it is unknown how the courts would interpret this wording in conjunction with the 4th amendment of the US Constitution in relation to the discovery process during a trial. Does the state have standing to violate your constitutional right to privacy if you are under investigation for a speeding ticket? How about under investigation for robbing a bank?”

Scherr responded, “Yes, there will be a temporary flood of lawsuits by those who believe that Q2 will create an absolute right to informational privacy no matter what the governmental interest involved.  The huge majority of those lawsuits will go nowhere because no constitutional right is absolute. For example, the right to free speech falls in certain circumstances to the need to ensure public safety.  The right to bear arms does not mean that no regulation of gun possession is allowed.’

“In the privacy context, what will happen in the courts is that a court will balance the nature of the right to privacy and the extent of the intrusion on that right against the governmental interest at stake.  So, while the bank robber may have a constitutional right to privacy in personal information, it will likely fall in the face of the governmental interest of preventing crime.’

“Practically speaking the most important effect of Q2 is that it will lay down a new marker that recalibrates courts’ consideration of the balancing of one’s privacy interests against the government’s interest in its interference. It will say to the courts an individual’s privacy interest in personal information is worthy of more consideration than it previously has been.  It will still allow law enforcement to gain search warrants when they have sufficient justification.  But, it will give simpler and more direct respect to one’s personal information than currently exists.  This is particularly important in the face of ever-evolving technology that outpaces the courts’ current ability to keep up.’

“Rest assured that Q2 does not mean that criminals will go free and that our society as we know it will fall apart because people care more about protecting their private information than each other.  Rather, Q2 is a moderate, rational and significant improvement in our ability to protect our personal information from unjustified governmental intrusion.”

Manchester Senators Donna Soucy (D-18) Kevin Cavanaugh (D-16), and Lou D’Allesandro (D-20) voted against this measure. Soucy and Cavanaugh declined to comment for this report.  D’Allessandro said, “I think the amendment is not needed.”