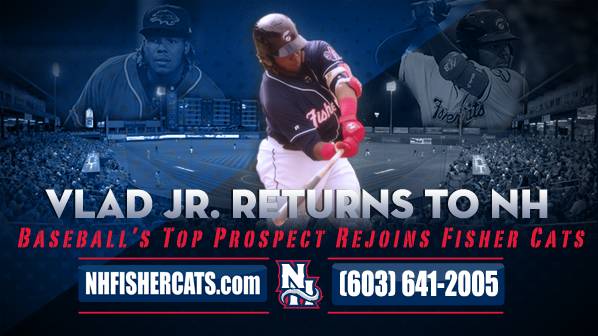 MANCHESTER, NH – Despite numerous rumors to the contrary over the past few weeks, vaunted prospect Vladimir Guerrero Jr. returns to the New Hampshire Fisher Cats roster on Thursday.

Guerrero left a game against Akron in early June with a reported leg injury, and was cleared for rehab assignments earlier this week in Florida, going 3-for-9 with two doubles in Gulf Coast League play, followed by a contest with Advanced-A Dunedin on Tuesday.

That, combined with his utter domination of the Eastern League in April and May lent rumors to Guerrero not returning to Manchester, instead moving straight to either Triple-A Buffalo or even Toronto once his injuries were fully healed.

Guerrero is the top-ranked prospect in baseball, according to both MLB.com and Baseball America. As the youngest player in Double-A, the 19-year-old is hitting .407 with 11 home runs, 18 doubles and 55 RBIs in 53 games with the Fisher Cats.

He returns for a four-game series with the Harrisburg Senators which includes Harry Potter Night on Friday and Star Wars Night on Saturday.

Love local? Sign up for the InkLink FREE daily eNews and never miss another thing!