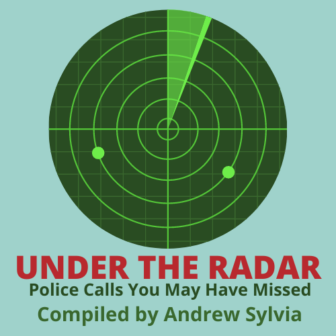 Beyond the headlines, the men and women of the Manchester Police Department respond to requests from local residents around the clock, with incidents the public may often find valuable or interesting going unnoticed.


In an attempt to help shed a light on those incidents and spur a greater discussion on what’s going on in our neighborhoods across the city, here are a few of those incidents that flew under the radar, as obtained from the Manchester Police Department Records Division. For the Manchester Police Department’s daily logs, which provide the starting point for these reports, click here.


The actual names of individuals and organizations in these stories have not been revealed to protect them from potential harassment, excluding arrests where information is available. Anyone accused of a crime is innocent unless proven guilty by a court of law.

Anyone with additional information on these incidents is welcome to share their accounts of what happened by emailing andy@manchesterinklink.com

Jan. 18, 1:32 a.m. – Two men were fighting at a business on Lowell Street and a female employee called police to break it up.

The female employee told police she was the only employee working there at that time and was fearful of the men. She said one was wearing a brown jacket, the other was wearing a black jacket and both were Caucasian.

Several units arrived on the scene to end the fight; it was later determined to be caused by intoxication. No charges were filed.

Jan. 18, 12:46 p.m. – A woman called from a restaurant on South Willow Street claiming she was threatened by someone she referred to as “Bobby.”

According to the woman, “Bobby” was threatening her because she would not remove her items from his house. She also claimed that she was unlawfully evicted from her home. It was not clear if these two incidents were related.

Police attempted to contact the woman at the restaurant in person, but she had already left.

Jan. 18, 12:47 p.m. – A woman on Manchester Street contacted police about people who allegedly followed her from Union Street, with the woman feeling that her life was in danger.

Additional information was not provided.

Jan. 18, 1:13 p.m. – A man called police after noticing a black dog tied up behind a store on Maple Street near a dumpster for over an hour.

The manager of the store called a few minutes later, unaware the man had called.

The matter was solved approximately 10 minutes later, additional details were not provided.

Jan. 18, 7:42 p.m. – A caller from Central Street told police that a kid going by the alias of “Dylan” had just slashed his tires and was now in front of his house seeking to confront him.

The caller claimed that he had the slashing on camera and that “Dylan” was also a drug dealer.

The caller, who gave police the name “Richard” said that “Dylan” owed him $100, but it was “definitely not drug money.”

Additional information was not provided on the report, although a separate case was launched in relation to the call for service. Information from that case was not immediately available.

Jan. 20, 7:55 a.m. – A man called police from a building on Manchester Street, claiming that a woman had just punched him in the face. The man said that she was also threatening others.

The man did not want medical attention and did not know the woman’s name, adding that she was moving outside the building as he spoke. He did not have a description of the woman.