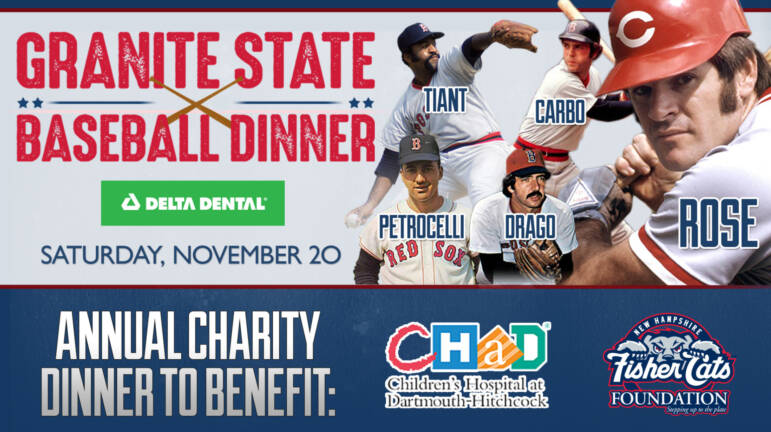 Manchester, N.H. – The New Hampshire Fisher Cats (Double-A affiliate of the Toronto Blue Jays), the Fisher Cats Foundation, and the Ted Williams Foundation have confirmed the initial group of guests for the 2021 Granite State Baseball Dinner, presented by Delta Dental.
This year’s fundraising event will be held on Saturday, November 20 at 5 p.m. at the DoubleTree by Hilton Manchester Downtown Hotel Expo Center. Since 2007, the event has hosted over 13,000 guests and donated nearly $2 million to the Children’s Hospital at Dartmouth-Hitchcock (CHaD) and the Fisher Cats Foundation. Tickets are available at NHFisherCats.com.
All-time MLB hits leader Pete Rose headlines this year’s event, making his first-ever appearance at the Granite State Baseball Dinner. The 17-time All-Star amassed 4,256 hits in his 24 big league seasons, and won three World Series Championships (1975, 1976, 1980). One of the most decorated players in Granite State Baseball Dinner history, Rose earned Rookie of the Year honors (1963), an MVP award (1973), and three batting titles (1968, 1969, 1973) during his storied career.
Rose will be joined by Red Sox legends Luis Tiant, Rico Petrocelli, Bernie Carbo, and Dick Drago, four players who faced Rose and the Reds in the iconic 1975 World Series between Boston and Cincinnati.
Luis Tiant, affectionately known as ‘El Tiante’, was one of the most dominant, durable pitchers of his generation. Over 19 seasons, he dazzled lineups with his overpowering stuff and unique, back-to-the-hitter wind-ups. A three-time All-Star, he shined for the Red Sox from 1971-78, perhaps making his biggest impact for the 1975 American League Champions.
In Game 6 of the 1975 World Series, Bernie Carbo hit one of the most memorable home runs in Red Sox history. Facing elimination and a three-run deficit in the bottom of the eighth inning, Carbo was brought in to pinch hit with two on and two out. He drilled a game-tying blast to center field, and the Red Sox eventually prevailed in the 12th inning on a Carlton Fisk homer.
Rico Petrocelli is regarded as one of the best defensive players of all time. He spent his entire 13-year career in Boston, and was inducted into the Red Sox Hall of Fame in 1997.
Dick Drago spent 13 years in the major leagues as a pitcher for the Red Sox, Royals, Angels, Mariners, and Orioles, and pitched in the iconic 1975 Red Sox – Reds World Series.
Tickets for this year’s event are $80 and can be purchased at NHFisherCats.com and by calling 603-641-2005.
Doors to the event will open at 5 p.m. with a silent auction and an autograph session with the honored guests from 5 – 6:45 p.m. The dinner and the evening’s program, featuring the popular celebrity Q&A, will begin at 7 p.m.
The primary beneficiary of the dinner is the Children’s Hospital at Dartmouth-Hitchcock (CHaD). CHaD, New Hampshire’s comprehensive, full-service children’s hospital, is committed to providing outstanding compassionate care for children and their families. Offering primary, specialty, and tertiary care to the children of New Hampshire, Vermont, and beyond, their focus includes keeping all kids healthy and safe.
The New Hampshire Fisher Cats established the Fisher Cats Foundation to be a catalyst for the betterment of communities statewide by supporting youth programs that encourage education and promote healthy living. Through the generous support of players, employees, sponsors, and fans, the Fisher Cats Foundation continuously works to make a positive impact throughout New Hampshire and north-central Massachusetts. As the primary funding source for the team’s philanthropy, the Fisher Cats Foundation supports a wide variety of non-profit organizations and coordinates several fundraising programs and events. Since its inception in 2006, the Foundation and the Fisher Cats have provided more than $5.7 million in monetary and in-kind donations to thousands of non-profit organizations.
For more information about the charitable Granite State Baseball Dinner, presented by Northeast Delta Dental, please call the Box Office at (603) 641-2005 or visit NHFisherCats.com.