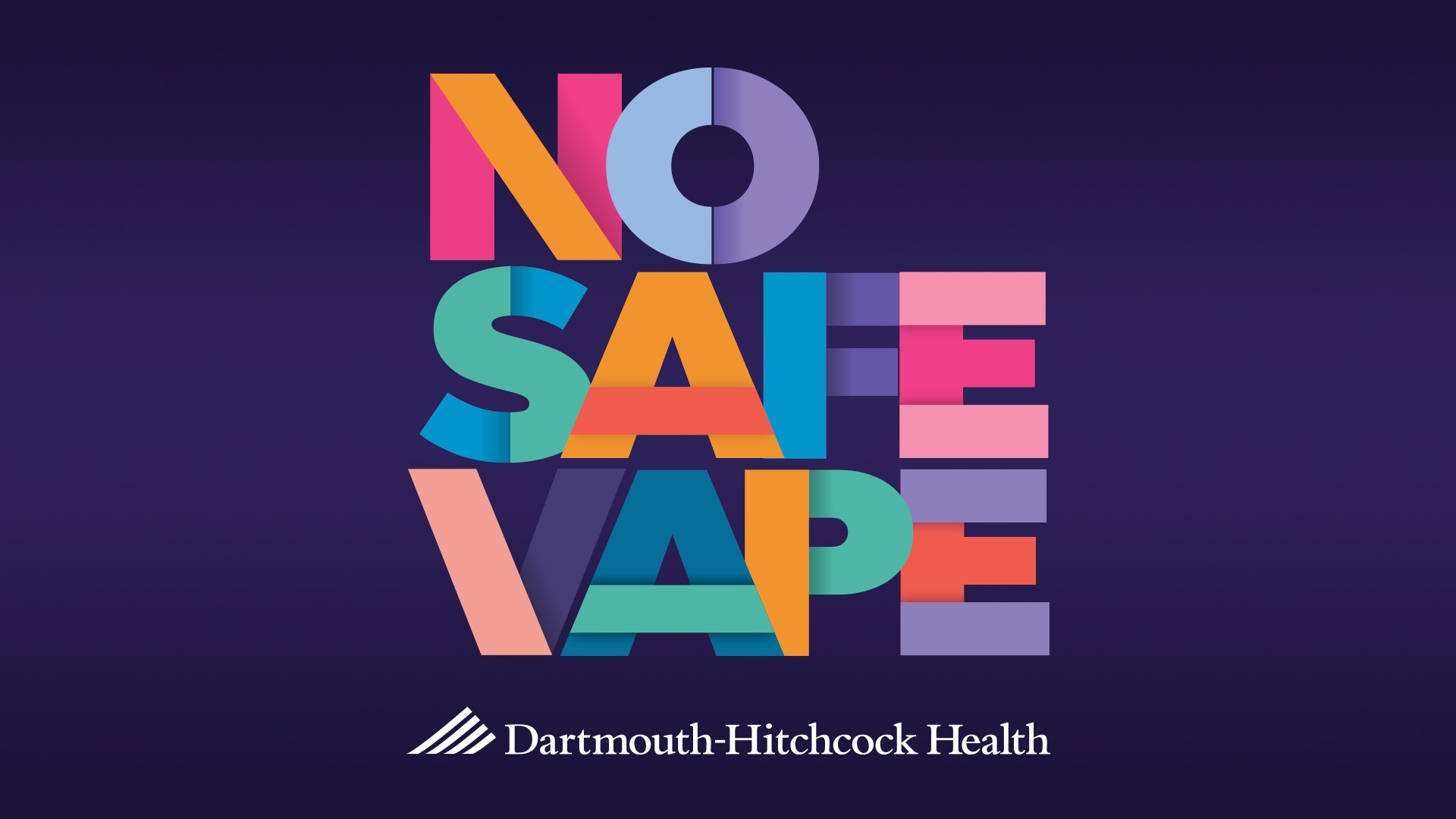 LEBANON, NH – Dartmouth-Hitchcock Health (D-HH), which delivers care to a population of 1.9 million across Northern New England and operates New Hampshire’s top hospital according to US News & World Report rankings, is launching a multi-state vaping education campaign entitled “No Safe Vape,” in response to a major health issue facing the region and the nation.

According to the Centers for Disease Control and Prevention’s (CDC) annual Youth Risk Behavior Survey, New Hampshire has the highest percentage of high school students reporting daily use of electronic vapor products such as vapes and e-cigarettes. With the growing number of vaping-related illnesses and deaths, “No Safe Vape” aims to educate young people and their families in New Hampshire and Vermont about the dangers of vaping and to provide resources for those seeking further information or help quitting.

The “No Safe Vape” campaign, which launches November 19, coincides with the Great American Smokeout on November 21, a national effort to encourage smokers to quit. “No Safe Vape” presents facts about the dangers of vaping on a new website, https://go.d-h.org/NoSafeVape, and features a comprehensive list of local, regional and national resources. A social media campaign, including a 20-minute Facebook Live event with D-HH experts and teens, and a thought-provoking educational video on the harmful contents of vape cartridges, will support the effort. In addition, a D-HH pediatrician and expert on adolescent tobacco use prevention will brief members of Congress on Capitol Hill on November 20, and a multi-state advertising campaign will be launched throughout communities D-HH serves.

“Dartmouth-Hitchcock is helping to open up the lines of communication between those who are most susceptible to vaping and their families by way of the ‘No Safe Vape’ campaign,” said Joanne M. Conroy, MD, CEO and President of Dartmouth-Hitchcock and Dartmouth-Hitchcock Health. “As the region’s largest academic health system, it is incumbent on us to share our knowledge and expertise while promoting the great work of so many local, regional and national organizations in this growing area of concern.”

At the invitation of U.S. Senator Jeanne Shaheen (D-NH), Dartmouth-Hitchcock pediatrician Susanne Tanski, MD, will brief members of the Senate in a closed-door session on Capitol Hill on Wednesday, November 20, about the hazards of vaping and next steps to reverse the epidemic rates of vaping among adolescents. Dr. Tanski is section chief of General Pediatrics at the Children’s Hospital at Dartmouth-Hitchcock (CHaD) and Associate Director of the C. Everett Koop Institute at the Geisel School of Medicine at Dartmouth. An expert on adolescent tobacco use prevention and parental smoking cessation, Dr. Tanski is featured in videos on https://go.d-h.org/NoSafeVape, and will share her expertise on the harmful effects of vaping with members of Congress.

“The ‘No Safe Vape’ campaign is a significant step forward in the overarching mission to dispel harmful misconceptions about vaping and further emphasize the severity of this nationwide issue,” says Tanski, who also testified in October about the dangers of vaping before the U.S. House Energy and Commerce Committee. “Our young people simply do not stand a chance against the predatory practices of tobacco companies that are contributing to this health crisis. It is imperative that we do our best to help people understand the very serious risks of vaping.”

One of the videos created especially for the campaign, filmed in a format similar to a social media recipe video, highlights the harmful chemicals contained inside a vape cartridge.

For more information about the dangers of vaping, please visit https://go.d-h.org/NoSafeVape.