MANCHESTER, NH – On Feb. 10 Xavier Rios will receive a Gold Key during the 20th Annual Scholastic Art Awards, part of a national arts and writing competition. The awards ceremony will be held at Pinkerton Academy at 1 p.m. He is one of 11 Gold Key winners from Memorial whose work was chosen from submissions regionally.

His portfolio of work focuses in on the homeless and opioid epidemics, which Xavier says have overlap.

“It’s my first documentary, and it’s called ‘Epidemic,’  based on the homeless epidemic happening in Manchester. We have a very big number of homeless people on our streets, and I wanted to raise awareness through my photos by showing different homeless people and how they’re living in Manchester,” said Xavier. “At the same time as a whole, I’m tying in with the opioid epidemic which is also happening throughout New Hampshire, and you can see it in their faces what the use of drugs does to a person.”

After graduation Xavier will continue studying photography and hopes to travel the world so he can tell more stories through his photography. He said he chose this particular topic because it’s serious and relevant and happening now, and thought it would be received well by judges.

“I’ve always loved the city, and the homeless are all around you in our city. Not a lot of people pay attention to them, and a majority of people think all they do is ask for drug money and then go buy drugs and overdose. There are real stories behind a majority of these people,” Xavier said.

He added that he sometimes offered those he photographed water or food.

“I just wanted to help them out,” he says. “And I hope by exposing to the public to what’s going on through my photos, that will help, too.”

Xavier was also nominated for the American Voices & Visions Medal for his work.

Ron Budway has been Xavier’s teacher at Memorial for four years, and serves on the NH Scholastic Art Awards Board. He’s proud of all the students in Manchester School District who were honored this year (see list below). 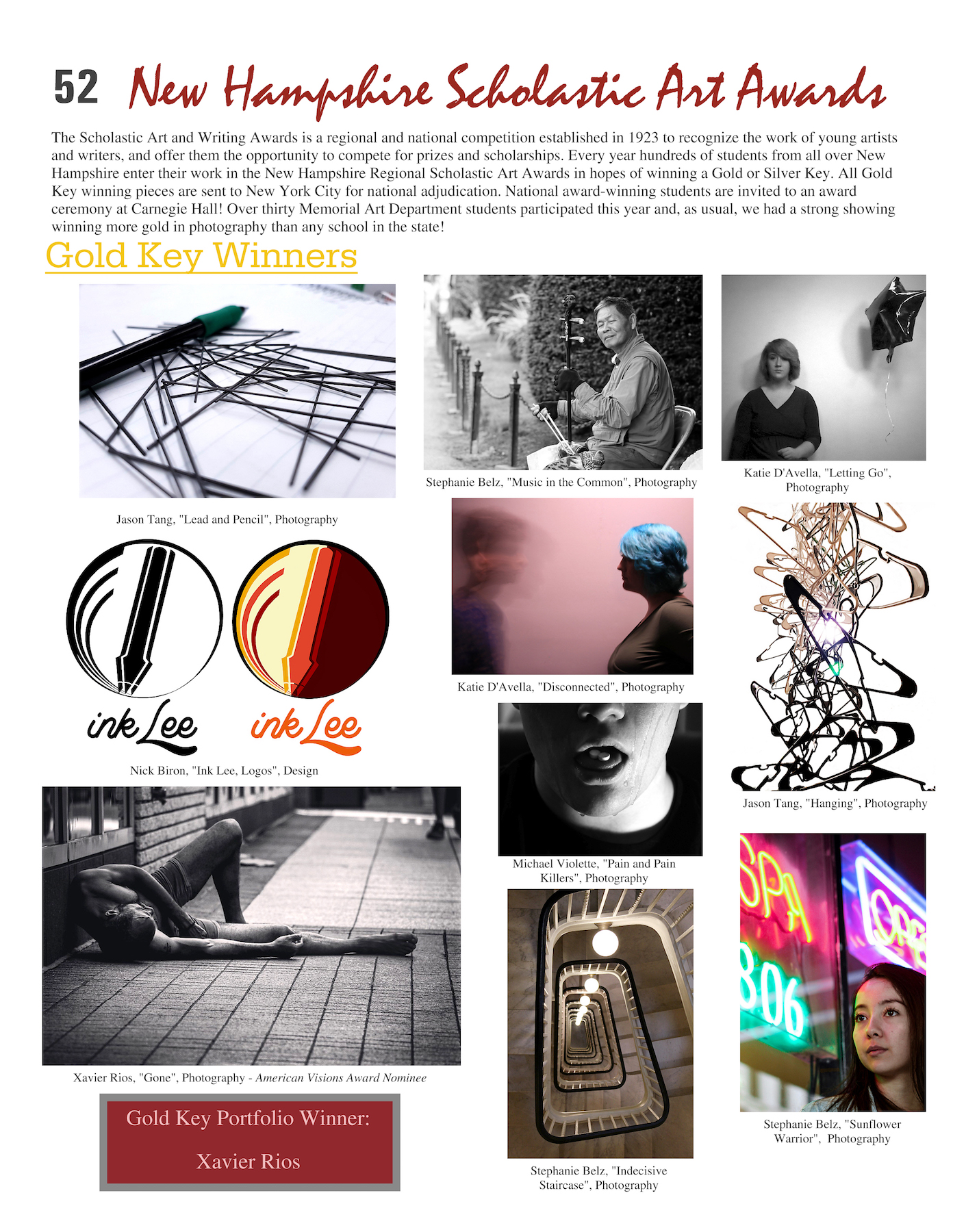 Above and below, pages as they will appear in Memorial High School’s yearbook to honor work by students who won this year’s NH Scholastic Art Awards. 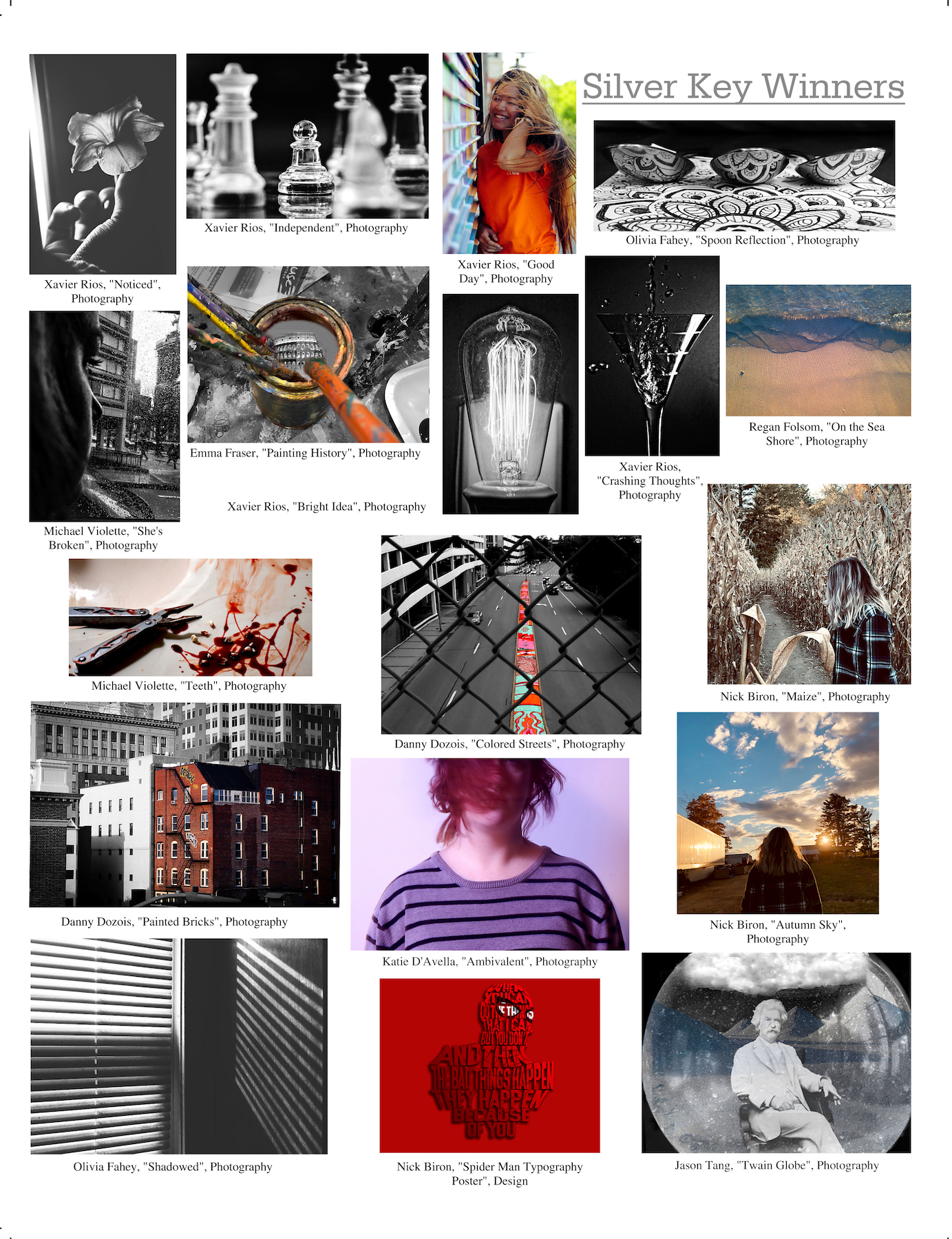 Budway says the Scholastic Art Awards is the oldest, largest, most prestigious competition in the world that recognizes outstanding achievements in the arts by young people.
“The competition begins in regional competitions around the country, including New Hampshire, where panels of judges blindly adjudicate works in up to 17 categories that were submitted digitally by the students and their teachers. Approximately 7 percent of all entries receive the highest honor – a Gold Key. All Gold Key winners are sent to New York City for national adjudication,” Budway said.
A small percentage of those pieces are awarded gold or silver at the national level. All national gold key winners are invited to a star-studded ceremony at Carnegie Hall.
“Memorial has had six students win seven national awards in the last 10 years,” says Budway. “I have attended the national ceremony at Carnegie Hall three times. It’s amazing. The top of the Empire State building is lit up in gold to honor the winning students.” 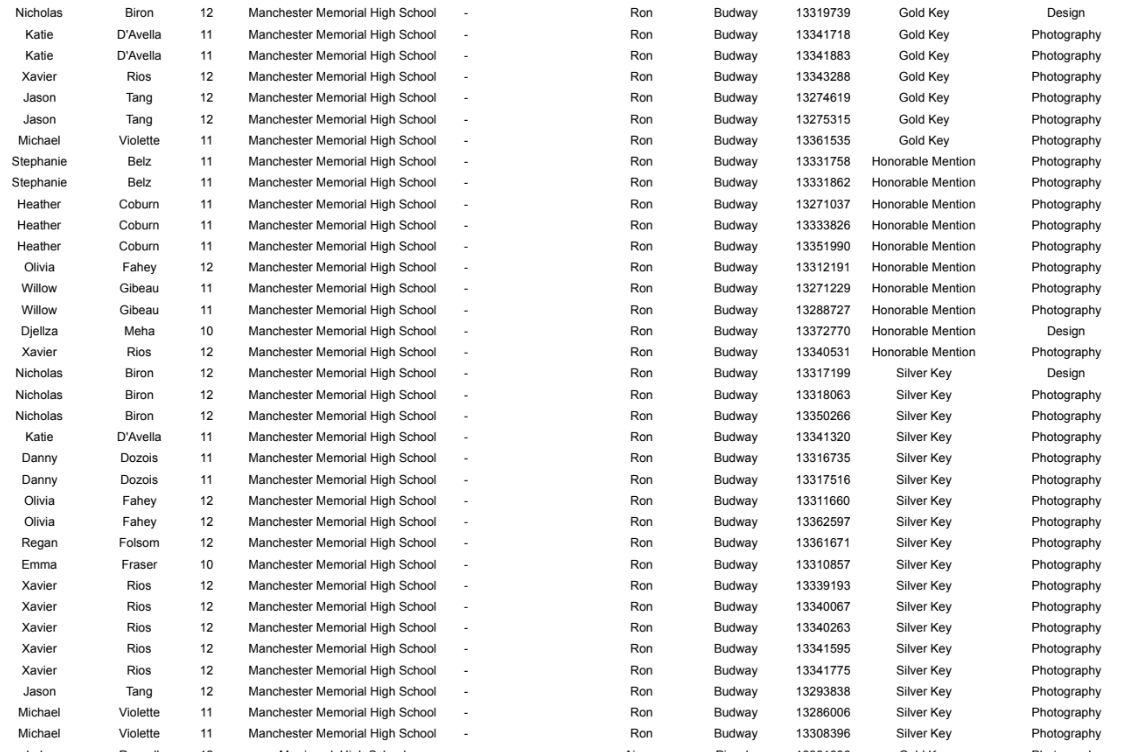