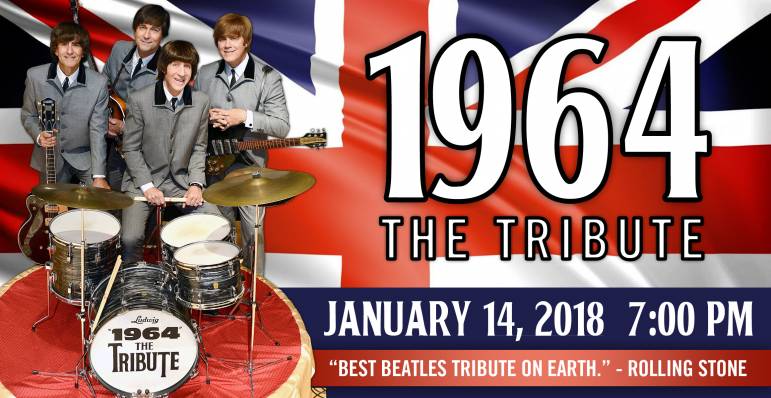 MANCHESTER, NH – The Palace Theatre is thrilled to welcome the ultimate Beatles Tribute band – 1964 the Tribute – on January 14 at 7 p.m. The fab faux four pay homage to the most influential act of the rock era for one night only. Sing along to all your favorite classics as 1964 the Tribute delivers an authentic Beatles experience.

Praised as “the number one Beatles tribute in the world” by Rolling Stone Magazine, 1964 the Tribute is comprised of world class musicians Mark Benson, Mac Ruffing, Tom Work, and Robert Potter. The four members have been together for more than 30 years, and continue to flawlessly recreate the thrill and excitement of an early ’60s live Beatles concert. They have shared the stage with AD/DC, Dave Matthews Band, James Taylor, and Dick Clark, to name a few. Complete with period instruments, clothing, hairstyles, and onstage banter, the band channels the magic of the Beatles, from start to finish.

1964 the Tribute is in New Hampshire for just one performance – January 14 at 7pm at the historic Palace Theatre. All tickets are $38.00. Click here now to get your tickets before they sell out online, or by calling the box office at 603-668-5588.

About the Palace Theatre

The Palace Theatre is a nonprofit performing arts center that hosts its own professional company, youth and teen program and presenting acts. It is committed to achieving its mission through preserving the historic facilities of the theater, responding creatively to the cultural and entertainment needs of the community, and governing in a fiscally responsible and strategic manner. For information about pricing, visit the Palace Theatre’s website at www.palacetheatre.org.