If you’ve been by Hope lately (or even semi-lately—within the past six months), you’ve seen the plywood covering the broken windows. Even with the upbeat and positive graffiti over the boards, the front of the building looks pretty horrible. You may have read here or here about how the windows were broken. I’ll give a short answer:

Rocks break glass. Rocks break hearts when they’re thrown by an adult male into the windows of a sanctuary for folks escaping the hell of addictions.

Thus, on top of a pandemic and all the changes and impediments that brought, the members of Hope Nation returned to a home that looks from the outside like downtown Beirut in the 1990s or the aftermath of Kristallnacht back in 1938. Still, as Reverend King told us, “The arc of the moral universe is long, but it bends toward justice.” The Hope building is getting new windows—more energy-efficient and soundproof, and significantly less attractive a target than the previous floor-to-ceiling storefront ones.

Replacing those windows is not free, of course, nor is it even cheap. All told, Hope will pay about $45,000 for new windows. (Here, I’d like to insert a lengthy list of salaries and other things Hope could have spent $45K on, but I won’t. One thing recovery has taught me is that part of living life on life’s terms is accepting reality rather than generating resentments from it. Broken windows need replacement, no matter what needs go under-met.)

In June, when the most recent window was broken, I wrote a piece on the experience that was shared on Facebook with a “donate” link attached. I didn’t share the piece, nor did I affix the link. In fact, I would have been opposed to it (https://tinywhitebox.com/june-21-2020/). I would have been wrong, because that link led, first, to donations of about $6,000 toward the window replacement. Second, and far more important, those donations offered members of Hope Nation (and their allies, friends, families, etc.) a chance to make manifest their heartbrokenness and their intention to redress this nonsense.

Tuesday, December 1, is Giving Tuesday, a nationwide opportunity for folks to demonstrate their gratitude for nonprofits that make a difference in their community. Hope has rarely asked for money in so direct a fashion, but today I’m asking each reader to consider a donation to help pay for replacing windows at Hope. We still need $39,000, but every donation helps get us closer.

Hope closed March 15 out of an “abundance of caution” that turned out to be no abundance at all. Over the next four months, our windows were broken a half dozen times, each incident another festering wound in the body politic of the Hope tribe. Since reopening July 15, we’ve seen lives transformed, relationships healed and the sick and suffering move toward healing and health. Windows are not a part of what we do—I’ve never heard anyone say to a person new to recovery, “Now that you’ve stopped using, why don’t you admire the clarity of that glass.” We usually treat pain, not panes.

Still . . . windows do offer a metaphor for recovery. Windows keep out the wind and rain. They let in light. They let us see where we’ve been and, better, where we can be headed. 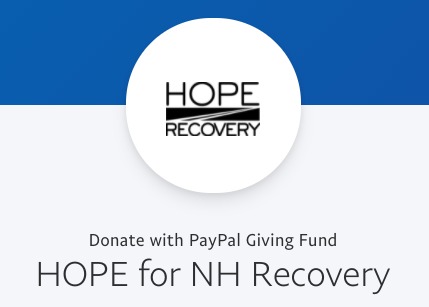 Keith Howard is Executive Director or Hope for NH Recovery.