MANCHESTER, NH – During a recent Board of Mayor and Aldermen’s meeting, Alderman Garth Corriveau posed a question, one he said he fields often from constituents: Why is the seasonal Manchester Farmers’ Market held on Thursdays during typical working hours?

“I would think that makes it difficult for a lot of people to get there and be consumers,” said Corriveau.

Hey, when it comes to difficult, try being a farmer, says Charlie Reid, market president and farmer/owner of Stone Wall Farm in Nottingham.

“When we decided to do Manchester Farmers’ Market, which started because the Chamber reached out to us as farmers, we said OK. That was 18 years ago, and at that time there were eight farmers markets in the entire state. Now there are over 100, and every time another one pops up, we lose more customers,” says Reid.

Actually, there are just over 60 markets listed by the state Department of Agriculture, although there may be some that have not been added to the 2015 list as yet, according to the state.

For farmers participating in Manchester’s market, including Reid, Thursday was selected because it’s an “open day,” allowing them to participate in other markets, like Portsmouth’s market, known as the Seacoast Growers Association, one of the largest in the state. It is held Saturday from 8 a.m. to 1 p.m. and draws around 5,000 customers at a time, says Reid. 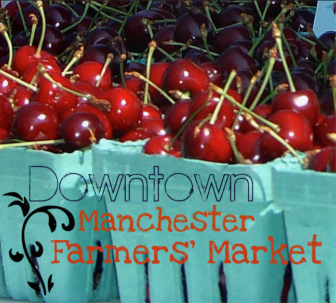 “Everybody sits back and thinks ‘these guys must be making a fortune.’ No, we’re not. I mean, if you have a Chevy dealership in Manchester, and all of a sudden 10 more open up, who’s making money?” says Reid.

With his farm in Nottingham, “out in the middle of the woods,” Reid says bringing organic vegetables to market in Manchester and other markets is an ideal way for him to sell his produce.

“Markets are the best venue for vendors – we can pack up the night before or in the morning, go to one location and, hopefully, have the community come to us,” says Reid.

The good news for Manchester consumers is that all last year’s vendors will be returning, says Reid.

“Yes, we’ve lost vendors to other markets over the years. We have managers from other markets coming in and enticing our vendors to leave. How do you think we feel about that? This year we have three new vendors, and we have a guest spot, so guest vendors can try it out and see if it’s a good fit. We also have 15 to 20 bakers that try to join our market every year. We have three, which is more than enough,” Reid says.

Variety is the key, he says.

“I’m curious to see what shows up when we open on [June 18], to see if we can get a good balance. We’ve been advertising in farmers market weekly bulletin. Unfortunately, we get a lot of prepared foods people, cookies and things like that; that’s not a farmers market,” Reid says. 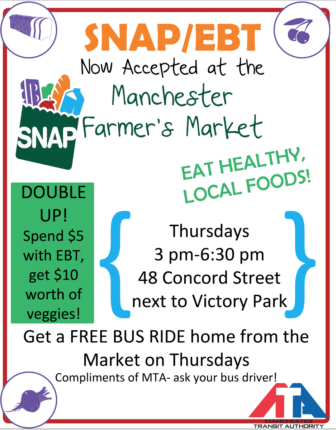 Along with two certified organic farmers, Manchester’s market also includes Fresh Start Farms, a group of immigrant and refugee farmers who grow produce “you don’t see on American farms,” which adds something unique for all those who come for variety. They also participate in markets in Merrimack, Salem and Bedford.

“Ours is a meat-and-potatoes market. We don’t have affluent customers looking for filet mignon. We sell pork, eggs, meat, vegetables. You’re always going to have the naysayers, the negative comments, those who say ‘I wish they did this on Monday morning or Friday afternoons,” Reid says.

Will Craig, the city’s Director of Economic Development, says he understands where Reid and the market’s farmers are coming from. He also understands that there may be ways to modify or expand on the current set up, which lines a small stretch of Concord Street, that would bring more value to everyone.

“We’d actually love to see the farmers’ market expand into a real community event, maybe in one of our parks or someplace more central downtown,” said Craig. “We were sort of hoping moving it over to Victory Park might be a good change, providing more room for more vendors, and maybe partner with Intown Manchester to have other activities going on.”

However, with planned construction in the park area this year, the timing wasn’t right for a test of that location. But Craig would like to revisit the idea, sit down with Reid and any of the other farmers, any time, to talk about how to grow the market and make it even more successful.

“There’s a lot of potential, and it’s a great asset to the city. We’d love to have that conversation,” Craig said.

About Manchester Farmers’ Market: This year’s market season opens June 18 at 3 p.m. and will continue every Thursday from 3-6:30 p.m., rain or shine. Mayor Gatsas will be on hand for the official launch, and celebratory cake will be served from Blackberry Bakery, one of 15 vendors currently signed on. SNAP/EBT  are accepted, and there are free bus rides home from the market offered through MBTA.

Note: Construction is ongoing around the area, so be mindful of detours. Free parking will be available to market shoppers in the Harnett Parking Lot, 99 Lowell St., during market hours.