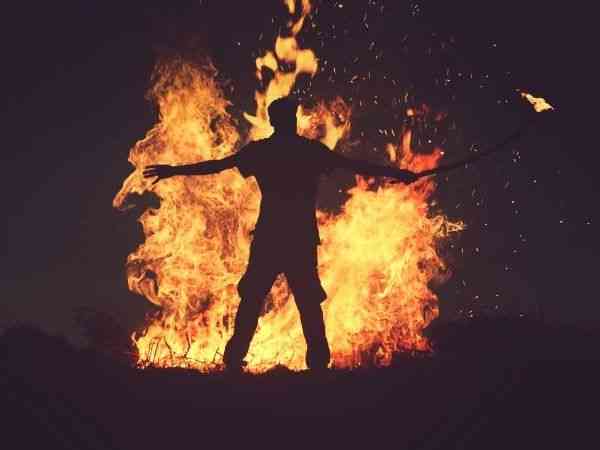 Today’s news about the authorized taped recording of Trump being Trump, admitting to the gold-star reporter, Bob Woodward, back in early February, that he was well aware of COVID being in the air and that the virus would likely kill 5 percent more people than the flu and it would kill countless people of all ages, young and old, is undeniably the most vile revelation we could have expected out of our lightweight leader.

As the impending doom which Trump was aware had already arrived on our shores and was already raining down on our country (we just didn’t know it), well, the Big Dorito decided as the President of the United States of America that the best move he could make was to pacify us, play us for infants, as inferiors, or, as he said, because he didn’t want to panic the country.

Geez, thanks, Prez.  Your empathy shines at the oddest times.  Even when it continuously smells like an old pair of pantyhose.


Still, the revelation Trump spoke of jogged my memory and reminded me of something that happened a few years back at my own home, whether it did or not.

I was in the basement of our humble home, jazzing it up with a little bit of something-something when I noticed a fire started to burn in the corner of the room.  It looked like maybe a paint can caught flame or a piece of insulation.   Through my crooked lens, I surmised that, yes indeed, the house was officially on fire and my family was all in that same house, watching TV in bedrooms or doing homework or folding laundry – content, relaxed, unaware.  And even if the three people I am most responsible for in the world had no idea a fire was burning in the basement, maybe it’s best I keep this to myself.

After all, I don’t like to get my daughter excited.  She’s such a big fan of mine, just laps up the water I walk on.  I need as many fans as I can get.  It feeds my warped ego.

And my son, my little boy Leo, I don’t like to bother him when he’s watching his shows.  If I ran up all panicked and told him about the fire that was now clearly eating up the entire basement and pumping smoke through every vent in the house, the news might inconvenience him or get him angry that he might have to put his show on pause.

An unthinkable gesture on my part to disrupt his days, whether it means life or death.

And the wife, well, she’s getting old, like me, so, she’s kind of dispensable.  I mean, she’s going to die of something someday.  Not my fault.

So, I bail out of the basement because the hair on my legs has burnt off and head to the first floor and there’s the wife, on the couch, fast asleep.  At this point, I can see the smoke coming up under the basement door.  So, I get a rug out of the bathroom and tuck it under the door to block the smoke.  Like we did in our dorm rooms.

Major failure, now the flames are coming through the kitchen floor but the wife is still asleep and I don’t want to wake her cause she will never get back to sleep that night.

I also took all the batteries out of the fire alarms in the house.  That noise alone is very panicky.

All of a sudden, my son yells from upstairs.  “Hey, Dada. You smell smoke?””Smoke?  What smoke?  Yeah, just a tiny bit of smoke, son.  Don’t worry.  It should magically disappear.”

Then, I make some stupid wave move with my hand.

With that, I end the conversation and tell him I’m the greatest father of all time and I raised him better than anyone and he should go about his business and know that I’m dealing with this problem better than anyone has ever dealt with any problem ever.  Inferno or not.

“Shut your door!  Don’t panic, son. This is gonna go away very quickly.”

Flustered, I barrel up the stairs to my daughter’s bedroom just as the flames from the basement have engulfed the living room, where, unfortunately, my wife was still sleeping.

Hey, it’s an election year, I say to myself  Got to make some tough calls.

“Daddy! Daddy!” my daughter is shouting as she crashes out of her bedroom.  “Why didn’t you tell us the house is on fire?  Leo!  Leo!”

Oh boy, the flames have made their way through the vent ducts and did in fact start to rush into my daughter’s bedroom.  I wasn’t told the fire would do that.  Hoax!

Now, she’s losing her mind, screaming, looking all hot and bothered, like she needs some fresh air.  Either that or she’s choking on the smoke.
I start to mock her as she pushes by me.  “Why are you covering your mouth, little girl? I can’t hear you?  What are you trying to be politically correct?”

“What are you talking about!” she screams, two-stepping down the stairs into the fire in the living room.
Somewhat frazzled but never one to let on, I open the door to my son’s room and there he is, hanging out the window,  just about to jump two stories onto the porch.

“Dada, why didn’t you say the house was on fire!  Now, everything we have is ruined!  Where’s Mom?! Where’s DD?!”
With that, the little dude just jumped, right out the window.  Why is everyone so panicked?  I can’t understand this.  Relax, stock markets up.

Down the stairs I go and what do I see, my little daughter dragging my wife off the couch just before her mother was turned into a bonfire.

As the fire engines roared up the road and the sky was filled with smoke and as we all watched our whole lives burned up before our eyes from the neighbor’s front lawn, I still took solace in knowing that I’m the Man of house and I like to think of myself as a tough guy and, well, I have great hair.

Cool dudes with great hair do not panic.  Everybody else does.

Rob Azevedo can be reached at onemanmanch@gmail.com.