MANCHESTER, NH –  A six-inch water main burst underneath Langdon Street in Manchester Wednesday morning, causing a rush of water that washed out part of the street. Water continued downhill and flooded Canal Street, forcing a road closure and detour for motorists. 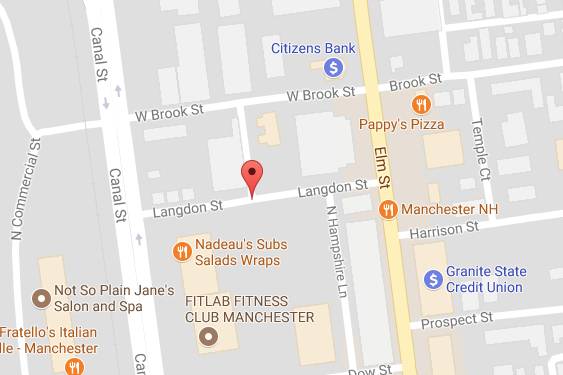 A vehicle parked on the north side of Langdon Street fell in to the hole when the road collapsed, and several businesses and residents lost water supply.
This was the second water main break in a matter of hours – a break in an underground pipe on Hanover Street Tuesday at about 8:30 p.m. also forced police to close Hanover between Maple and Beech streets.
Jay Divini of the city’s Highway Department, said his crews were prepared to get to work repairing the damage once the city Water Works department completed repairs on the damaged pipes.
“We have one at Maple and Hanover and one at Langdon, and right now we’ve got inspectors determining the extent of the damage. We’ll take direction from Water Works, once they fix the mains, then we’ll take over and rebuild the street,” Davini said.
Following a water main break, most of the structure of a roadway can be washed out from underneath the road surface, Davini explained.

“When water rushes with that much force it’s going to wash out the gravel and buckle the pavement, washing it into the catch basin,” Davini said. “And so those will need to be cleaned and inspected for damage as well.”

Water main breaks can happen any time, and aren’t always related to fluctuating temperatures, Davini said. He is waiting for a determination from Water Works before commenting further on the cause of these two breaks.
Repairs will begin as soon as possible, although Davini couldn’t say how long before the roads were reopened.
“In general, my experience is that [Water Works] is very well prepared for things like this and they have the repair parts they need in most cases, so we should be able to get the road repaired in a timely manner,” Davini said.