MANCHESTER, NH – After more than a year of community engagement and planning, Southern New Hampshire Planning Commission has unveiled its Transit-Oriented Development (TOD) Plan for the area South of the millyard between Granite Street and Queen City Avenue.

Planning consultants Ben Carlson and Kathleen Onufer from the consulting firm Goody Clancy unveiled a multi-phased plan for the area during an online presentation Aug. 25 attended by more than 30 participants that focused on the creation of a neighborhood where people could live, work, shop, and enjoy recreational opportunities without using a car.

By improving transportation infrastructure including roads, bicycle paths and walkways, and adding a shuttle system and a passenger rail station, the area would become an attractive place for the development of housing, retail, and office space.

Largely undeveloped, the study area was the former site of the B&M railyard and the Jac Pac meat packing plant. Currently, the Manchester Transit Authority and Liberty Utilities have facilities there.  “The area is an underutilized part of the city that hasn’t changed since it was a railroad hub,” Carlson said

Recent development in the area includes The Hilton Garden Inn Hotel, Delta Dental Stadium, and some housing. Carlson noted that the area remains difficult to get around in because of “the hills, the railroad tracks, and a tangle of chain link fences”.

By creating better connections with the Millyard, the Gaslight District, and Elm Street, and improving walkability, the consultants estimate that a $125 million investment in improved infrastructure could unlock $600 million in potential development. This would include 1,802 residential units, 154 hotel rooms, 785,000 square feet of office space, and 198,000 square feet of retail space.

The transformation of the neighborhood is expected to take place over a period of 10 to 20 years. The first phase of development would create new roadways into the site and networks of bike trails and walkways.

The City of Manchester has applied for a federal BUILD grant to create a pedestrian bridge over Granite Street and put in a new street connecting South Commercial Street and Elm Street through an old railroad right of way. These would alleviate traffic congestion around the SNHU parking garage and be the first steps in improving connectivity and walkability.  The City will learn in November if they will receive the $25 million grant.

The plan also calls for the establishment of parking areas and a shuttle service run by Manchester Transit Authority. This would enable employers in the Millyard and downtown areas to expand their workforce.

The development plan does not require any property owner to commit to redeveloping their property. Rather it is designed to act as a catalyst for development by putting the infrastructure and appropriate zoning regulations in place. 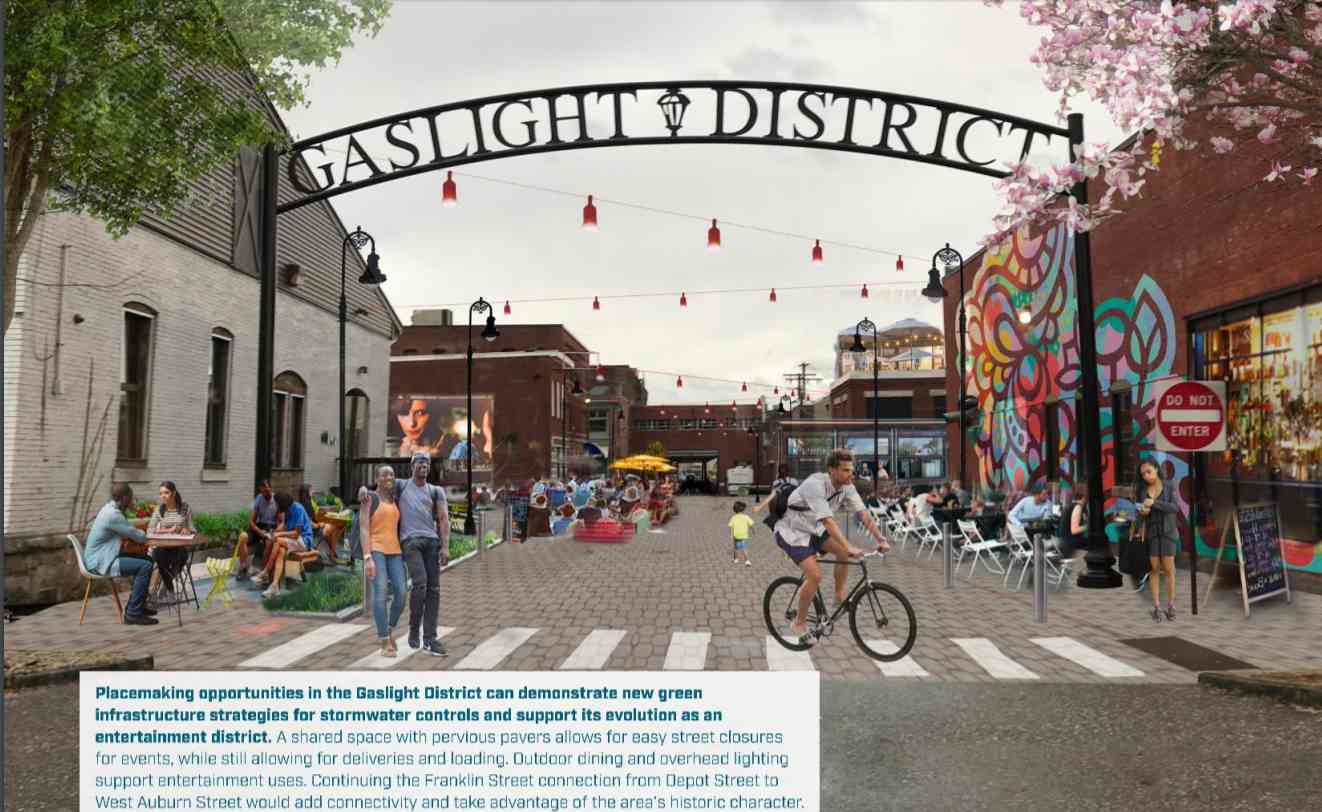 According to Southern New Hampshire Planning Commission’s project manager, James Vayo, private development companies aren’t the only ones interested. Nonprofits like Neighborworks and The Elliot at River’s Edge have also expressed an interest in building affordable housing in the area.

One of the most significant opportunities for transit-oriented development in the area lies in the proposed Capital Corridor Rail Project, which would extend the Boston to Lowell Commuter Rail line to Nashua and Manchester. The railroad station would be located within the study area.

During the community engagement process several scenarios for locating the station were considered. Ultimately the consultants recommended locating it in the middle of the site. The station would be accessed by an extension of Valley Street in an area they call  “the Switchyard.” There would be an area for drop-off, some limited parking, and connection to Manchester Transit Authority buses.

Carlson emphasized that the arrival of rail service may not happen for a decade. However, the plan is designed to prepare the space for it. And if it never happens, the plan is still viable and it will spur additional development even without rail.

If you are interested in learning more about the proposed plans, the Millyard Museum will host an online event on August 27 at 2 p.m. called Manchester on the Move: Transit’s Role in Building the City. Click her to register.

More information is available on the Transit-Oriented Development project website.

The plan will be presented to the Board of Mayor and Aldermen on September 1 and to the Manchester Planning Board on September 17.

Funding for the TOD design project was included in the cost of the I-93 widening project to plan for potential growth and development that might occur as a result of that project, and granted to Southern New Hampshire Planning Commission as part of their Community Technical Advisory Program.