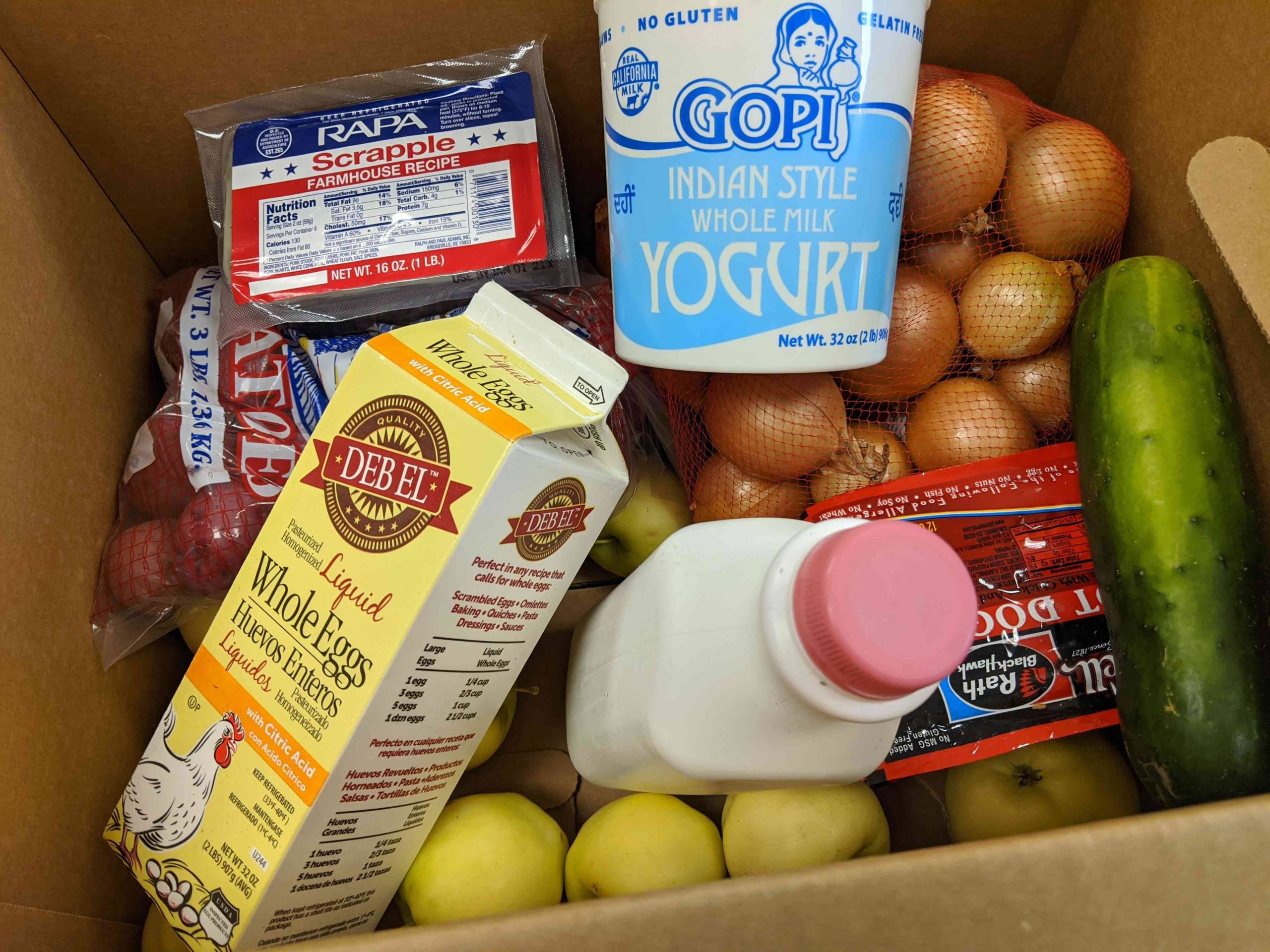 MANCHESTER, NH – Last week NH’s Congressional Delegation sent off a letter to the USDA asking for them to investigate concerns brought to their attention by the NH Food Bank as part of the federal government’s Farmers to Families food box program.

Previously in Round 2 of the food distribution, boxes were supplied by Boston-based Costa Fruit and Produce.  The quality issue arose with Round 3 when the vendor supplying New Hampshire was changed to Delaware-based Vincent Farms.

After reading the concerns raised by both NH Senators Maggie Hassan and Jeanne Shaheen, and U.S. Reps Annie Kuster and Chris Pappas, we asked to see the contents of one of the Vincent Farms boxes.

NH Food Bank warehouse manager Mark Gambeski brought us a box, among the last of the Round 3 boxes leftover from recent mobile food pantry events. Whatever’s left will be distributed this week to individuals through local food pantries. A NH Food Bank mobile food pantry event held last week in the Comcast parking lot in Manchester provided 1,400 boxes to families in need. Gambeski said any family can get a box of food. 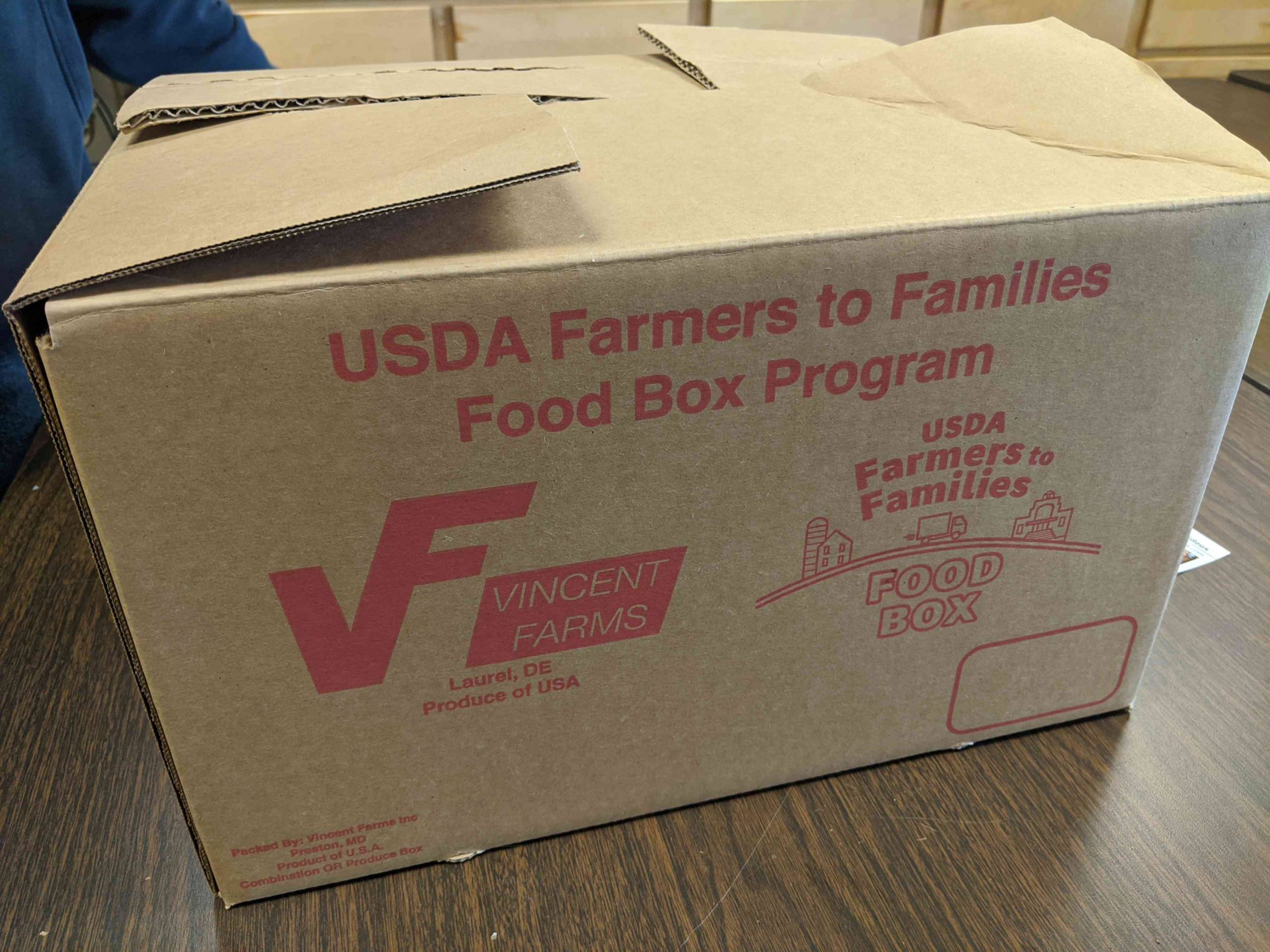 Inside the box was a bag of very small yellow onions, a three-pound bag of small red potatoes, 3 cucumbers, six small golden-delicious apples, a quart of yogurt, a pound of mozzarella cheese, a pint of half-and-half, a carton of pasteurized liquid eggs, a package of hotdogs made from pork and chicken, and a one-pound chunk of scrapple.

“The scrapple is something that’s sort of regional. It’s unfamiliar to most people in New Hampshire. They’re not sure what to do with it,” Gambeski said. Scrapple is eaten more frequently in the mid-Atlantic states, often fried to have a crispy exterior as a side dish during breakfast. The listed ingredients for Rapa Scrapple include pork livers, pork fat, pork snouts, cornmeal, pork hearts flour and spices.

Gambeski said the main difference between the Costa boxes and the Vincent Farms boxes was the amount of fresh produce. Round 2 boxes were loaded with “really good looking” produce, as well as chicken. He said the onions and potatoes in the Vincent Farms boxes were comparatively smaller, the variety of produce limited, and the protein selection was of lower quality. The Food Bank did field some complaints from people who were disappointed in the quality of the contents of the most recent food boxes, compared with the previous ones.

“We’ll see what happens in Round 4,” Gambeski said.

According to the USDA site, Vincent Farms received $42,871,579 for their Round 3 distribution, which also went to Connecticut, Delaware, Maine, Rhode Island, New York and Pennsylvania. In Round 4 they are receiving $17,586,025 and will be distributing to Delaware, New York and Rhode Island. 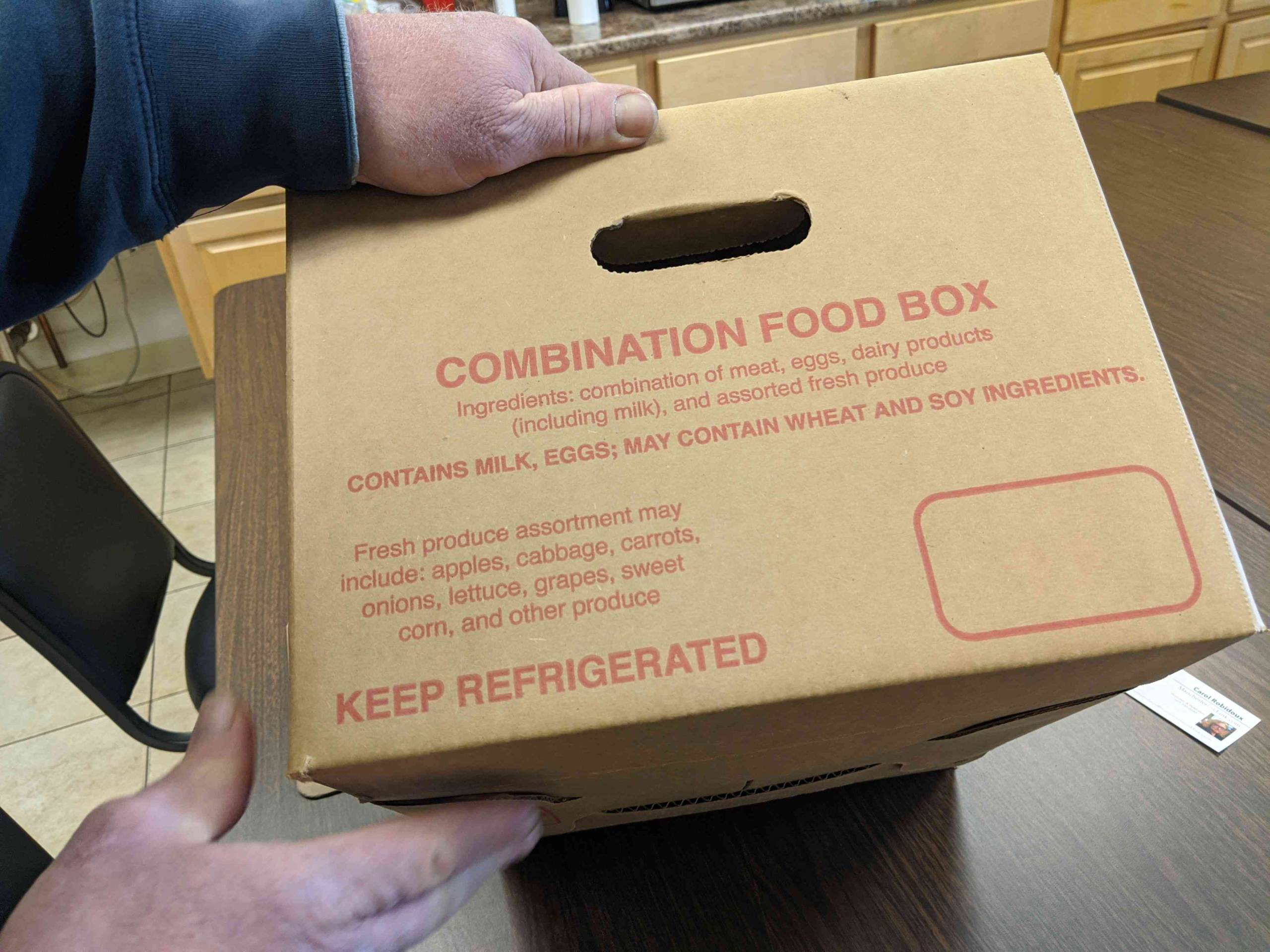 Lancaster Foods will be the Round 4 distributor for New Hampshire, as well as Maine and Vermont. They were awarded $4,064,761 for 97,011 boxes of food.

According to the USDA website, the program was launched as part of the Coronavirus Food Assistance Program in April and was designed to purchase and distribute agricultural products to farms across the country to distribute to those in need.

Through this program, USDA’s Agricultural Marketing Service partnering with national, regional and local distributors impacted by the closure of restaurants, hotels and other foodservice businesses, to purchase up to $4.5 billion in fresh produce, dairy and meat products from American producers of all sizes. The program supplies boxes of fresh fruits and vegetables, dairy products and meat products from producers which are distributed in “family-size” boxes by regional distributors to food banks and faith-based organizations, and other non-profits serving Americans in need.

The first round of purchases occurred from May 15 through June 30, 2020, and saw more than 35.5 million boxes delivered in the first 45 days. In the second round of purchasing and distribution, which began July 1 and concluded Sep. 18, 2020, USDA purchased more than $1.781 billion of food through extended contracts of select vendors from the first round of the program as well as new contracts focused on Opportunity Zones in order to direct food to reach underserved areas, places where either no boxes have yet been delivered, or where boxes are being delivered but where there is additional need.