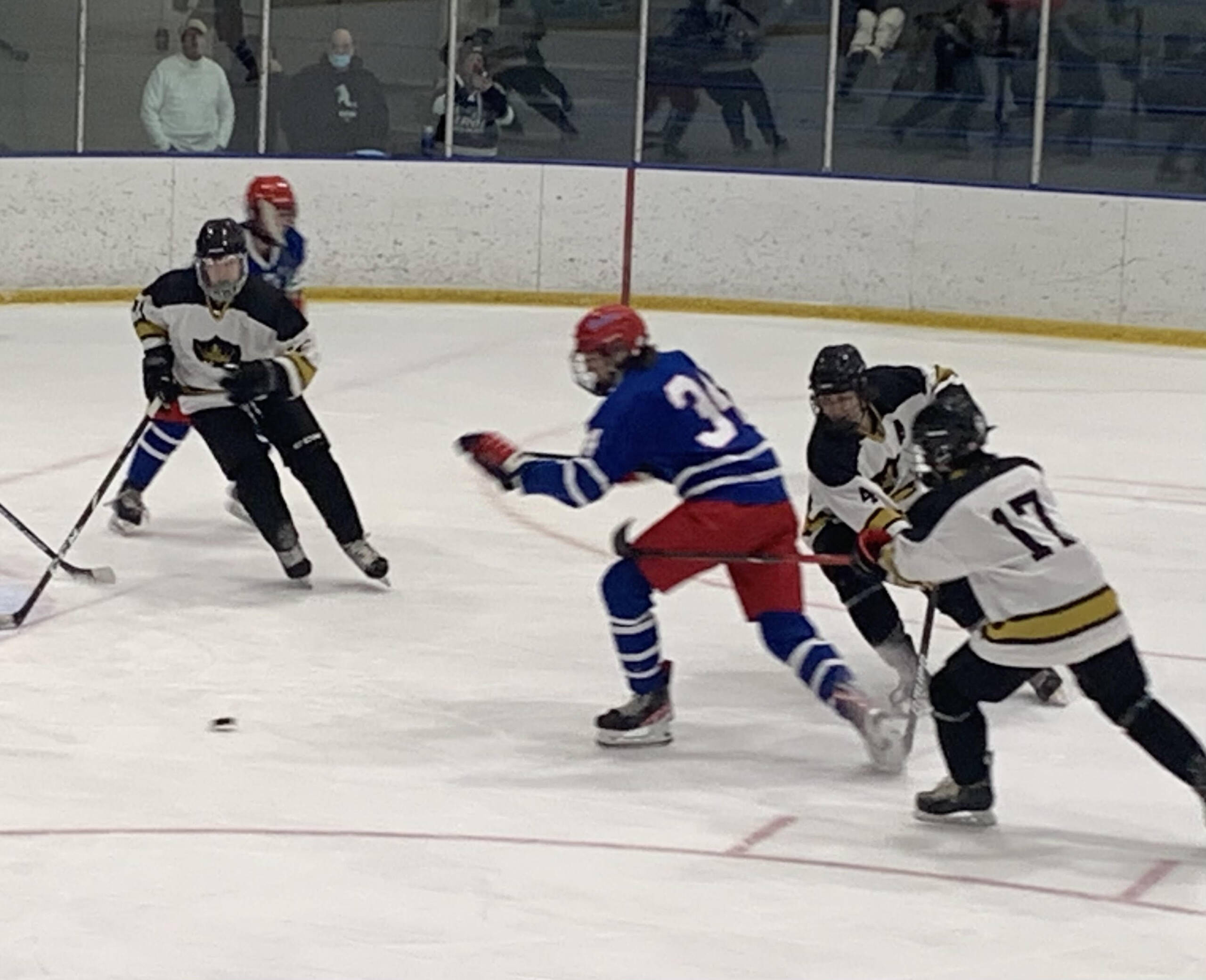 MANCHESTER, NH – The Trinity High hockey team may have gotten off to a slow start this season, but now that they’re building some momentum, the Pioneers are starting to look like a squad to be reckoned with.

Senior Finn McDonough and Junior Aiden Palmeter had two goals each, while junior Ben Canny scored the first goal of his high school career, as Trinity raced past Manchester C-W-M, 6-2, Saturday afternoon at the JFK Coliseum.

After scoring a combined four goals in its first four games (0-3-1), Trinity has scored 10 goals in its last two games, both wins. Pioneers’ Coach Mike Connell said the biggest challenge his club faced during the first part of the season was players missing practice and games and some games needing to be postponed, all due to COVID. 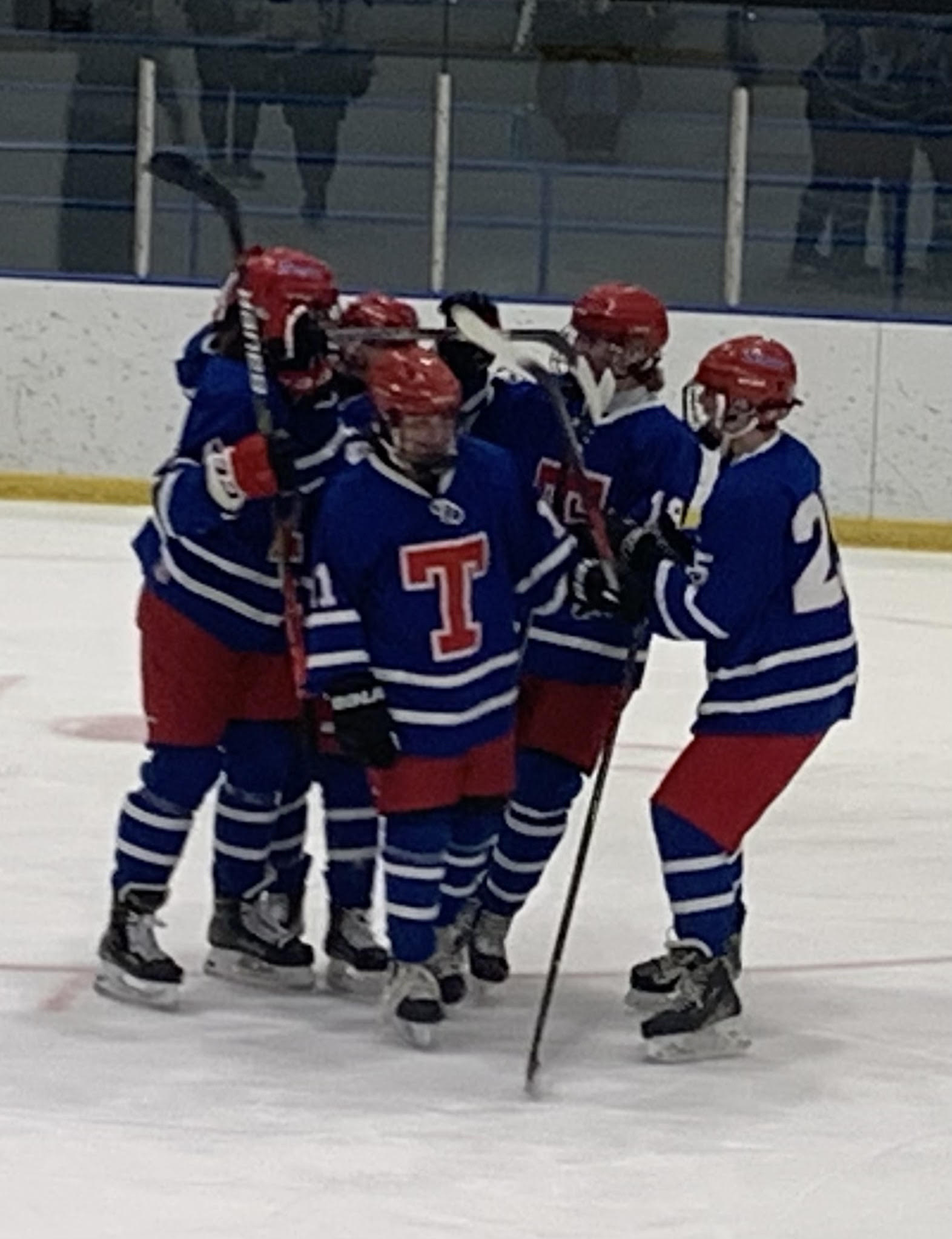 “What I’m most proud of, for both us and Manchester, is to be able to put a game together, even though we’re both missing guys (to COVID),” said Connell. “It’s a testament to the fact that, being a city game, it’s getting everybody’s juices up. A lot of these guys played together when they were little kids, so there’s a little extra something out there.”

Manchester (4-3-0) came into the game having won four of its last five games, averaging nearly five goals a game over that span. But Trinity (2-3-1) dominated from the opening puck drop, outshooting the Kings, 15-4 in the first period and 28-12 over the first two.

Canny got Trinity on the board just 2:05 into the came, taking advantage of a Manchester miscue. Kings’ senior defenseman Aiden Kelley tried to start a breakout by cutting in front of his own net. Canny was in the zone forechecking and, in one motion, poked the puck off Kelley’s stick and past a surprised Manchester goalie Landon Wilson. 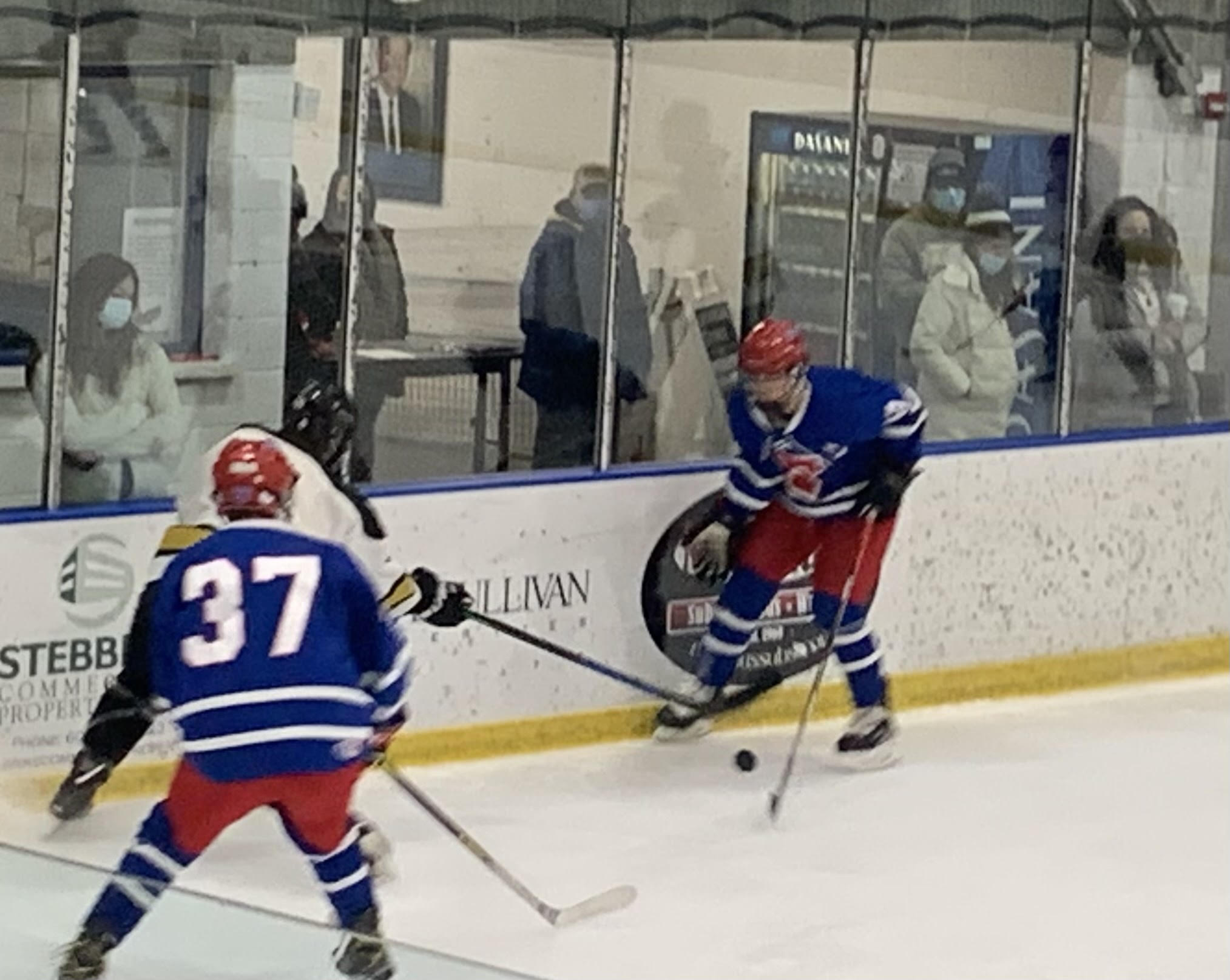 Later, with Trinity on the power play, Wilson made consecutive saves, but Palmeter was right there to bang home the rebound, giving the Pioneers a 2-0 lead.

“Seven penalties,” said Manchester co-coach Eric Fisher. “We cannot continue to put ourselves in the box like that. It just hurts us. It disrupts the flow of our lines. It disrupts the chemistry and continuity of our team.”

One of those penalties was for delay of game, when a Manchester player, attempting to help Wilson, pounced on the puck in the crease with just over a minute to play in the period. The result was a penalty show awarded to Trinity, taken by McDonough. The senior forward tried to go top-shelf but was stoned by Wilson, with a blocker save. 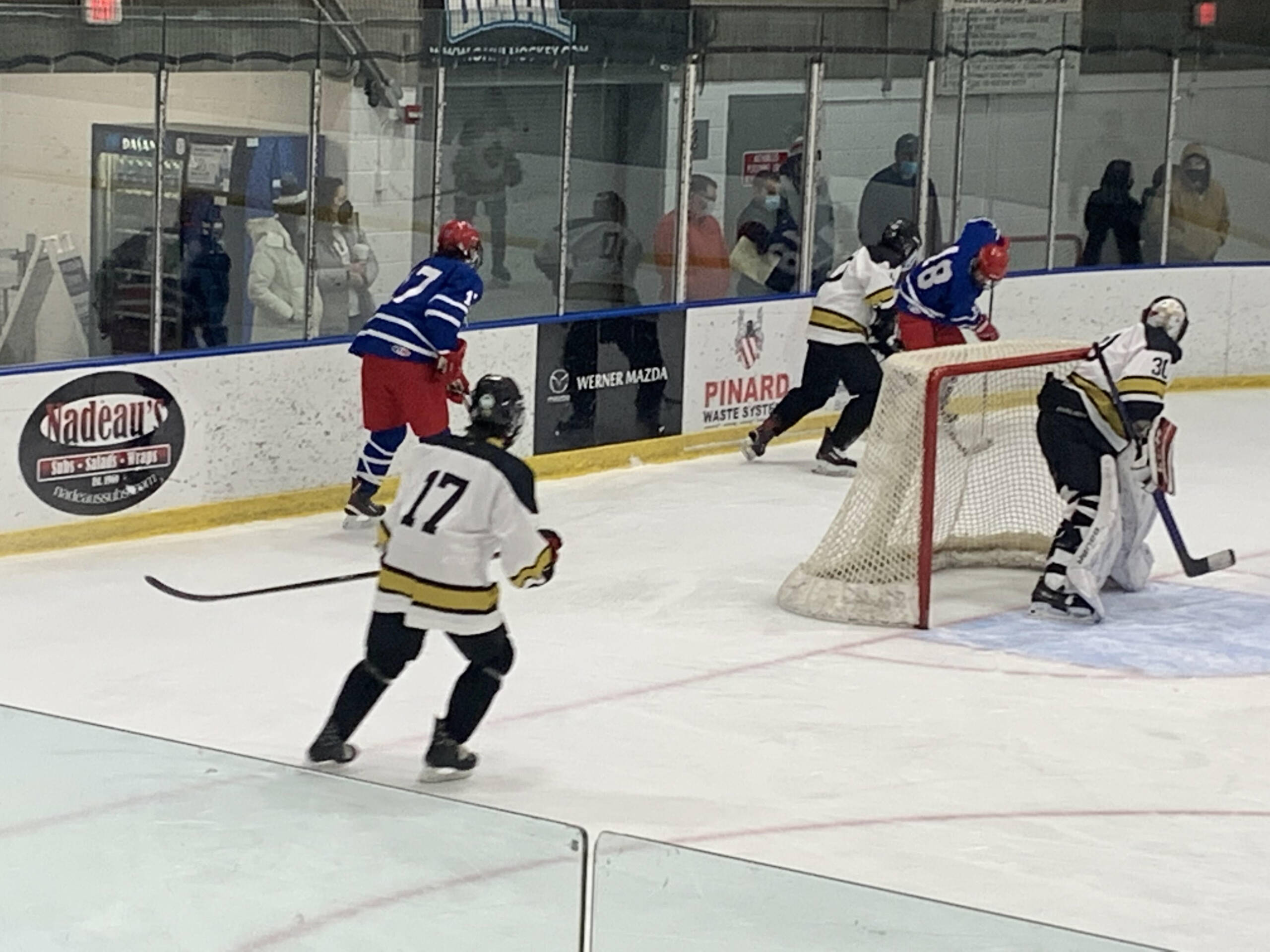 Trinity continued its assault in the second period. Palmeter made it 3-0 less than two minutes into the period, breaking in on Wilson, getting pulled down and scoring as he was sliding along the ice.

Manchester had chances to cut into the Trinity lead, only to be shut down. Sophomore goalie Braeden Lubelcyzk finished with 18 saves but none prettier than a sliding pad save from point-blank off the stick of Manchester sophomore Joe Velez late in the period.

McDonough pushed the Trinity lead to 4-0, less than a minute into the third period with a terrific individual effort. After a Manchester shot was blocked, McDonough gathered the puck just inside his own blue line and bolted down the right seam. As he crossed into the attack zone, he used his body to shield a defender and flipped a shot past Wilson. 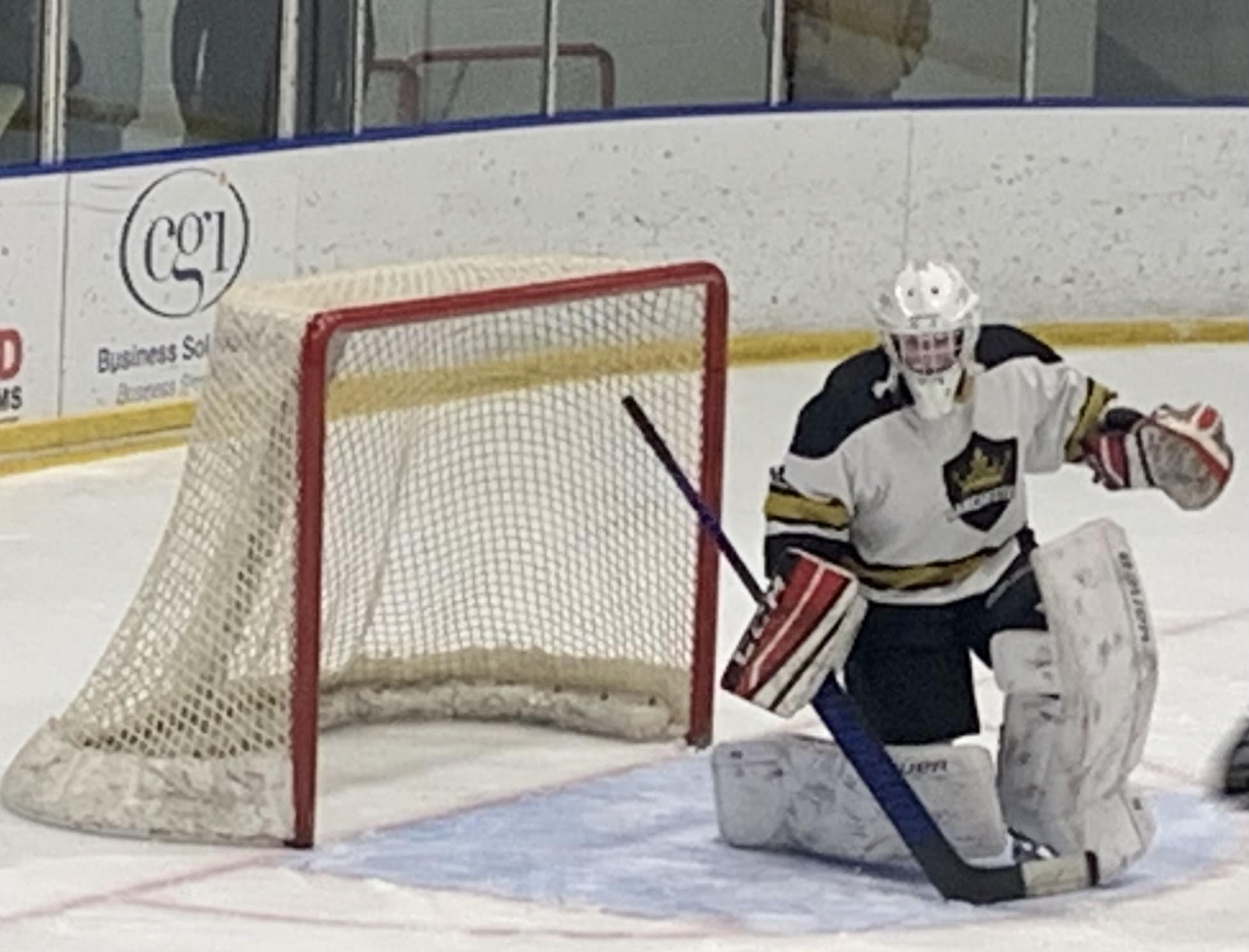 That goal seemed to open the flood gates, Just 13 seconds after McDonough’s goal, Manchester junior Owen Kelley redirected a slap shot by sophomore Mack Tripp, past Lubelcyzk to make it 4-1.

But any momentum the Kings thought they thought they had was short-lived. Just 14 seconds later, Trinity senior Cooper Gaudio scored to make it 5-1. McDonough would later add another powerplay goal before Manchester’s Lukas Tafe scored with 1:31 left to close the scoring.

Manchester will be back in action on Wednesday, at Keene.

Trinity will look to make it three straight wins Monday, when they host Bedford at 4 p.m. 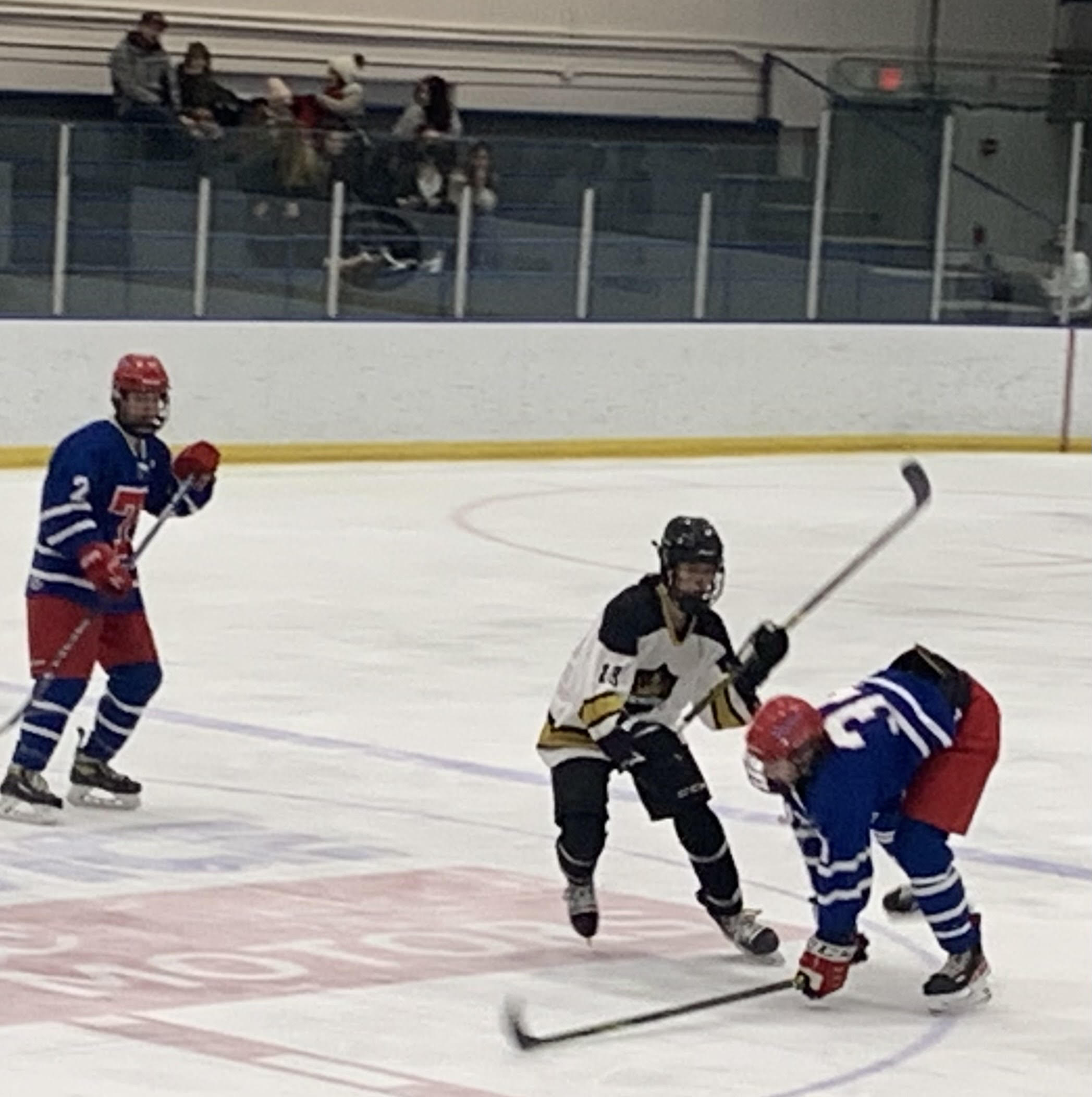