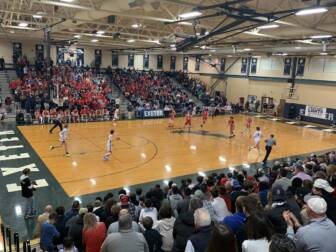 EXETER, NH — Heading into Wednesday night’s Division 1 State Semifinal against Pinkerton Academy, Trinity High Coach Keith Bike talked to his players about playing “fast and free” on offense and using their quickness to their advantage on both ends of the floor.

They understood the assignment.

The top-seeded Pioneers put four players in double-figures and ran the fourth-seeded Astros right out of the jam-packed Exeter High gym, 74-57. Leading by six (33-27) at halftime, Trinity opened the second half with a 14-2 run to go up 47-29 midway through the third quarter. The lead never dipped below double digits the rest of the night. 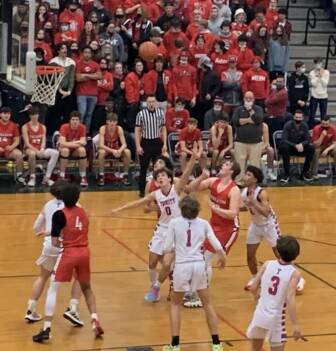 Pinkerton ends its season at 17-4.

“A lot of teams don’t want us to play fast and we want to play fast. And now we’ve got to di it one more game,” said Bike. “We’ve been stressing playing fast and freely. I’m a coach who doesn’t pull guys out for making bad offensive mistakes. I’ll pull kids out if they don’t play hard on defense. So I think they recognize that they can play freely and we’ve just been playing faster and more freely.” 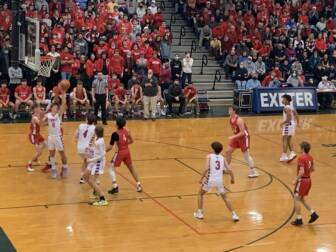 Sophomore DeVohn Ellis, often a secondary scorer in Trinity’s star-studded offense, led the Pioneers with 20 points, including 15 in the second half. He added four steals, a blocked shot and had two of Trinity’s nine 3-pointers.

“Everyone else calls (Ellis) a ‘supporting role’ or a ‘4th option’ but if the kid was on any other team in the state he would be their main scorer,” said Bike. “But DeVohn has bought into that and it’s great to have someone like that who is supposedly a role player.”

Sophomore Tyler Bike had another strong game with 18 points and four assists, while Mark Nyomah dropped in 15. Eight of Nyomah’s points came during the 14-2 run to open the second half. 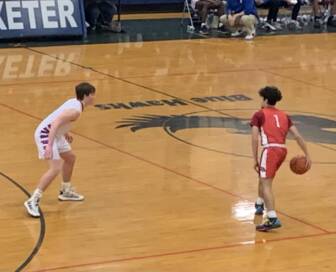 “(Mark) has been so good for us, especially late this year,” said Coach Bike. “He’s grown so much as a player. And his intellectual ability on the court … he’s making the passes he’s supposed to make, he’s recognizing those passes and then that’s opening up his offensive game.”

Trinity had to overcome a herculean effort from Pinkerton’s Anthony Chinn. The junior guard tried his best to single-handedly rally the Astros from a 20-point 4th quarter deficit. Chinn finished with a game-high 29 points, to go along with 12 rebounds and 2 steals. He had 14 points in the 4th quarter, including 10 points as part of a 14-4 Pinkerton run, cutting Trinity’s 59-39 lead to 63-53 with 2:57 to play in the game.

To make the situation a bit more dicey for the Pioneers, Nyomah had fouled out (with 4:36 left), while Bike and Ellis were each playing with four fouls. Still, with the game on the line, the Trinity defense stiffened, holding Pinkerton to a single field goal over the final 2:30.

At the other end of the floor, Trinity’s Connor Herman, Anthony Politi and Bike his six straight free throws down the stretch to put the game away. 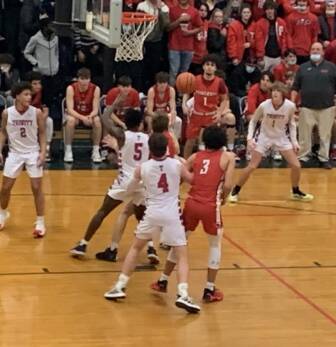 Politi had another solid two-way game. He filled the scoresheet with 12 points, 8 rebounds, 3 steals and a blocked shot. But he also held Pinkerton’s 6-7 center, Jackson Marshall, to just 15 points and 6 rebounds, including just five points in the second half.

Trinity started the game firing away from the perimeter and looking to spread the floor against the much bigger Astros. The strategy paid off as four different players hit from beyond the arc, as the Pioneers built a 16-11 lead after one quarter.

The scoring balance was the story of the game. In fact, all five Trinity starters scored at least five points and had at least one 3-pointer in the first half, as the Pioneers took a 34-27 lead into halftime. 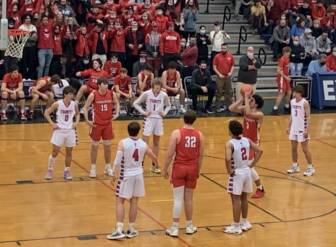