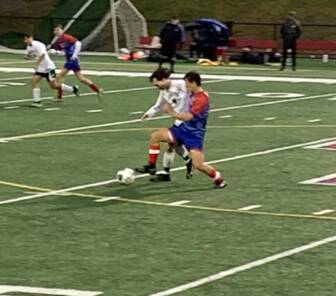 “Survive and advance.” That’s the mantra of every team in a post-season tournament.

That’s exactly what Trinity High managed to do with a 2-1 double-overtime win over Raymond High, in the opening round of the Division III Boys Soccer Tournament, Tuesday afternoon at Derryfield Park.

Junior forward Nate Shipman stepped up to play hero, scoring his second goal of the game with just 16 seconds left to play in the second 10-minute overtime period. Shipman leapt high to get his head on a chip pass from midfielder Tyler Bike and redirected it past Rams’ keeper Will Thompson to end the game after 100 cold, wet, windy minutes. 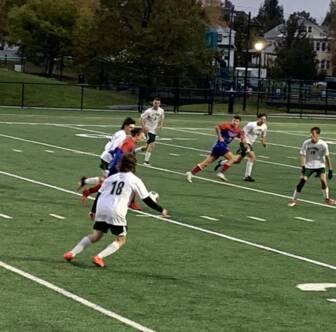 Shipman’s goal propelled the 5th-seeded Pioneers (12-3-1) into the quarterfinals on Friday, where they will meet the winner of Wednesday’s first-round match between No. 4 Conant and No. 13 St. Thomas Aquinas.

“I felt like we should have put this game away a lot earlier than that. It took us a long time, but at the end of the day, I’ll take the win,” said Trinity Coach Phil Tuttle. “That first playoff game, historically, is always tough, no matter who you’re playing. 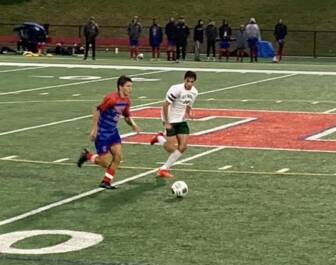 Had neither team scored by the end of the second overtime period, the match would have been decided on penalty kicks, something Tuttle was happy to avoid.

“Anything can happen when it goes to penalty kicks,” he said.

Looking for the first-round upset, Raymond (6-8-1) shocked Trinity by scoring just 12 seconds into the game on a tally by forward Jorge Planas. That goal served as a wake-up call for the Pioneers’ defense, which tightened up its game, forcing keeper Samuel Reine to make just six saves the rest of the game.

As the first half progressed, Trinity began to assert itself. The midfielders, led by junior Quinn Booth, began to dominate their Raymond counterparts and spearhead the Pioneers’ attack. Late in the half, Shipman chased down a long lead pass, headed to himself and broke in clean. But his shot was stopped by an outstanding diving save from Thompson (12 saves). 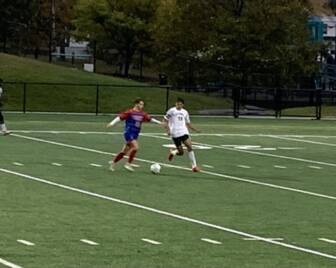 Moments later Trinity was on the attack again. This time it was Booth with the scoring bid, stopped by Thompson. But the rebound popped free and Shipman was right there to drill it home, tying the game, 1-1, at the half.

Trinity dominated much of the second half, keeping the Raymond defense back on its heels and peppering Thompson with shots. Raymond’s back line suffered a big loss with 27:20 left to play, when Brady Potter was hit with a hard shot squarely in the face, knocking him unconscious.

Down a starter, Raymond Dave Elliot substituted frequently in the second half, looking to both shorten the game and keep fresh legs on the field. The tactic worked, to a degree. Trinity carried the play territorially but had a hard time getting clean scoring bids. 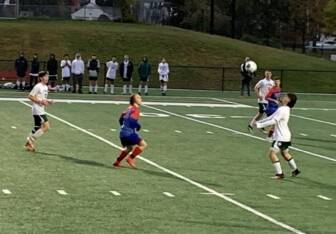 As the clock wound down, Tuttle began to be concerned the match could be decided by some type of fluke play.

“Absolutely, 100%, if you’re not taking care of business on the scoreboard, that can happen,” said Tutttle. “Historically, a lot of New Hampshire playoff games have started that way. One team just seems to be dominating play and playing really well, and the other team just gets that lucky bounce and knocks it in.”

One of those bounces nearly decided the game at the end of regulation. Raymond forward Rory Mitchell found himself with a clean scoring bid with 7:45 left to play but Reine was in perfect position and made the save.