“Versailles represents the apogee of classic French culture. It was the most glorious building in their history, and for women who were possibly descendants of slaves to be the stars in this magnificent gilded chateau…”

I am admittedly an old soul. A lover of creativity and art in many forms, and especially a lover of ‘70s fashion. Why do I love ‘70s fashion? For the same reason that I love Art Deco’s timeless composition. A thousand years from now Art Deco will still reflect indisputable elegance, a Halston dress will still slay and a Saint Laurent wide-leg trouser tuxedo will always always reflect refinement. Put it on. You will look good.

With its gilded Baroque design, golden candelabras and crystal chandeliers, the extraordinary  Palace of Versailles, built in 1631, cradles itself within 30,000 exquisitely-manicured acres. It is located in France, where artists the likes of Mozart performed, and centuries-worth of royalty roamed. It was home to Marie Antoinette and is one of the largest palaces in the world

However, in 1973, a much different set of royalty arrived, dark horses, unexpected, undesired and underestimated, who, against all odds, in less than 40 minutes changed the course of fashion history forever.

Paris is the fashion capital of the world known for its haute couture (french for high dressmaking-done by hand) and masters the likes of Chanel, Dior, Givenchy, and the list goes on. Although departed now, all are still relevant and prevalent in modern times. For centuries the fashion world actively took its cues from Paris, replicating what it observed. Paris called upon its perfected medium of fashion, to the aid of Versailles, which was in desperate need of repair, and what began somewhat as a showcase quickly turned into a competition. America was not seen as home to fashion pioneers, and if thought was given to the American designers, by the French, it was a dismissive air of arrogance. When five French designers (Yves Saint Laurent, Pierre Cardin, Emanuel Ungaro, Christian Dior, and Hubert de Givenchy) competed against five American designers from New York (Oscar de la Renta, Stephen Burrows, Halston, Bill Blass, and Anne Klein) the outcome was the unbelievable true story of the battle of Versailles.

“It was a period of great freedom people were not afraid to be different and everyone mixed together… the art world, the fashion world, the social world”- Marisa Berenson

New York City of the 1970s was an integrated explosion of creativity, where artists became as famous as their patrons. New revolutionary music, disco, was bubbling in underground parties of gay, Latin, and black night clubs. By the time it made its way to the mainstream, Americans welcomed its celebratory relief, releasing pent-up stress due to the end of the Vietnam War.  With its traditional four-on-the-floor percussion and lush climactic orchestrations disco purposefully nurtured a transcendent euphoric experience causing an air of reckless abandonment. Models recall regularly attending disco-infused parties, dancing all night, finally leaving to be greeted by the morning sun.

As the event paid very little, well-known models refused the opportunity. American designers chose an integrated cast of lesser-known models, many of whom were black, including Pat Cleveland, Bethann Hardison, Billie Blair, Jennifer Brice, Alva Chinn (who hails from Boston), Norma  Barbara Jackson, Ramona Saunders, Amina Warsuma, China Machado and Marisa Berenson who were entrenched within the pulsation of a unique melding of culture.

Also present was MGM vocal trainer and coach, Kay Thompson, the woman behind such iconic stars as Judy Garland, Frank Sinatra and Lena Horne, who was to choreograph performances. Fresh off of her Oscar win for Cabaret, Liza (with a “Z”) Minnelli brought her energetic Broadway bravado.

However, New York is not Paris and when the Americans arrive, they face a series of chaotic setbacks. Background scenery had to be scrapped due to an error in calculations dwarfing the set pieces. Americans were given little time to rehearse, as the Parisians monopolized the schedule, resulting in tempers flaring, causing Halston and Thompson to quit for one day. There was no heat, food and drink were scarce, and toilet paper was suspiciously missing. Americans are scantily armed with a fabric backdrop and a cassette for music. 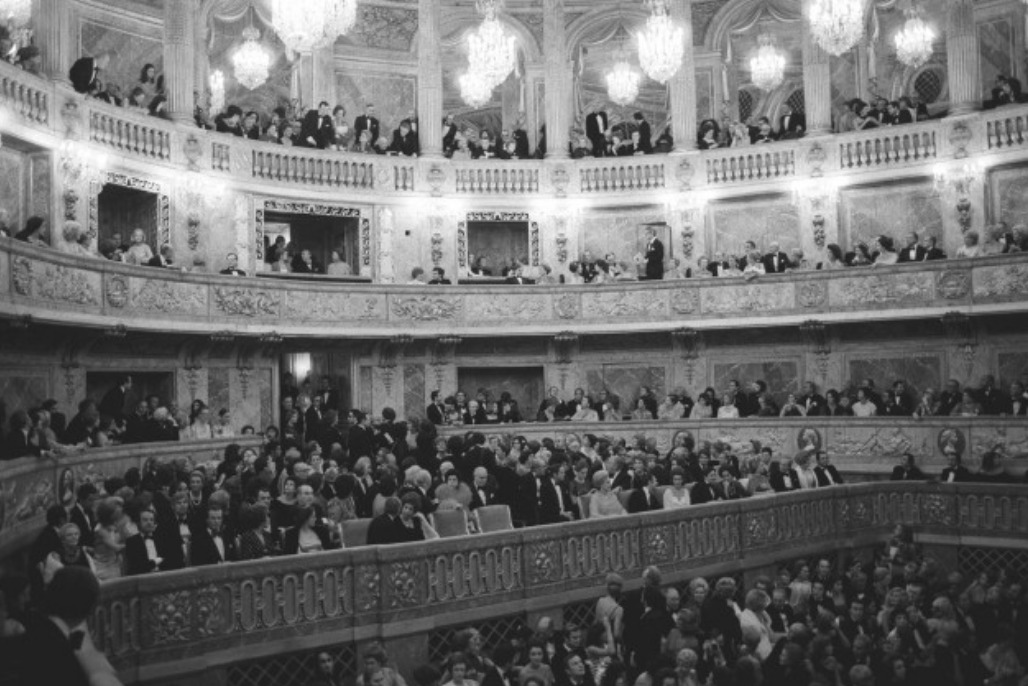 With over 600 guests in attendance, and tickets sold at 1,000 francs, (equivalent to approx $168) it was an evening, literally overflowing in glamour. Amongst the international elite were the Rothschilds, Princess Grace of Monaco, socialites, Hollywood stars and a bevy of bodyguards hired to protect the millions of dollars worth of jewels for the evening.

“You could’ve backed an 18-wheeler up and filled it with the jewels that we saw, there were tiaras and necklaces and bracelets, I mean…unbelievable!”– Charlene Dash

The Parisian’s performance lasted over two hours. The french used elaborate sets, including live reindeer and a live rhinoceros. They launched a rocket and the ladies of the Crazy Horse performed, dropping their fur coats, revealing their nude bodies. Everyone from Maurice Chevalier, the iconic Josephine Baker, Zizi Jeanmarie, and Nureyev took the stage. By a majority of accounts – including the Parisians, comparatively speaking – it was two-and-a-half hours of pretension. More emphasis was paid to the spectacle than to the actual attire with models mostly stationary.

“It was very beautiful but very stiff … that was kind of the way it had been done in French couture houses for 40 or 50 years.” – Tom Fallon

Minnelli appropriately opened the show with the delightfully refreshing, “Bonjour Paris,” a song sung originally by Kay Thompson, Fred Astaire, and Audrey Hepburn in the 1957 MGM fashion film “Funny Face,”  about a New York fashion photographer (Astaire) on assignment in Paris. (If you are a fan of fashion, it is worth watching just for the costumes by Givenchy).

Designer Ann Klien opened the show with ethnically-inspired sportswear, where American models clearly rejected the static frame of their competitors injecting their street-savvy stance into their performance, electrifying the audience.

Bethann Hardison dominated, transfixed on the audience, strutting the stage with ferocity and finally before haute société, forcefully throws her train to the ground in powerful defiance, standing motionless.

“When I threw my train down, I wouldn’t move, it was like, if you all are not going to feel that, then f*ck you! I was defying exactly who they were. This was our moment, they really felt it.” – Bethann Hardison

Traditionally using mostly European models, French fashion shows were silent. Hips were thrust forward creating a fixed carriage, subduing the movement of the body. So when the French were introduced to American designs, coupled with stimulating music and the self-assured posture of the cross-over leg catwalk, where models’ unflinching fortitude fully inhabited their physicality, it became a revelation. The audience overwhelmed in the sensory onslaught, began to cheer, scream, and stomp their feet, tossing their programs in the air.

All these beautiful black girls were just too much for the French, they started screaming throwing their programs in the air!”- Charles Tracey

Halston, famous for cutting on the bias which caused the fabric to graze each high point of the body accentuating the female silhouette (also famous for Jackie Kennedy’s iconic pillbox hat), created gowns of fashion fantasy. Pat Cleveland, garbed in layers of chiffon, twirled from behind the curtain, spinning endlessly in acceleration toward the audience, creating suspenseful tension abruptly stopping on the very edge of the stage.

Oscar de la Renta showed last. Model Bille Blair acts as a genie commanding other models to come to life, guiding them along the stage, appropriately accompanied by the No. 1 R&B song in America at the time, Barry White’s Love’s Theme. Imagine, watching lanky models, in fluid silk crepe gowns which swayed and billowed with the slightest movement, each gliding, floating in step, possessed by melodic scrolling violins as members of the audience are hearing, some possibly for the first time, the enrapturing, soul-caressing Love Unlimited Orchestra.

The show climaxed with Minnelli’s musical closing. Models recall an exuberant audience of royalty – princes, and princesses, dukes and duchesses – and the crème de la crème cheering, screaming, stomping their feet and throwing programs in the air.

“It didn’t sneak up, it shocked, it happened that fast-it was bang slap! It left you speechless!”- Carla LaMonte

Almost 50 years prior, another ebony arrival created shock waves internationally, performing her world-famous banana skirt dance, becoming one of the highest-paid performers of her era. Now in her late 60s, Josephine Baker performed that evening to much acclaim. Due to racial inequality in America, Baker became a citizen of France, aiding in the resistance during the war. At the end of the evening, Baker visited backstage, praising the Americans for their performance. Billy Blair, with tears in her eyes, recalls Baker gently stroking her face as if passing on her torch. Two years later, Baker passed away. She was the only American-born woman to receive French military honors at her funeral.

“We had no staging, we had no rockets we had no good lighting all we had was the core of who we were, and so the designers decided to take the theme of who we were and they put us out front. We were their arsenal, we were what no one else had, so the thing that may have been thought a flaw, became the pearl” – Pat Cleveland

Could it be possible for the Americans, who were clearly sabotaged with no sets, hardly any rehearsal time, and unconventional models, to conquer Paris at their own impeccably executed artistry? Models and attendees explained, it wasn’t the designs alone that won the evening; it was the juxtaposition in the way the designs were presented. The French erred on the more traditional slant of tableau vivant, where coture was basically observed, looking to the past for their inspiration, while the Americans let their designs promenade, unfettered, future-forward, declaring in steadfast authority the unmistakable arrival of American fashion.

This article was based on content from two separate Battle of Versailles documentaries:

Further Reading: “The Battle of Versailles: The Night American Fashion Stumbled into the Spotlight and Made History” Pulitzer Prize Winner Robin Ghivan (Amazon).