In following this column, you will know Singing in the Rain was my true introduction to musicals. However, upon further pondering, it turns out that the most famous, most elegant, most flawless dancing partnership known the world over, Fred Astaire and Ginger Rogers, was introduced to me by the characters Luis and Maria of “Sesame Street.” 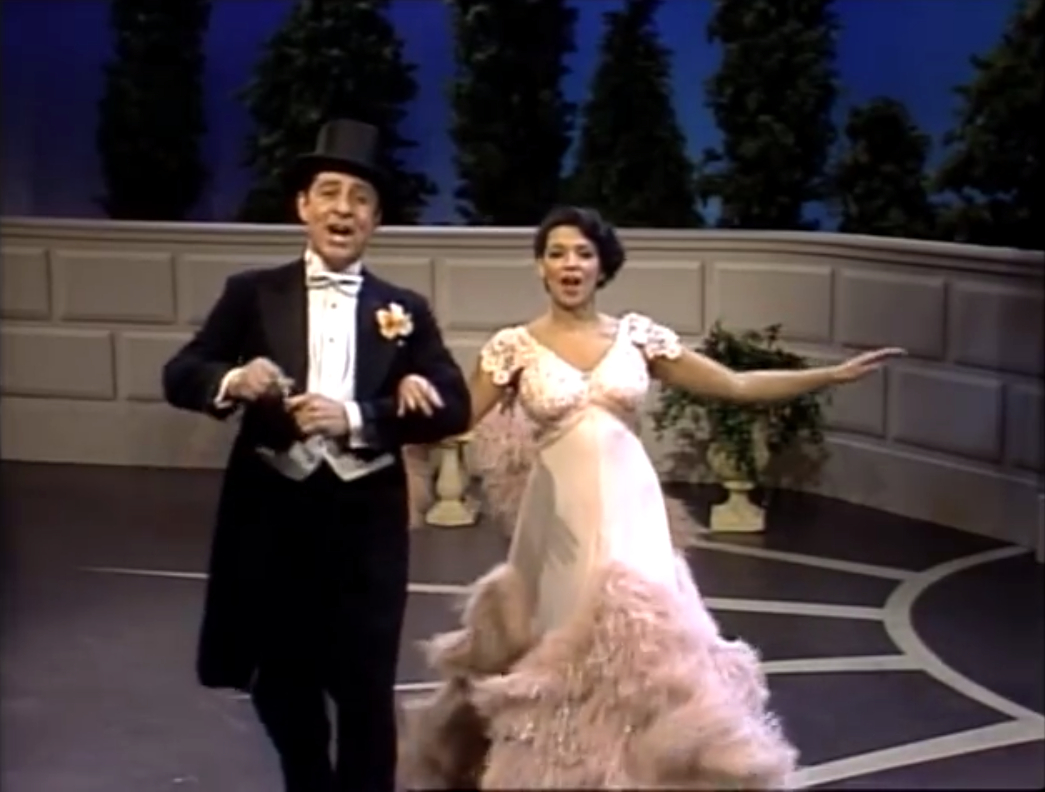 Like most children my age, and during the infancy of cable, “Sesame Street” was a television staple. I knew skits by heart, and I can certainly still recall every nuance of “One-two-threee, four, five, six-seven-eight, nine-ten, eleven, twelve,” with accuracy. There was one sketch, however, that caught my attention each time, without fail. Luis and Maria spoofed one of the most famous Fred and Ginger routines, from the movie Top Hat, complete with elegant costuming, orchestration and sets, performing the song Hola. I distinctly remember not having any explanation as to why this particular sketch constantly captured my attention, but it didn’t matter, because it simply “did.” I wouldn’t learn why until almost 20 years later. 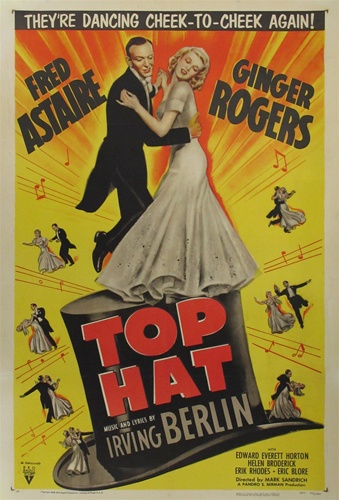 When I finally watched the classic movie, Top Hat, I immediately recognized the set as being the same one I recalled on “Sesame Street,” and instantly understood why the child in me was enraptured. The puzzle fit together like Tetris pieces. It seems the classic movie fan within was a part of me at a much younger age than originally professed. In Luis and Maria’s performance, I was exposed to the most famous dance team in history, Fred Astaire, and Ginger Rogers.

The top-grossing 1935 Astaire film – second only to Easter Parade (if you are unfamiliar with Easter Parade, you can catch up here) –  Top Hat is considered the most well known Astaire and Rogers pairing. Jerry Travers (Fred Astaire) is a dancer who stars in a show produced by Horace Hardwick (Edward Everett Horton.) He meets Dale Tremont (Ginger Rogers) and is stricken. A case of mistaken identity leads to comedic situations. Banes (Eric Blore) the cantankerous butler, quips a famous line from this movie: “We are Banes, sir.” Notice the high-comedy exchanges and quick dialogue, an Astaire-Rogers movie formula staple, between characters accented by double takes. Alberto Beddini (Erik Rhodes) plays a designer who employs Dale as a clothes horse, to promote his fashion line. Madge (Helen Broderick, former real-life Ziegfeld Girl) is Hardwick’s clever, advice-giving, matchmaking wife, and friend of Dale.

Produced by Pandro Berman, with music and lyrics by Irving Berlin – who could only play the piano in one key and had no formal musical background training whatsoever – is noted as one of the top lyricists of the 20th century. A perfect example of his talent is the song Cheek to Cheek, in which triple-rhyme schemes are used. Art direction by Van Nest Polglase, who creates a fantasy-filled, two-story Art Deco bacchanalia set that is so immense, the adjoining sound stage needed to be used to contain it. Complete with a waterway, gondolas, and bridges, the sets mirrors the elegance of the characters.

At the crescendo of the spellbinding Cheek to Cheek number, after Rogers completes her third and final sweeping “skirt dancing” swing, during its most sensual segment, Astaire dips Rogers and her body goes limp, clearly surrendering to the moment, the delay is purposeful to punctuate the intrigue. As Astaire slowly raises her, in soft sophistication, and they complete the sequence, both are clearly stating their intentions and the conversation is understood. One does not need to be a classic film buff to appreciate the sheer elegance, genius and beauty of this particular scene, as it is masterful.

Rogers, a fashionista in her own right, clearly understood how the correct dress could accentuate her dancing and this is not lost in any capacity during the Cheek to Cheek number. Rogers designed the gown herself for the express reason of how it would come across on film. Look at those feathers … soft and feminine, accenting her movement by their simple delay, in mirroring her undulation. Ginger’s gown romantically sways and floats, adding a third character to the scene. Notice her absolute trust in Astaire’s lead, causing flawless alignment. The famous “feather dress” was a point of contention between the duo, as feathers flew off the gown landing on Astaire’s tuxedo. There is a slight lag in dialogue at the end of this sequence as Ginger appears to be in contemplation. This, too, is also purposeful. Production company RKO knew audiences needed “space” for their applause without missing any dialogue.

The 1933 “Flying Down to Rio” is Astaire and Rogers first movie together, and they have fourth and fifth billing. They have one dance sequence throughout the entire film and when audiences witnessed them together, they burst into cheers and applause. RKO recognizing the relevance of the public reaction, captured lightning in a bottle, creating the most famous dancing duo in history. They star Astaire and Rogers in a string of hits that dominate the box office for almost a decade, creating an unsurpassed, iconic, timeless partnership.

Surprisingly, the pair claim they were never romantically involved. In fact, RKO regularly drummed up false news of their temperamental off-camera relationship for the tabloids in order to feed their stardom.  Conversely, Astaire and Rogers were very good friends for the remainder of their lives. Rogers is quoted as stating, “I adore that man…and he knows it!”

Astaire, a former dance partner with his sister Adele well before his beginnings with RKO, choreographed each number along with Hermes Pan, who shared an unlikely dead-ringer resemblance to Astaire, often being mistaken for the actor, assuming Rogers dance steps during rehearsal. Rogers, known as a quick learner, who is thought of incorrectly as Astaire’s creation, brilliant in her own right, was actually extremely well established herself before the pairing, going on to win an Oscar in her performance of Kitty Foyle after the era of Astaire and Rogers came to a close.

The success of the Astaire and Rogers franchise was a winning formula of character actors, producers, directors, writers, designers, and cameramen, that were used exclusively for the series of films, creating spectaculor cinematography. Although the same basic formula was used, audiences truly went to these films to be swept into the elegant Art Deco-filled romance and witness the pair glide on air together, in a desperately-needed respite from the current circumstances of the Depression, lifting their spirits, which is precisely what the movie musical allowed.

One of my favorite scenes is the closing scene. Observe the energy between Astaire and Rogers. Carefully watch Rogers expressions showing authentic delight as Fred commandingly whirls Rogers off camera. This is the exact reason why Fred and Ginger, “are” Fred and Ginger. An authentic pairing that proves the dance is not only a dance … it is a conversation, impeccably executed by a stellar production team and the incomparable, iconic pairing of Fred Astaire and Ginger Rogers.