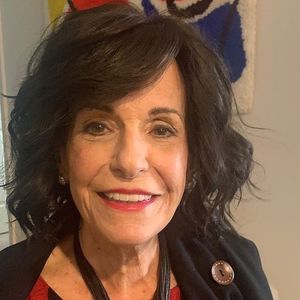 Born on March 2, 1951, Toni grew up in Oceanside, NY, before marrying the love of her life, husband Bernie, and moving to New Hampshire where she spent more than 30 years as a teacher at Amherst Middle School. Toni would tell you that her marriage of 47 years was based on the saying “behind every successful man is a stronger woman.” Together they have three daughters, Amy, Norri and Debra and they beamed with pride for them. Her daughters were her biggest achievements in her life. Toni’s sons-in-law James Elterman, Danny Oberlander and Adam Fox, were sons she grew to love like her own. Toni was also blessed by being Nana to grandchildren Seth, Bella, Andraya, Shayden, Sydney and Cameron.

As strong as Toni’s love of family was, so was her commitment to her friends. She was everyone’s cheerleader, friend and therapist. She was always the life of the party and, with them, she shared her passions of New York, Broadway, and traveling the globe. Toni also had a strong presence and connection with New Hampshire’s Jewish community, where she was a member of Temple Israel Manchester for over 40 years. Her passing has left an enduring mark on all the people she touched throughout her life and she will be deeply missed.

On Thursday, August 12, Condolences to the Family will begin at 2:30 p.m. followed by a funeral service at 3 p.m. at Temple Israel Manchester, 66 Salmon St., Manchester. Burial will follow at Hebrew Cemetery on South Beech Street. Shiva call will be held immediately after the funeral through 8 p.m. on Thursday and Friday from 10 a.m. through 8 p.m. at the Oberlander Household in Londonderry.

Lambert Funeral Home & Crematory, Manchester, is assisting with arrangements. Services will be streamed online at www.templeisraelmht.org or https://youtu.be/Ul2EcexapBI

In lieu of flowers, contributions in Toni’s memory can be made to Temple Israel Manchester, 66 Salmon St., Manchester, NH 03104 (Memo: General Fund) or you may donate via PayPal. To send an online message of condolence, please go to www.lambertfuneralhome.com.